‘Crimes of the Future’ (2022): The Master of Body Horror Returns to His Roots 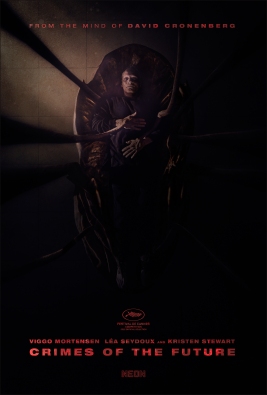 Well before I realized my interest in crime dramas and David Cronenberg transitioned to melodramatic, psychological mobster movies, I was into creature-features, horror movies, and oppressive science-fiction. Cronenberg, perhaps the most successful Canadian filmmaker prior to the ascension of James Cameron and Denis Villeneuve, has been one of the most prolific writer-directors of the past half century with 22 features to his credit, over half of which consist of movies from the “body horror” genre. Body horror on screen involves intense visual dissections, if not desecrations of the human body, reveling in how a director and his special FX team break their human characters down to their elements and construct narrative meaning from their transformation. Thanks in large part to Cronenberg’s innovative body of work from the 1970s-1990s, the body horror subgenre has maintained both a gory and hypersexual connotation, almost sadomasochistic in terms of its narrative overtones and how its actors approach their roles. Contemporary descendants of this style of filmmaking include the likes of Julia Ducornau, Gaspar Noé, Jordan Peele, Ari Aster, and Guillermo Del Toro, amongst others.

Kristin Stewart (right) expresses her admiration for the performative surgery of Seydoux (left) and Mortensen (center).

Since the turn of the millennium, however, Cronenberg shifted his auteur focus from the science-fiction and horror genres to various types of more mainstream, dramatic cinema, including two of my favorite crime dramas of the 2000s and his first of now four collaborations (and counting… ) with Viggo Mortensen, A History of Violence (2005) and Eastern Promises (2007). His style retained the violent, uncensored bite of his earlier body horror works (the gore FX of A History of Violence’s gruesome murders are some of my favorite to this day), but the narrative focus of his newer films evolved well beyond his monster-metamorphosis movies (e.g. Fly [1986]) or batshit insane worldbuilding (e.g. Scanners [1981], Videodrome [1983]).

Then 2022’s Crimes of the Future (no thematic or narrative connection to his 1970 sophomore film of the same name) arrived this summer with perhaps Cronenberg’s trendiest cast yet; set in an unspecified future where advanced biotechnology and bizarre analog computers interface with everyday bodily functions, where humans have somehow evolved past most symptoms of physical pain or infectious disease, experimental performative surgeries to augment, decorate, and dissect the human body have gained popularity as a sort of underground “punk” art form. The principal narrative follows a quasi-romantic couple of surgical performance artists, Mortensen and female lead Léa Seydoux, to celebrate yet also excise various inexplicable novel organs the former’s body spontaneously generates from time to time. Working behind the scenes of our main characters are additional government and reactionary forces seeking to weaponize humanity’s recent evolutionary changes for their own political gains, and sooner or later creepy, bloody violence ensues. David Cronenberg is back, baby!

In all seriousness, Crimes feels like a blast from Cronerberg’s past, as if the filmmaker used a time-machine to travel back to the 1980s with several modern actors like Mortensen, Seydoux, and supporting actress Kristin Stewart. The only handheld camerawork I recall are a few seconds’ worth of diegetic “found-footage” recordings made from Seydoux’s point of view, with plentiful camera pans on locked tripods and slow, deliberate dollies taking the place of what would be extensive SteadiCam oners in a Ducornau, Noé, or Peele film. Much greater attention is paid to blocking and set-design; Mortensen’s hooded, skulking figure hides in the corner of most scenes like a larger, more handsome version of Andy Serkis’ Gollum, and characters often happen upon him like a person discovering a random silent cat in an alleyway.

Fans of Cronenberg’s classical body-horror style will therefore feel right at home in Crimes, but I also noticed many weaknesses of this particular style that connect to some of his lesser entries from 1970s-1980s, as well as the unsatisfactory conclusion of this story. As fascinating as the movie’s bizarre, postmodern props, set-design, and social commentary can be, part of the reason Crimes‘ throwback tone feels so authentic is due to how cheap the movie looks; maybe Cronenberg had a budget of $150 for costumes, $215 for on-location photography, and perhaps $65 for blood and gore FX, because the entire movie looks like it was shot in and around a single dilapidated warehouse, and I have no sense of the greater diegetic world outside this small cast of characters. Even the movie’s body horror sequences are modest compared to Cronenberg’s most famous set-pieces, such as Scanners‘ spectacular cranial explosion and Goldblum’s monstrous final form in The Fly. To that end, Crimes ends at what feels like the close of the narrative’s second act, its script truncated in the way that Videodrome prematurely ended also perhaps due to budget constraints. 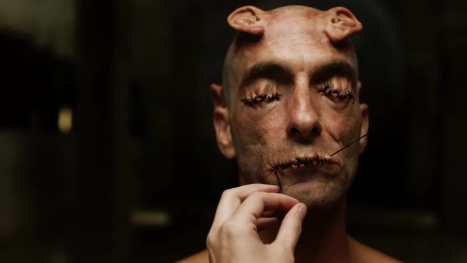 Ewwwww, goes the audience before the dance of the “Ear-Man,” one of several artistic displays of body horror throughout Crimes of the Future.

I would therefore classify Crimes of the Future as middling David Cronenberg at best, admirable in its thematic depth, retro visual style, and performances but too limited in scope thanks to both narrative and directorial shortcomings. I appreciate the film’s modest, straightforward mindset, but its cheapness becomes a distraction rather than a charm at a certain point, while the overall story feels incomplete in its current form. As excited as I was to experience the man’s first science-fiction horror feature since 1999’s eXistenZ, Rottentomatoes.com captured the essence of this film perfectly: Quintessential yet not classic Cronenberg.

SUMMARY & RECOMMENDATION: David Cronenberg recaptures the identifiable look and tone of his earlier claims to fame, not to mention the weird characters, weirder performances, and modest (we’re being kind) scale of a seedy, grimy world where explorations of the human interior are artsy, cool, and highbrow.

— However… I’m tempted to describe Crimes of the Future as a feature-length student film given its backdrop, costumes, and truncated narrative. I have no idea what the world feels like beyond this decaying industrial beach community.

? We can all eat plastic now, but can we eat all kinds of plastic?