Though Canadian auteur, David Cronenberg, established his signature body-horror style in the 1970s and 1980s with films like The Brood (1979), Scanners (1981), Videodrome (1983), and The Fly (1986), since the turn of the millennium, he has largely transitioned to dramatic filmmaking and crime thrillers. His filmmography profile has risen as a result, and many of his older cult hits have become recognized as influential, creative pop culture classics in their own right, much the same way John Carpenter’s vintage body of work has gained appreciation in hindsight. 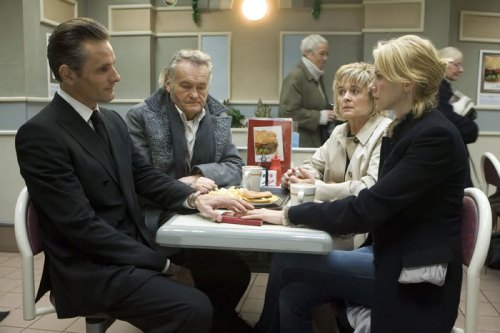 I am a huge fan of his 2005 film, A History of Violence, his first collaboration with international acting phenom, Viggo Mortensen, which despite shedding Cronenberg’s now recognizable science-fiction/body-horror tropes, maintained his original pulpy, gory, violent aesthetic. Cronenberg’s attention to detail in portraying hardcore cinematic violence, namely his appreciation for staging hit scenes, his knack for building suspense, and his love for low-budget practical FX like liquid blood squibs, extensive gore makeup, and almost nauseating sound editing, make him a natural fit within the crime drama. Perhaps more independent genre enthusiasts should try their hands at high-concept crime sagas.

Cronenberg’s next film, Eastern Promises, is a similar yet unique gangster opera concerning the Russian Mafia and second-generation Russian immigrants in the United Kingdom. Specifically, it follows the story of a midwife (the impeccable Naomi Watts) who delivers the baby of a drug addicted teenage Russian prostitute lured into the sex trade by the aforementioned Russian crime syndicate. Given Watts’ character’s own recent complications with pregnancy, she feels drawn to the child upon her mother’s tragic death in childbirth; the plot thickens as she uncovers unsettling mysteries behind the mother’s backstory and is threatened by the same Russian mafia.

If that doesn’t sound like an intriguing premise, I don’t know what does. Eastern Promises is bolstered by terrific performances from Viggo Mortensen, Vincent Cassel, and Armin Mueller-Stahl as members of the local Russian mob. They are disturbing in their depiction of decrepit yet complicated monsters, working within this dark labyrinth of blood ties, intimate criminal hierarchies, gruesome criminal violence, and languishing in the corruption of innocence.

Perhaps my favorite aspects of the film’s visual design are its set-locations and the symbolic tattoo culture of the Russian mobsters. For those who don’t know, the Russian Mafia (as well as many other organized crime syndicates) use elaborate tattoo artistry to signify gang membership, criminal history, organizational trophies, and showcase black-market skills. Tattoos’ significance with regards to social status is a running motif throughout Eastern Promises, providing an added visual element to both the narrative’ thematic progression as well as its characters’ development. These extensive tattoos are juxtaposed with memorable set-designs in lush restaurants, a seductive steam bath, and melancholic, rain-soaked London streets. Cronenberg’s ability to take the ordinary, everyday elements of life (tattoos, formal clothing, pedestrian locations) and transform them into either dangerous crime elements or color-saturated, emotionally rich character moments, is a testament to his visual eye and the thematic potential within Steve Knight’s screenplay.

As for the characters themselves, they are brought to life by an international all-star team. Vincent Cassel is oddly sympathetic as an otherwise deplorable mafia brat, and his twisted, jealous father-son relationship with Mueller-Stahl and close friend Mortensen is captivating. The latter showcases some of the best acting and accent work by an American screen-actor since Marlon Brando. Mortensen is the standout of this film, both in his complicated relationships with Cassel and Watts, as well as in his dark, brooding demeanor in general. Mueller-Stahl plays a character less complicated than his costars, but it’s his monstrous antagonism that makes up for that lack of complexity.

Top: Mortensen receives inked confirmation of his official induction into the Russian vory v zakone. Bottom: But later, is targeted for a hitjob in a local steamhouse.

Finally, Eastern Promises boasts another terrific score from veteran composer Howard Shore, who writes a beautiful, haunting Slavic-style symphony composed of distinctive string elements, Eastern Orthodox choral hymns, and subtle piano tunes. It is one of his most nuanced and memorable scores since The Lord of the Rings (2001-2003).

Any and all crime drama enthusiasts should have a great time with this movie. David Cronenberg continues to diversify as a filmmaker, and at this point has developed a penchant for strong, dark, thematic mob thrillers. It features standout performances from Naomi Watts, Vincent Cassel, and Viggo Mortensen, three Academy Award-caliber actors from Britain, France, and America, respectively, and ties its morbid, seductive story together with unsettling visual imagery and a bravado ethnic score from Howard Shore. You’d have to be a Siberian sucker to pass this one up.

SUMMARY & RECOMMENDATION: Put simply, Eastern Promises is one of the best crime dramas of the 2000s, along with David Cronenberg’s A History of Violence. Naomi Watts is perhaps the greatest living Western actress, and though she’s not exactly challenged with this protagonist’s role, she’s sympathetic and readily likable. Vincent Cassel plays a memorable scumbag, while Viggo Mortensen expands his multinational, polyglot filmmography. Few aesthetic touches are slicker than this film’s audiovisual style.

? My name is Tatiana. My father died in the mines in my village, so he was already buried when he died. We were all buried there, buried under the soil of Russia. That is why I left — to find a better life.