‘Reign of Fire’ (2002): One of the Weirder New Millennium Blockbusters

Most people who came of age in the 2000s knew Matthew McConaughey as “that handsome guy” in various romantic comedies like The Wedding Planner (2001), How to Lose a Guy in 10 Days (2003), Failure to Launch (2006), Fool’s Gold (2008), and Ghosts of Girlfriends Past (2009), all of which achieved some middling level of box office success. Those forgettable cookie-cutter movies were a far cry from the man’s dramatic breakout films like A Time to Kill (1996), Contact (1997), and Amistad (1997), and solidified his status as a derivative sex symbol until the fabled “McConaissance” of the early 2010s (see Magic Mike, Mud [both 2012], Dallas Buyers Club [2013], True Detective, Interstellar [both 2014]). For myself, however, I will always remember Matthew McConaughey — and to a lesser extent, Christian Bale and Gerard Butler — as “that dark, brooding weirdo” from Reign of Fire.

Left: Christian Bale aims at a male dragon with a crossbow armed with an explosive head. Right: Earlier in the film, Bale examines an egg pulled from the body of a dragon corpse.

Reign of Fire was, on the surface at least, a movie tailor-made for preteen me. A post-apocalyptic movie about a 21st century world ravaged by dragons, in which a rag-tag group of survivors must battle them with modern weaponry, seemed like the coolest thing to me back then. The movie as a whole is nowhere as exciting as its action-packed trailers had audiences believe, back in the day, and while its impressive special FX have aged well in the years since its release, its dull, plodding narrative remains as disappointing now as in 2002.

On some level, Reign of Fire deserves respect for its novel, if somewhat gimmicky premise — fire-breathing dragons as antagonists in a contemporary setting — as well as its restrained scale. Its lack of any FX-heavy set-pieces is remarkable by today’s standards, and was likely necessary due to the limited capabilities of computer generated imagery (CGI) in the early 2000s. As baffling as its narrative pace and depressing as its tone are, it’s easy to imagine a schlock-filled, CGI mess akin to other early 2000s blockbusters, such as Hulk (2001), Daredevil (2003), The Matrix Reloaded & Revolutions (2003), The Day After Tomorrow (2004) etc.

Perhaps the most surprising quality of Reign of Fire was and remains its star studded cast, even by new millennium standards. Christian Bale hadn’t yet become the face of Christopher Nolan’s Dark Knight Trilogy (2005, 2008, 2012), nor had McConaughey starred in much Oscar-bait; yet, the former’s lead performance in American Psycho (2000) and the latter’s breakout legal dramas weren’t in the distant past, either. Watching such big-name stars in such an off-kilter, genre-heavy, mid-budgeted feature makes for a bizarre viewing experience in hindsight. Still, their highbrow acting talent, even if not as appreciated back then, is a major strength of Fire, and is further bolstered by a capable though underused supporting cast, including a then unknown Gerard Butler (his breakout role in Zack Snyder’s 300 [2007] would soon follow) and former Golden Eye (1995) Bond-girl, Izabella Scorupco.

The movie’s single greatest strength, however, is director Rob Bowman. Bowman made his name in television, directing over a dozen episodes for Star Trek: The Next Generation (1987-1994), over thirty episodes for The X-Files (1993-2002, he also directed its eponymous 1998 feature-length film), and has largely stayed in that medium for the bulk of his career. He’s a solid director with an eye for visuals and a feeling for tone, and he handles Fire’s extensive digital FX and considerable productions values (a $60 million budget) well. As intense as Reign of Fire’s memorable actions scenes can be, the geography of each sequence and the blocking of all the actors are crystal clear, and each set-piece has a distinct beginning, middle, and end, building tension throughout. 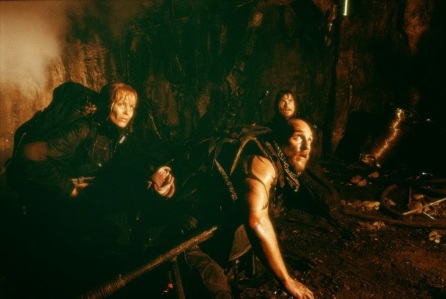 It’s a shame, then, that Bowman’s talent behind the camera is wasted outside those action sequences on a lackluster story. The main cast have great chemistry and plenty to do regardless of whether they’re shooting at dragons or not, but Adrian Biddle’s composed cinematography is left to whither and die on a plodding, lifeless script that lacks narrative cause and effect. The overall story feels like the highlights of a season of a television show, where each act feels like the cinematic equivalent of… “and then, and then, and then… .” I wonder if the film’s disconnected, quasi-episodic structure is a result of budget cuts, last-minute script-rewrites, or other logistical hurdles that limited the scope of the story. The expository montage sequence that follows the film’s memorable prologue feels haphazard, and Bale’s accompanying voiceover, impromptu, so perhaps the final cut released into theatres was a smaller version of another movie.

In any case, Rob Bowman’s Reign of Fire is one of the few blockbusters from the early 2000s with big stars and an inventive premise that failed at the box office, but whose prominent special FX have stood the test of time. I go back and forth over whether I prefer this film’s incarnation of dragons to that of Game of Thrones (2011-2019), but the fact this movie’s fire-breathing antagonists are even comparable to that show is noteworthy. Outside of its action set-pieces, however, Reign of Fire fails to take advantage of its talented director and memorable cast because of either bland screenwriting, production limitations, or a combination of the two. The result is a middling 2000s action flick that looks good, gets fair mileage out of stars Christian Bale and Matthew McConaughey, and does what it can with a weird premise. At least they tried. At least this movie proves how cool McConaughey was long before his 2010s McConaissance.

SUMMARY & RECOMMENDATION: Reign of Fire is the sort of off-key, mid-budgeted action film Western studios don’t make anymore, which would be sadder in this case if not for the film’s lackluster narrative structure, slow pacing, and questionable internal logic. Still, Rob Bowman directs the hell out of the movie’s set-pieces and takes full advantage of Bale and McConaughey’s considerable range, establishing an unappreciated benchmark for dragons on film that wouldn’t be rivaled until a minor HBO show released a decade later.

—> ON THE FENCE: The film is worth seeing if you’re a fan of monster-movies or fantasy creatures in general, but others may find Reign of Fire’s drab, depressing tone unreasonable and its narrative flow, inexplicable.