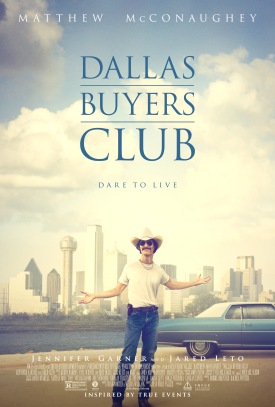 Those of us who’ve known Matthew McConaughey a while are familiar with his unappreciated acting talent, although the fact that his skills have gone unappreciated by most of the viewing public is no one’s fault but his. His credits list one generic, manufactured romantic-comedy (e.g. How to Lose a Guy in 10 Days [2003]) or bland action movie (e.g. Sahara [2005]) after another, clear examples of desperate attempts to achieve mainstream recognition and fame. While I can’t exactly blame the guy for trying to make a name for himself by promoting bad movies… hey, wait, of course I can! Actually, what I can’t fault the guy for is lacking competent acting ability. The first time I saw Reign of Fire (2002), I could tell this man could play a role if only he applied himself to the right project.

That’s exactly what McConaughey’s done here with Dallas Buyer’s Club. While far from an exemplary film, Dallas Buyer’s Club (DBC) demonstrates what its lead actor can do when put in the right movie and given a characterization to work with. The longtime heartthrob and working action star gives it his all as a drug addled Dallas rodeo cowboy who is quite the ladies’ man and, among other things, diagnosed with HIV that rapidly develops into AIDS. Over the course of his journey in the film, McConaughey’s Ronald Woodroof battles both his immune system sickness, the inherent corruption of the American Food and Drug Administration (FDA), and manages to overcome his homophobic prejudices. DBC can’t be shafted for skimping on the basics of protagonist character arcs or its lead actor’s performance.

Left: McConaughey is on a roll in Dallas Buyers Club. Jennifer Garner most certainly is not. Right: Finding friends in strange places.

DBC is further strengthened by an atypical performance by Jared Leto as a transgender drug addict who also suffers from AIDS. Leto provides a fine compliment to McConaughey’s more traditional role of a Southern conservative who grows to become less of an asshole. They have terrific chemistry.

Outside its two leads, the film is less consistent. While the film opens with a captivating prologue and demonstrates creative cinematography here and there, for the most part, the camerawork is uninspiring. Another problem is Jennifer Garner’s equally uninspired turn as McConaughey’s doctor and love interest. Every scene with her screams mediocrity and lacks any sort of passion at all. However, the biggest weakness of the film is how the narrative fails to build on its main character once Woodroof initiates the titular Dallas Buyer’s Club. The story hits its rhythmic peak after McConaughey decides to take charge of his treatment, starts his business, overcomes his homophobic feelings, and butts heads with the FDA. Nothing is added to the story or to further develop Woodruff’s character in its final act, which is indicative of the film’s overall poor pacing.. The last forty minutes or so are a narrative plateau.

The fact that DBC remains interesting despite all those missteps is impressive. The many socioeconomic and personal dilemmas its screenplay tackles with relative ease and dexterity are worth the price of admission alone, as are McConaughey’s and Leto’s performances. It’s unfortunate that both the film’s writing and direction are just OK, not great, but it’s hard to knock a film that’s so honest, straightforward, and has such a charismatic lead. And to that end, McConaughey will probably receive Academy attention for his first real success in a non-mass-produced Hollywood schlockfest… and I think that we should all encourage him 🙂

SUMMARY & RECOMMENDATION: Dallas Buyer’s Club is lead by the one-two punch of McConaughey as a rowdy modern cowboy and Leto as a sassy transgender drug addict. The film covers a lot of thematic ground in a short running time without descending into preachiness.

— However… the narrative doesn’t develop much after its second act, and its overall pacing is slow. Jennifer Garner continues to be terrible.

? Jesus, Matt, how much weight did you lose?

I love movies, music, video games, and big, scary creatures.
View all posts by The Celtic Predator »
« ‘Blue is the Warmest Color’ (2013): Three Hours of Close-Ups
‘Magnolia’ (1999): Paul Thomas Anderson at His Most Long-Winded »