Marry Harron’s American Psycho (AP) is one of the funniest movies ever made. To be fair, I’m not a huge “laugh-out-loud comedy” fan (films like The 40 Year-Old Virgin [2005] or Pineapple Express [2008] don’t do much for me), as I’ve found the comedy genre in film often doesn’t equate to actual humor unless you’re aiming for the lowest common denominator. Put another way, comedy does not necessarily equal “funny” in the movie business; it’s just a demographic, aimed at providing raunchy sexual innuendo and repetitive pop culture references for older Millennials and younger Generation X-ers, with more in common with late-night standup or improv than visual humor. 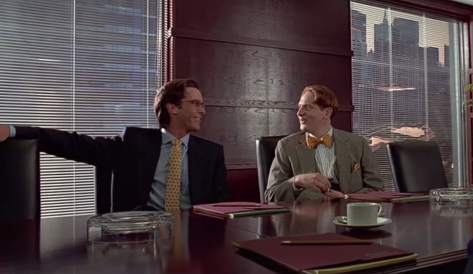 Bale’s Bateman simultaneously loves and hates the yuppie lifestyle. He seeks to maintain his status, physique, and fashion sense at any cost (literally), but he also despises his colleagues’, his fiance’s, and his own extreme shallowness at the expense of his sanity. As such, he tends to “act out.”

However, ruthless satires and warped, black comedy often leave me in stitches (e.g. Hot Fuzz [2007], The Big Lebowski [1998], Office Space [1999]), and in that department, I don’t believe there’s any better representative than American Psycho (AP). The film is a ferociously funny, dark, and intelligent picture that lampoons the material excesses and class snobbery of the 1980’s “yuppie” (Young Urban Professional) culture, and offers snarky commentary on male vanity. In short, AP is about status and how we are all, in some way as humans, obsessed by it; the highest lens of magnification centers on how males in positions of privilege and high-status rapidly become parodies of themselves, and the funniest aspect of AP is how it uses a wide range of cinematic exaggeration to make its point. In brief instances, the satire is layered on high with the utmost disdain for any kind of subtly (though it works brilliantly), and in most other parts of the movie, writer-director Marry Harron lets the story and characters speak for themselves.

The most famous part of AP is Christian Bale’s performance as Patrick Bateman, the titular “psycho” (an homage to Norman Bates, perhaps?). The man gives what is easily his greatest performance amongst a career of cinematic shape-shifting, diverse, chameleonic roles. Bale brings a distinctive cynical bitterness and charismatic humor to the character and to the film as a whole. With the power of Bale behind him, the character of Bateman is both likable and loathsome, comically playful and creepily violent, self-aware and self-deprecating while also mindlessly arrogant. He is both the perfect caricature of the 1980’s American yuppie and also its antithesis. Harron’s hilarious jokes, situations, and one-liner responses adapted from Bret Easton’s novel of the same name are some of the most memorable character moments in modern cinematic history.

To be fair, American Psycho was divisive when it was released — and remains so today among general audiences — for good reason. The film is gruesome in numerous scenes, and its occasional over-the-top black comedy may prove too much for viewers unaccustomed to social satire or dark humor in the vein of British comedies. In many ways AP has more in common with British humor than American, and that may be why it didn’t go over so well domestically.

Another thing that tends to rub people the wrong way is how ambiguous its story seems in many areas, but also how black-and-white, cut-and-dry definitive it feels in others. Arguably Harron’s greatest misstep is how she stages the final scene to unintentionally imply that the entire film, including Bateman’s unspeakable crimes, were some sort of dream or dark fantasy. While that is one interpretation, close examination of the rest of film section-by-section reveals rather incredulous inconsistencies and nonsensical character motives if that were true, and moreover negates much of the satirical symbolism of the entire movie. If you pay attention as the film progresses, there are clear clues laid out as to what the film’s commenting on, how it’s commenting on it, what’s real, and what’s most likely not.

Try getting a reservation at Dorsia now, you fucking stupid bastard.

AP is one of those movies that has the best of both worlds: It’s entertaining and intelligent. It’s good looking while also managing to keep a stirring conversation throughout its running-time. In my opinion, Harron’s Psycho is one of the best film comedies ever made, executing its humor with endless personality, perfectly placed (even restrained) violence, and unforgettable quirkiness. Despite its inconsistencies, there are few films more memorable than American Psycho, and for good reason: It is a comedy that manages to be both funny and cinematic, but in the most intelligent, highbrow, and disturbing way possible. Besides, who hasn’t wanted to bury a fire-ax into their coworker’s skull from time to time?

SUMMARY & RECOMMENDATION: While Bale is the best known part of American Psycho because he’s the one in front of the camera, it’s Mary Harron’s work behind it as both a director and screenwriter that makes the film flow. She takes the best elements from Easton’s controversial novel, boils them down to their essence, and makes striking commentary on a social class gone crazy the world over. Speaking of Bale, he’s genius here as Bateman in his best (and funniest!) performance ever.

— However… the ending is self-contradictory in comparison to the rest of the film. The sheer, shallow inhumanity of the entire cast can wear on the less sardonic viewer.

I love movies, music, video games, and big, scary creatures.
View all posts by The Celtic Predator »
« A Look Back at the Marvel Cinematic Universe, Final Parts and Conclusion: From Many, One
‘Goliyon Ki Raasleela: Ram-Leela’ (2013): Sanjay Bhansali Goes Nuts »