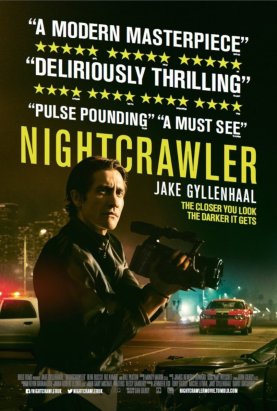 After hearing all the rave reviews for this movie and especially its star’s unnerving lead performance, I regretted missing Nightcrawler in theatres. It sounded right up my alley in hindsight: A dark, creepy, neo-noir-type thriller surrounding the nightly escapades of a sociopathic freelance journalist. Thankfully, second-run college movie theatres exist for a reason, so last week I finally caught Jake Gyllenhaal doing his creepy thing in arguably his finest performance of his career. For better and worse, it was exactly what I expected it to be.

Fans of film noir, neo-noirs, or any and all crime films set in or around the Los Angeles area will have a feast with this. Visually speaking, Nightcrawler is one of the best-looking films of the year and certainly one of the creepiest, right up their with The Mo Brothers’ Killers (2014), though thankfully not quite as goretastically bloody. The movie lives and breathes by its creepy nighttime visuals and disturbing crime scenes, as well as some equally disturbing journalistic practices by Gyllenhaal and his cable news director associate, Rene Russo.

Speaking of Gyllenhaal, he truly is as good as all the critics and fans have been saying. His physical commitment to the role is impressive (he lost about 20 lbs.), but his portrayal of a terrifying and ambitious sociopath is a true sight to behold and is the star of the show. While Gyllenhaal’s character himself commits few direct violent crimes on screen, his skulking, almost Gollum-like presence lurking throughout every shadowy frame of the film is incredibly unsettling in the scariest way possible.

This is a good summary of the whole film: Jake Gyllenhaal’s Lou Bloom is a slinking, skulking, morally compromised goldmine for American media.

Nightcrawler’s supporting cast is also impressive. The aforementioned Russo premieres as the most emotionally vapid, shallow newswoman since Faye Dunaway in Network (1976), Riz Ahmed costars as a southern California lowlife Gyllenhaal swindles into working for him, and even Bill Paxton shows up as a veteran “nightcrawler” journalist (freelance journalists who skulk in the darkness to reach news stories that ordinary news-vans can’t get to).

My only complaints with the film have to do with the script and, surprisingly, the music. It’s not that Nightcrawler is poorly written (on the contrary, it’s quite an intelligent story), but the pacing isn’t the greatest and a narrative this straightforward probably could’ve been told in as little as 90 minutes instead of being stretched to almost two hours. The first half hour is particularly slow, and the film doesn’t truly gain steam until Gyllenhaal’s protagonist finally learns the ropes of the nightcrawler business. Independent of the screenplay, James Newton Howard’s soundtrack doesn’t work well with the movie’s creepy tone.

That being said, Nightcrawler is a fine nighttime crime thriller that’s sure to be one of the most enjoyable midnight rentals for both Gyllenhaal and noir-fans alike. It’s not too spectacular to recommend to all moviegoers like many of the overblown comparisons to Taxi Driver (1976) have advocated, but its alluring cinematography and great cast make for a consistent, solid midnight stroll through America’s seediest news footage.

SUMMARY & RECOMMENDATION: Jake Gyllenhaal is on fire here as American cinema’s newest and creepiest sociopath, Lou Bloom. He’s not quite as charismatic and memorable as Christian Bale’s Patrick Bateman, but he’s up there. I’m finally a Gyllanhaal-believer 😀 Dan Gilroy’s visual composition of Nightcrawler’s neo-noir aesthetic is admirable, as are the performances by the supporting cast. Ahmed does a killer accent.

— However… Nightcrawler takes a while to warm up to speed. Parts of the soundtrack don’t quite mesh with the movie’s dark tone.

? I came in expecting Juggernaut, I got Rene Russo.