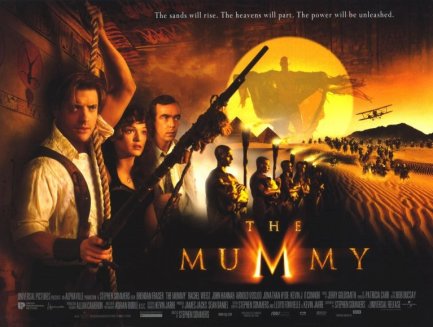 The late 1990s and early 2000s remain a controversial period in filmmaking special FX, specifically with regard to digital FX or computer generated imagery (CGI). The first prominent usage of CGI in a major motion picture, to my knowledge, was the alien water tentacle in James Cameron’s Abyss (1989); this was later followed by the shape-shifting T-1000 (Robert Patrick) in Cameron’s Terminator II: Judgement Day (1991) before the revolutionary explosion of Jurassic Park (1993). Hollywood became rapidly more complicated after that…

By the turn of the millennium, CGI was no longer a new tool and the modern wave of digital filmmaking, including everything from feature-length computer animated films to live-action digital FX extravaganzas, was about to begin with Peter Jackson’s Lord of the Rings (LOTR, 2001-2003). Those fantasy epics were a watershed moment in filmmaking, much like Jurassic Park or Terminator II, and remain the benchmark for high-concept digital FX in a Hollywood blockbuster. Numerous FX-heavy blockbusters released around the same time period, such as Hulk or Daredevil (both 2003) are notorious for their overzealous use (or perhaps misuse) of CGI, which predated the Star Wars prequels (1999, 2002, 2005)-inspired mainstream backlash against prolific blue-screen technology and practical FX nostalgia. 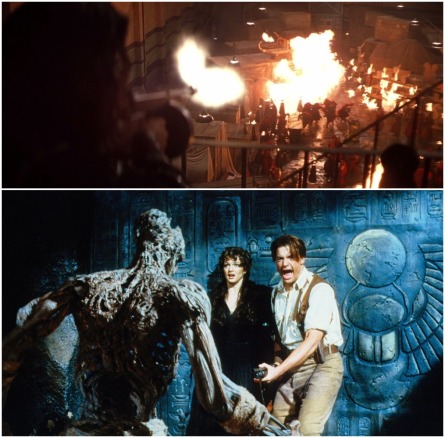 Top: Oded Fehr provides cover fire for Rachel Weisz and Brendan Fraser, who blast away Anubis cultists in a rousing escape scene in The Mummy Returns. Bottom: Weisz and Fraser meet the titular mummy for the first time.

One of the few high-profile, non-LOTR franchises to survive the early proliferation of digital FX and stand the test of time is Stephen Sommers’ Mummy. A re-imagining of the classic original 1932 horror film of the same name, both The Mummy (1999) and The Mummy Returns (2001) are forerunners of modern franchise reinventions like Christopher Nolan’s Dark Knight Trilogy (2005, 2008, 2012) and The Planet of the Apes (2011, 2014, 2017). Tonally, franchise remakes such as these share little to nothing with their original namesakes besides a loose premise and the obvious brand name.

While the first sequel, The Mummy Returns (henceforth, TMR) deserves criticisms for some laughable CGI that didn’t stand up to scrutiny even upon release, both it and its 1999 predecessor, in general, utilize primitive digital FX quite well. Each film is built atop a strong foundation of likable characters, charismatic performances, a well paced story, and interesting mythology. To that end, the majority of both films’ action sequences and set-pieces are dominated by close-quarters-combat (CQC) and intense, practical-FX based shootouts.

Adding to this effective, dynamic action cinematography is the series’ alluring Old World mythology and adventure serial aesthetic. While it probably isn’t fair to classify The Mummy and TMR as Indiana Jones (1981, 1984, 1989) riffs, given how the latter was itself a throwback to pulp tomb raider narratives of the 1920s, 30s, and 40s, The Mummy franchise is perhaps the lone spiritual successor to Indiana Jones that executes that quasi-fantastical adventure serial tone. The Mummy’s ancient Egyptian mythological world building is a large part of the movies’ charm, and contrasts well with the modern, cocksure, swashbuckling archetypes brought to life by Brendan Fraser, Rachel Weisz, John Hannah, and Oded Fehr. The physical sets are extravagant and convincing, while unforgettable location-photography from Morocco to Portugal to even London suck both characters and audience into this memorable adventure.

With all that in mind, perhaps the most endearing aspects of both films are their human (and superhuman) characters. The aforementioned Fraser and Weisz as the charismatic gunslinger and academic tomb raider, respectively, embrace their witty, blockbuster dialogue and boast tremendous chemistry with each other and their supporting cast. You can tell castmembers had a blast filmming these movies given the fluidity of their one-liners, sarcastic retorts, and deadpan humor, much of which juxtaposes brilliantly with the films’ horror and action elements.

In contrast with certain modern blockbuster franchises, The Mummy’s humor feels natural and associated with personality archetypes rather than abrupt, forced subversions of otherwise serious, dramatic moments. Neither The Mummy nor TMR undercut an emotional plot-point for a cheap joke or random quip, which is a significant reason why their stories maintain tension without sacrificing levity.

The action sequences themselves have stood the test of time thanks to their editing, musical score, and versatility. Both films utilize extensive sequences involving everything from fisticuffs to bladed weapons to firearm shootouts to vehicular chases. Digital FX, particularly in the 1999 film, are used to embellish or elaborate these grounded set-pieces, save for a few notable exceptions like the sandstorm sequence featured in the original film’s marketing. Stephen Sommers demonstrates fluid parallel editing across both films, cutting back and forth between multiple characters in sometimes multiple locations for added, rather than diminished effect. The ensemble nature of these fight scenes compliment the cast’s amusing banter and coalesce with the rousing score, penned by Jerry Goldsmith in The Mummy and Alan Silvestri in TMR.

The few parts of these films that aren’t fun are those special FX that either imply creativity overload or were simply ahead of their time. An example of the latter are the mummified CGI priests in the 1999 finale, where it is clear Brendan Fraser is swinging his sword at air rather than stunt doubles in motion-capture gear; an example of the former is the now infamous CGI Dwayne Johnson-Scorpion King monster that bookends the 2001 film. The laughable “big baddie” turns the otherwise tense climax of TMR into a comedy whenever the camera shifts to a closeup of The Rock’s cartoonish face, and is unacceptable in a big-budget feature. They should’ve choreographed another fight sequence with Johnson (the actor) instead of using FX that wouldn’t hold up in a Playstation 3 videogame. 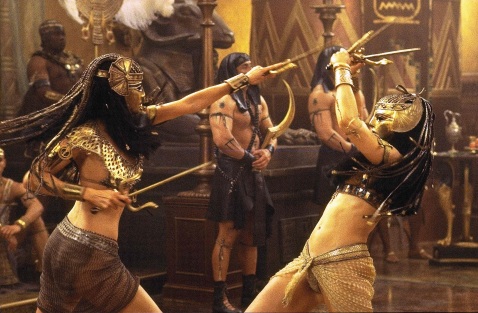 Patricia Velasquez (left) strikes at Weisz (right) in a flashback of their past lives in ancient Egypt. It’s a long story.

In many ways, their prominent use and occasional misuse of CGI notwithstanding, The Mummy and The Mummy Returns have more in common with action and adventure films from the 1980s and 1990s than with modern blockbusters of the 2000s and 2010s. Modern action films have started trending back toward blood squibs, adult-oriented violence, and practical FX, but the sort of casual, carefree adventure laced with Old World mysticism and mythology remains a thing of cinema’s past. Perhaps the turn-of-the-millennium Mummy films are most remembered for their intersection of two distinct styles of mainstream blockbuster filmmaking, and will remain so, with their digital FX at the forefront of that. As fun crowd-pleasers in their own right, though, Stephen Summers’ Mummy duology still holds up after all these years, thanks to a combination of classical elements like a great cast, organic humor, dynamic action, a memorable soundtrack, and a fantastical setting.

SUMMARY & RECOMMENDATION: Fun and adventure are in the DNA of The Mummy and its sequel’s screenplay, and Stephen Sommers brings these elements to life with solid direction, impressive production values, and a wonderful cast. There’s little here that’s innovative, but The Mummy’s modus operandi and overwhelming mythology are classical storytelling tropes and enduring character archetypes.

— However… more than a few digital FX overstep their limitations, none more so than the horrible Scorpion King monster at the end of Returns.

? Does anybody else find the series’ ending ironic, how Imhotep’s (Arnold Vosloo) greatest lust and entire motivation for coming back from the dead, abandons him?