Much like Paul W. S. Anderson’s Alien vs Predator (2004) and David Fincher’s Alien 3 (1992), Stephen Hopkins’ sequel to the 1987 muscle-bound commando classic is a film that has risen substantially in my eyes in recent months. I now view the film as a misunderstood project, undeserving of the negative rap it has received over the years. While it’s hard to compare this outing to the original, I vastly prefer Hopkins’ envisioning of a Predator sequel to Robert Rodriguez’s more recent attempt, Predators (2010), and that’s mainly because the writing for this film is done by John and Jim Thomas, the screenwriters of the original 1987-movie.

As far as adding to and expanding upon the source material, Predator 2 does more than most sequels to make a unique, novel experience out of its adventure, at least with regard to its setting and premise. The Brothers’ Thomas decision to abandon the isolated jungle setting of Central America used by the first film and instead opt for the urban jungle of then future-1997 Los Angeles was probably the right idea. While the choice feels odd at first with no sense of isolation for the central characters and constant exposure to the hustle and bustle of an urban metropolis, the Thomas brothers do a good job of getting the most of the city environments and making the characters feel cut off from the rest of society during the action sequences. It’s also interesting to see the Predator hunt in a different environment.

Left: Danny Glover takes over the helm for Arnold Schwarzenegger in the sequel. He’s got a ton on his plate right from the movie’s opening. Right: The haunting music and eerie atmosphere make the buildup to the trophy case-reveal intense.

The film is also an interesting sci-fi-thriller inversion of a cop drama or crime film, much in the same way that the first Predator was a sci-fi-thriller subversion of an action film. All the basic elements of a buddy cop-movie are in place, from the renegade, loose-cannon protagonist who never follows the rules (a competent Danny Glover), to the police chief who’s sick and tired of reigning in said loose cannon (Robert Davi), to the cocky rookie officer who’s way out of his league (Bill Paxton). The film follows the exact routine of a cop drama like a Lethal Weapon (1987, also starring Glover) or a Dirty Harry (1971), minus a few brief point-of-view shots from the Predator’s heat-vision. It keeps with the trend of the first film in disguising its true genre-blend identity until later in the film, but the guise still feels refreshing because it’s taking place in a different setting.

The only problem with this approach is that there’s not much tension or suspense with the reveal of the Predator (which comes far too early in the film to have much of an impact anyway). This is where the sequel does make the same mistake that most sequels do in adhering too closely to the original formula for a fraction of the payoff. The audience already knows what to expect. A large part of the film’s central conflict and Glover’s drive is to discover the identity of this “new player in town” who keeps slaughtering members of both warring gangs, and then later the police. Yet, like I said, there’s hardly any suspense here because we already know whom it is and what’s going on!

That being said, the Thomas brothers deserve credit for writing a main character that once again has personality and charisma. Danny Glover’s Mike Harrigan, LAPD police officer, is likable and far more interesting than any of cardboad cutouts we were presented with in Predators. Equal amounts of praise should go to Glover, whose trademark career personas of either a cop (the Lethal Weapon series) or an angry crazy-person (Angels in the Outfiled [1994]) mold together well. I’m glad he took the role seriously.

The same praise can’t be said for the rest of the cast, although I think that’s largely due to the actors’ overracting rather than Jim and John’s writing. Both members of Glover’s squad, Maria Conchita Alonso and Bill Paxton, can’t seem to handle their ordinary lines and give awkward performances. Paxton’s distractingly annoying presence as the intended comic relief is surprising given his famous performance in Aliens (1986). The rest of the supporting characters are either annoying or uninteresting as well. Every member of the two clashing gangster tribes is an R-rated cartoon character. Both the over-coked, Scarface (1983)-ripoff/Colombian drug cartel enforcers, featuring El Scorpio (Henry Kingi), and their “Jamaican Voodoo Posse” reefer-smoking opponents, featuring King Willie (Calvin Lockhart), are too much to take seriously. Gary Busey is alright as the special government agent sent to secretly capture the Predator, but he’s not given much to do in the script. 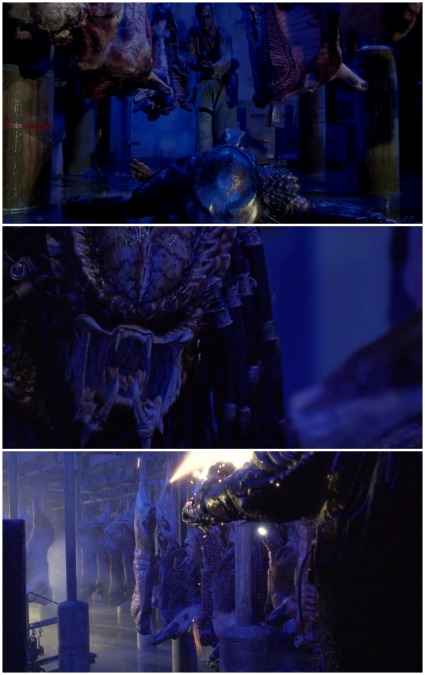 Some great shots from the most memorable, terrifying sequence in the film; note the expert use of atmospheric lighting.

With all that said, Predator 2 has much going for it. Some set-pieces are incredibly well done, such as the subway massacre and the duel inside a remote slaughterhouse. Moments like watching Alonso walk slowly to the back of a subway car, gun in hand, while the dead silence of a darkened tunnel echo all around her, and an alien menace stalks her from out of site, are genuinely intense moments.

The set-piece inside the aforementioned slaughterhouse about two thirds through the story is the highlight of the film, and a masterwork of suspense. The creative use of lighting and blocking are particularly commendable and make for a vintage Predator-experience. The scenes following the slaughterhouse sequence continue to build suspense and offer several fun surprises and false-endings along the way. If the rest of movie were as intense and well orchestrated as its final act, Predator 2 would be a fantastic movie.

Other commendable aspects of the movie are its considerable expansions to the Predator lore, which include several new weapons, some retooling of the Predator helmet and armor, and the (spoiler) revelation that the Predators are a clan-based society that have been hunting humans on earth for hundreds, if not thousands of years. Predator 2 also cannonized the idea of Predators hunting many different species of prey, showcased in a cool trophy case that included (what else?) a xenomorph skull, and made an obvious nod to the graphic novel-mashup released a year earlier.

Predator 2 is a prototypical sequel in many ways, but is also quite original in just as many aspects. It’s far from a poor film, although it’s sometimes painful to think how a few adjustments could have made it so much better. All in all, I wouldn’t heartily recommend this film to moviegoers who aren’t fans of the franchise or the original, but if you are in any way attached to the Predator mythology and 20th Century Fox’s creature lore, it’d be unfortunate to pass up. Despite its unevenness and comparisons to the classic original, Predator 2 is a violent, memorable, and worthy sequel.

SUMMARY & RECOMMENDATION: Predator 2 is a sequel that tries, tries, and tries some more — and more often than not, succeeds at being a good sequel to a great movie. The final act is mightily impressive, leaving you to wonder how good the movie could have been if the rest of the film had been of that same caliber. The low-key blue lighting, intense build up, and bloody carnage inside the slaughterhouse is as white-knuckle as anything in the first movie. The expansions to the Predator mythology are creative, sensible, and welcome. Danny Glover is a fine protagonist who’s more than capable of going toe to toe with the titular baddie.

— However… the rest of the cast leave much to be desired. Way too many characters are either uninteresting or comical caricatures. The detective work by Glover and company to uncover the identity of the Predator isn’t suspenseful given how the audience already knows what’s going on, and the anticipation of the characters catching up isn’t filmed in a way that keeps us excited.

—> RECOMMENDED, but keep in mind this film is built more for Predator or science-fiction fans than the general populace. Its core is solid enough for broad genre appeal, but its details are enough to turn off those unenthusiastic about explicit sci-fi violence or world-building minutiae.

? Glover, seriously, if you are ever in any doubt, just shoot the motherfucker in the face and keep shooting until you know he’s dead.