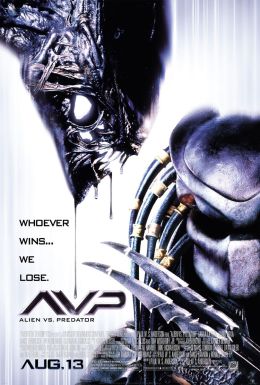 Paul W. S. Anderson’s controversial crossover flick between the famous Alien and Predator franchises is a project that has long held my attention for reasons both good and bad; I have referenced it many times on this site, with most of those allusions being negative. However, some of my opinions of several of the Alien-Predator (AP) sequels, including Anderson’s Alien vs Predator (AVP), have changed since I first started this blog, and I feel these latest opinions will remain concrete given my maturation as an amateur film-analyst over the past year or so. I believe I was too harsh and elitist in many of my judgments regarding some of the more “looked down upon” AP-titles released after the “original three” Alien (1979), Aliens (1986), and Predator (1987) — specifically Stephen Hopkins’ Predator 2 (1990), David Fincher’s Alien 3 (1992), and Anderson’s AVP.

Paul Sounds-like-a-much-better-director’s-name Anderson is not one of my favorite filmmakers. However, with regards to his much discussed and widely disparaged crossover picture, I feel that both critics and fans alike have been too harsh and, quite frankly, missed the point of the film. I believe that his work on AVP deserves some credit. What I’m saying is that I kinda like AVP. Here’s why:

Blades, guts, and glory: Hunters teach the hunted, but the ultimate prey won’t go down without a fight.

Many of the artistic-design choices and the production values of the film are quite good. I believe the inspirations taken from the original 1989 comic book (edited and illustrated by Chris Warner), such as the use of Aliens by the Predators for sport hunting, and the original ideas inserted by Anderson, such as the pyramid-setting, are creative and expand upon the source material — far more so than anything in either Alien Resurrection (1997) or the much better received Predators (2010).

I don’t understand fan’s obsessive hatred for these ideas, or why so many aspects of the film’s setting were so poorly received. The implementation of the pyramid and the alien-hunting “rites of passage” for adolescent predators make sense; I think their execution in the story was well done. Setting the narrative on isolated Bouvetyoa Island is smart and keeps with series’ tradition; it does nothing to contradict continuity of the later films, it maintains tension in the narrative, and the set-designs of the pyramid are of high quality and are visually interesting.

I also approve of the Predator and Alien designs. To me, the aliens look much improved from their goofy, bullet-dodging counterparts in Resurrection, and are the best presentations of the xenomorph on film since 1986. The expansions in the Predator arms and armor are slick and more extensive than the additions in Rodriguez’s Predators. Further shoutouts go to the filmmakers’ use of practical FX, including miniatures, animatronics, and creature suits, as well as their minimal, effective use of CGI.

The action scenes are well done despite the inevitable campy premise of having two monsters fight each other. Anderson’s use of slow-motion and the exciting score, combined with varying amounts of practical and computer FX, make this clash of monsters visceral and forceful.

If fans and critics should be complaining about anything in Anderson’s crossover beast-match, it’s the characterizations and, to a lesser extent, the dialogue. Where AVP struggles and where I think harsh criticism is justified is in the cardboard characters the screenplay touts about as the people we’re supposed care about in this sci-fi adventure. Compared to the casts in Aliens, Predator, and even Alien, AVP comes up way short. There is no likable, everyman Hicks, no wise-cracking Hudson, no tough-as-nails tomboy Vasquez, and no charismatic commandos a la Predator’s gang of heroes. Even Scott’s picture, which stuck to slasher conventions established by Psycho (1960) of vanilla characters with no defined protagonist, outreaches AVP in terms of memorable personalities. AVP’s saving grace in this department is that its cast, particularly lead Sanaa Lathan and Lance Henrikson (yes, that one), have enough acting chops to slog through the mediocre to bad dialogue and make the conversational parts watchable.

Two famous science-fiction franchises awkwardly collide. The Predators come well armed and with bad intentions, but so do the Aliens.

In my opinion, the characterizations and dialogue in Rodriguez’s masturbatory fanboy project are as poor as in Anderson’s creation, and we still have the comical sumo-wrestling of famous sci-fi monsters (remember the Predator vs Predator matchup near the end?), but AVP wins by a landslide in terms of action filmmaking. I fail to understand the rabid praise of a film that tries so little and plays it so safe versus the incessant flogging of a film that at least tries (and succeeds more, if you ask me) to do something different. There is more successful creativity in Alien vs Predator than there ever was in Predators, and so many of the things fans found offensive in AVP, such as puny humans defeating far superior alien baddies (e.g. The comical thrust-parry samurai fight; Adrien “Big Nose” Brody beating up a Super Predator), dumb lines, and dumb characters are present in both films. And yet Predators is somehow the much awaited “redeemer” of the franchise.

I still don’t like Paul W. S. Anderson as a director and don’t approve of the overwhelming majority of his filmography, yet that doesn’t mean the guy can’t make a decent film once in a while. I think AVP is one of those films. I understand why many people don’t love it, yet I still to this day fail to comprehend why legions of fans loathe it

SUMMARY & RECOMMENDATION: Alien vs Predator looks good and sounds good, thanks to a plethora of digital and practical FX and high production values. The action is more than competent, and the story is paced well.

—> However… the film struggles with its characterizations and dialogue. Sanaa Lathan is a decent heroine, but she’s not given much to work with, as is her supporting cast. The PG-13 rating is a head-scratcher .

—> ON THE FENCE: This one’s a guilty pleasure for me, I’ll admit. Few people outside the Alien-Predator fanbase will be able to take it seriously, and most AP diehards will dismiss it as offensive. That being said, I still don’t feel too guilty about enjoying it.