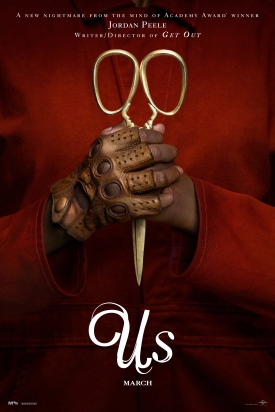 If you asked most cinephiles or film critics, let alone general audiences, whether Jordan Peele would prove himself one of the hottest, most transgressive genre filmmakers on the planet five years ago, most if not all of them would believe you were smoking something. His lucrative, critically acclaimed, and yes, Oscar-winning debut feature, the sociopolitical genre-satire, Get Out (2017), proved that if anybody was under the influence of substances, it was those who doubted the versatility of career comedians.

In most people’s defense, under-qualified actors, writers, or producers aspiring — and failing — to be auteur filmmakers are a dime a dozen (see David S. Goyer, Mark Steven Johnson, Joseph Gordon-Levitt, James Franco), with cases like Ben Affleck or Clint Eastwood being the exception, not the rule. Peele’s drastic stylistic shift from a standup comedian and situational comedy TV-writer to a provocateur of brutal, violent horror is noteworthy, however, even before considering the quality execution of his feature-length work. Consider the recent work of his longtime colleague, Keegan-Michael Key, whose most noteworthy deviation from his comedic roots thus far was a supporting role in The Predator (2018). I would qualify that as an example of career risk-taking
“regressing to the mean,” if you will. 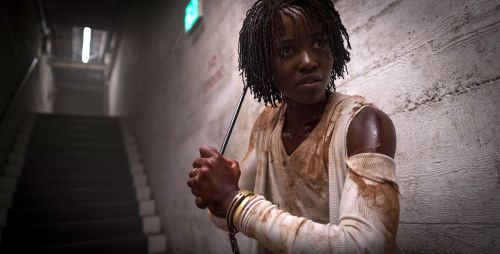 One of my favorite plot devices involves characters physically climbing to either elevated spaces to reach their destiny (e.g. Baahubali [2015, 2017]) or descending to underground spaces to face their worst nightmares (e.g. The Void [2016], The Descent [2005], Aliens [1986]). Lupita Nyong’o must face hers in Us.

Peele’s sophomore followup to the racial commentary of Get Out feels both more focused on broader sociopolotical themes (e.g. socioeconomic class relations instead of racial conflict), as well as more dedicated to a purebred horror experience. My affections for the visual prowess of Get Out notwithstanding, some of my reservations about the film had to do with (1) its indecisive tone and (2) inconsistent execution of a batshit premise. The latter was ballsy yet ridiculous, even by Twilight Zone (1959-1964) standards, featuring WASPy suburbanites literally transplanting their brains into kidnapped African-Americans. The former concerned an unnecessary comedic supporting role from Lil Rel Howery, not to mention a relatively understated dramatic first half juxtaposed with breakout star Daniel Kaluuya curb stomping his oppressors and impaling them with deer antlers in the second half. Literally.

If anything, Us illustrates how Peele’s direction and screenwriting continue to grow after his successful debut, all while still embracing Twilight Zone or Black Mirror (2011-present)-level weirdness and social commentary. Us is a scarier, meaner, more surrealist adventure than Get Out, utilizing a premise just as bizarre yet better executed. The result is a memorable, almost science-fiction hybrid about class warfare, cultural guilt, and not-so-family-friendly violence.

Us is spearheaded by a bravado performance from Lupita Nyong’o, whose empathy, aggression, and desperation are critical to relating to her character’s impressive arc. Her chemistry with costars Winston Duke, Shahadi Wright Joseph, and Evan Alex feels natural, providing an emotional foundation for this nuclear family that feels relatable, personal, and thematically resonant with Us‘ overarching story.

Peele’s visual direction, in addition to his acting-direction, is even stronger than in Get Out, which is the least surprising aspect of this film. He utilizes extended, patient zooms in conjunction with a haunting soundtrack to emphasize tension and foreboding. His overall camerawork is refreshing in its patience and lack of unnecessary movement, emphasizing framing composure and deliberate editing rather than rapid pans, quick cuts, or my least favorite overused cinematographic technique, handheld dialogue photography. Despite how violent most of the film’s sequences are, Peele’s direction is restrained, composed, and relies most on ominous lighting setups and blocking to build suspense; the casual, controlled style in which the movie’s blood and gore is filmed adds to the story’s morbid tone, in a way.

As for the story itself, it’s both ambitious and a tad sloppy. Peele’s affection for exaggerated, almost surrealist premises in the vein of Twilight Zone or Black Mirror sets his stories apart from all but the weirdest of contemporary mainstream horror (Don’t Breathe [2016] is one of the few comparisons to come to mind); he puts the generic cookie-cutter possession narratives of The Conjuring (2014, 2016, 2020), Annabelle (2014, 2017, 2019), The Nun (2018) et al. to shame on sheer creativity alone. To say the film’s bizarre plot devices don’t conflict with the film’s serious characters and heartfelt social commentary would be somewhat dishonest, but Peele’s acting direction and director of photography, Mike Gioulakis, execute them about as well as a filmmaker could. Literal interpretations of the story’s premise or plot development are inappropriate, though broader, metaphorical interpretations of the the film’s doppelganger antagonists lend depth to its conclusion. Still, one could argue Peele either goes too far or not far enough in explaining the backstory of his film’s conflict. 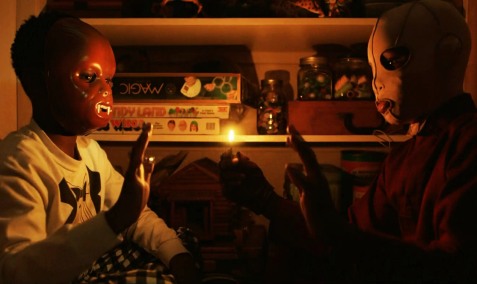 The principle castmembers of Us don’t just face their doppelgangers, but their “tethered” opposites.

In the end, Us is strong evidence Jordan Peele’s well received debut feature was anything but a fluke, and that the man’s dedication to the horror genre is here to stay. His work rises above the commonplace Exorcist (1973) derivatives favored by most Hollywood studios while avoiding the dull atmospherics of many independent filmmakers (e.g. Ti West). Though his creative premises stretch past credulity into the absurd, his directorial command of horror fundamentals and storytelling execution make his outlandish narratives worth revisiting. Us promises nothing but good things for the future of Jordan Peele’s horror filmography.

SUMMARY & RECOMMENDATION: Built atop identifiable cinematography that builds incredible tension, Us makes the best use of its wild story, great cast, and thematic substance. Its social commentary is broader yet more interesting than Get Out‘s, finishing with a strong conclusion that emphasizes its haunting, surrealist mood.

— However… Us boasts a quasi science-fiction premise that is less specific than Get Out yet twice as ridiculous. If not for Jordan Peele’s assured handling of tone and likable characters, the story of Us would be a train wreck in the hands of most other filmmakers.

? They are turned back to the iniquities of their forefathers, which refused to hear my words; and they went after other gods to serve them: the house of Israel and the house of Judah have broken my covenant, which I made with their fathers. — Jeremiah 11:10 (King James Bible)