‘The Jungle Book’ (2016): A Generic Adaptation of a Generic Story

I’ve spoken before on the broad appeal of animated films, which I frankly don’t understand, from generic “fun-for-the-whole-family” affairs like Disney’s Frozen (2013) to little kid nonsense like Minions (2015). Most of these films don’t engage me in the slightest. While yes, many of them are more cinematic and competent in visual humor compared to most “adult-oriented” (I use that term broadly) comedies starring the likes of Seth Rogan, Amy Schumer, or Kevin Hart, they’ve become so overblown, oversaturated, and overrated to the point where I question whether anyone bothers to think about these films while watching them. I’ve concluded that most folks sit down expecting loud noises, flashy colors, and a means of occupying their children for two hours. Nothing more.

That brings us to our latest overblown, generic animated film, Jon Favreau’s The Jungle Book, a loose adaptation/conglomeration of Rudyard Kipling’s original short stories and the 1967 animated Disney film of the same name. While there are several notable things I enjoyed in this movie, namely its stunning animation, reasonable length, and Bill Murray’s charming performance, I don’t get its overwhelming, massive world-wide appeal. This film has a 95% “Fresh” rating on Rottentomatoes.com and has grossed $865 million! We’re talking Marvel Cinematic Universe-numbers here.

Welcome to the luscious visuals and wonderful weather of The Jungle Book.

For my part, this films plays less like a feature-length movie, less like a cohesive, singular narrative, and more as series of scenes loosely connected by a bad child-actor named Neel Sethi. The original Jungle Book “novel” was not actually a cohesive story, interestingly enough, but rather a collection of short stories starring a wide cast of overlapping ensemble characters; so, in a way, this makes sense, but it comes at the expense of telling a coherent feature-length story.

The Jungle Book begins by introducing Sethi’s character, an Indian human orphan named Mowgli, who is adopted by a pack of wolves and further guarded by a melanistic leopard named Bagheera (Ben Kingsley). Soon enough, our antagonist, Shere Khan (Idris Elba), a large Bengal tiger with a rather bad disposition, sniffs out Mowgli’s presence and demands his wolf pack give him up. Thus begins Mowgil’s hackneyed, meandering journey back to human civilization, until he changes his mind and goes back to get revenge on Shere Khan for killing his wolf pack’s leader. Also, there’s a running theme about Mowgli using tools or “tricks” or human problem-solving, or whatever, to forage for food and traverse the jungle, which at first he’s not allowed to use, but then later he is because he embraces being a man (or man-cub?) instead of a wolf, but he doesn’t join the man-village because he doesn’t want to, and then fights Shere Khan with his tricks because he can, and then also there’s something about using fire, but it’s called “the red flower” for some reason, but using fire is bad, but King Louie also wants it…

… you get the picture.

My main problem with this film is that I have no fucking clue what it’s supposed to be about. I assume it has something to do with Mowgli embracing his human tool-making/”tricks”/problem-solving and standing up to Shere Khan, but then I’m not sure what the whole point of the man-village and “red flower”-subplots were. I liked the parts with Bill Murray as Baloo and Christopher Walken as King Louie, because they’re fun standalone set-pieces, but they don’t have much to do with the overarching conflict between the wolves and Shere Khan, nor anything to do with the red flower or Khan’s fear of fire, or Mowgli’s trip to the humans. He just runs into them because he needs to.

Now I understand this film is not meant to be a Dickensian-epic, and it has an inherently silly, if not fantastical premise, but The Jungle Book’s clumsy adaptation of a series of separate short stories just doesn’t work well for a feature film. Its special FX are impressive, and its numerous voice-performances are commendable, particularly the aforementioned Walken, Murray, and Idris Elba as the villainous Khan. However, given how people tore movies like Dawn of Justice (2016) to pieces for its numerous plot holes and inconsistent editing (or so I thought) — despite that film’s terrific special FX, action sequences, and solid performances — I don’t see why this film gets an pass.

The tipping point for me is its main character, played by Neel Sethi, who I found to be a monotone bore. I didn’t care about his character, he had zero personality, and he recited lines like a robot throughout the entire movie. None of the other characters are fleshed out either, save for perhaps Baloo and King Louie, who feel like they belong in a different movie. I struggle to remember the rest of the cast, who I assume included Lupita Nyong’o, Giancarlo Esposito, Garry Shandling, and Scarlett Johansson, because their names are on the poster. 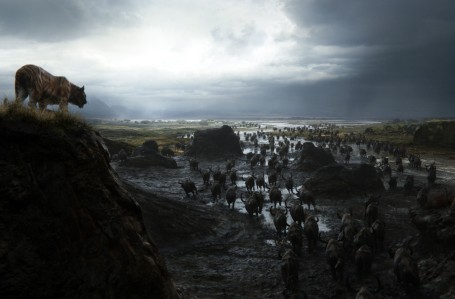 Shere Khan surveys the land in vain for his human prey.

I’m sorry, kids, I couldn’t feel the jungle-love for this one, as pretty as it looked and as much affection I have for its old-school songs. The filmmakers seemed like they couldn’t decide between adapting their own story in the spirit of the 1967 animated musical, or staying true to the original source material. By the end of it all, I wasn’t invested in Mowgli’s battle with Shere Khan, because I wasn’t convinced by Sethi’s acting and half the film didn’t concern Khan at all. This is just a collection of scenes that are fun enough in their own right, but strung together, they make little sense and even less of an engaging story.

SUMMARY & RECOMMENDATION: The Jungle Book will easily kill almost two hours of your time and shut your kids up with its impressive visuals, likable supporting characters, and an intimidating villain, but the fun will drain instantly if you stop and really think about it. Sethi is another miscast, unconvincing child-actor, and the film can’t decide whether it wants to be a musical or not. That’s about it.

? Speaking of those Westernized Indian films (or Indianized Western films… ?), why not hire those child actors?