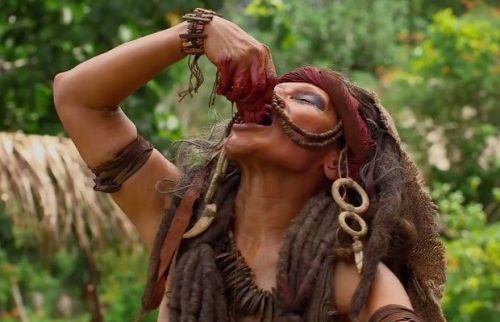 Before we go on, let us pause for a moment to consider two things: (1) Cannibal Holocaust predates The Blair Witch Project (1999) by nearly two decades, despite the fact that The Blair Witch Project is widely credited for “inventing” the insufferable found-footage concept as opposed to popularizing it, and (2) cannibal exploitation films are actually a thing.

Anyway, despite my longstanding aversion to torture-porn in the vein of the Saw franchise (2004-2009) and much of Roth’s own filmography, this film’s production has long circled the outer-rim of my attention due to its hilariously dark subject matter, its Amazonian setting, and of course its long-shelved distribution. The movie was written and produced in late 2012 and debuted at the Toronto International Film Festival in the summer of 2013. Originally intended for a September 2014 theatrical release, financial problems with the film’s production company left the film in limbo until it was picked up by another distributor. After all these problems and a whirlwind of a distribution tour, The Green Inferno finally released Stateside on September 25th, nationwide no less.

No one in their right mind can overlook Roth’s overdependence on shock-tactics and hamfisted dialogue, but to his credit he has crafted a genuinely effective, intense thriller here. I’m not sure whether to classify this movie as a horror picture or more of a psuedo-intellectual political drama mixed with exploitative gore. Let’s go with all of it, then, shall we?

One thing I approve of is Roth’s patience and willingness to let the story build into the titular setting. He doesn’t just open up with a bunch of dumb teens stumbling through the jungle and happening upon a tribe of indigenous peoples with a taste for human flesh. I mean, there is that, but the money (bloody) shots come later.

No, The Green Inferno spends a great deal of time setting up its characters, particularly lead Izzo (the super-hot one) and her motivations for venturing into Amazon, as well as establishing the story’s half-hilarious, half-overly cynical and heavy-handed social commentary. The dialogue needs a lot of work, but the cast is great when they’re able to slog through Roth’s tongue-in-cheek trolling. Izzo makes a sympathetic final girl, and every other horror archetype (stereotype?) builds upon her, all the way from Aaron Burns’ likable fat-guy to Ariel Levy’s asshole-villain to Daryl Sabara’s stoner (“They got the munchies!“). Singer-songwriter Sky Ferreira adds some much needed spunk and comic relief to the earlier parts of the film.

Once things get to South America, the movie kicks it into high-gear with some exciting set-pieces and great location-cinematography. An intense confrontation between the cast’s activist group and a deforestation squad is arguably the film’s greatest highlight, but thankfully the cannibal-sections of the movie live up to the hype (if you have a strong stomach, that is).

I’m gonna give my honest opinion on the subject of torture-porn and excessive gore in movies: I’m about as much a fan of it as I am a fan of bloodless, gore-free PG-13 action films. I don’t see why films have to teeter on one extreme of the gore-spectrum or the other, why carnage must necessarily be measured according to arbitrary age-ratings, but for its part The Green Inferno handles things appropriately given its writer-director and the fact that it is about cannibals. The film does indeed feature people consuming other people, but on the other hand its cameras don’t linger on the bloodshed nor do the gore effects come without plenty of sardonic commentary to lighten the mood. Alien Resurrection (1997) this is not.

Top: Lorenza Izzo gets more than she bargained for on trip to Peru to protest deforestation. Bottom: Ariel Levy leads the activists into the green inferno.

The aspects of the film I most disliked, however, were the frequent bathroom jokes and poorly used, totally unnecessary toilet humor. For some reason, a guy jacking off in public and a women releasing diarrhea with comical sound editing just don’t seem funny to me. This gag-humor is on par with the worst of Family Guy’s (1999-2019) cutaway gags and ruins the tone of the movie’s best scares.

In the end, Roth surprised me with a scary, entertaining picture that made me rethink traveling to the Amazon. I remain mixed on the film’s social commentary (re: slacktivist trolling), given how I’ve met numerous annoying people just like the characters in film, yet at the same time Roth’s dialogue feels as preachy as the student-groups he’s making fun of. That being said, the thrills of characters facing mercenary contractors at gunpoint and evading Amazonian cannibals (a previously never-before filmed tribe from Peru, for the record) outweigh the tiresome bathroom humor and genre formula. If you’re in the mood for some lowbrow thrills and chills this fall, this one will do just fine.

SUMMARY & RECOMMENDATION: The Green Inferno paces its violence and character development well, knowing that a sense of the inevitable and foreboding are way more effective than showing the goods too soon. Some of the earlier stuff is hamfisted, but I’m glad the film took its time telling the story. Izzo makes for a good protagonist and her supporting cast is almost as good. The film is no more gory than The Walking Dead (2010-present).

— However… Roth’s dialogue is wearisome and his do-gooder trolling is only half funny. The toilet jokes are completely unnecessary and kill the movie’s horror-tone.

—> ON THE FENCE*. The film is worth it for old-school grindhouse enthusiasts and those willing to explore something different, but be sure to bring your barf bag.

? Did I mention how hot Izzo looks?