My favorite type of cinematic format that has flourished on contemporary streaming platforms may be the mini, or “limited” series, be it documentary or fictional narrative. Miniseries have been around for almost as long as broadcast television, but the convenient distribution of Internet streaming combined with streaming platforms’ predisposition toward “binge-watching” has given the format new life. More detailed than feature-length movies, yet less bloated and intimidating than most long-format television series, limited series from Cary Fukunaga’s Maniac (2018) to Mike Flanagan’s The Haunting of Hill House (2018) enable auteur filmmakers to flex their creative muscles in ways unavailable to them within more traditional filmmaking productions.

The current international leader in streaming, Netflix, has focused much energy and resources on projects tailored to regional and local markets, expanding its dominance well beyond the United States and English language-filmmaking, including with original limited series like Delhi Crime (2019). A Latin American example is the Colombian genre hybrid, Frontera Verde, or Green Frontier, an ambitious, unique crime drama that borrows tonal elements from such disparate projects as True Detective (2014, 2015, 2019), Apocalypto (2006), The Green Inferno (2013), and The X-Files (1993-2002). The project is as fantastical as it is dramatic and procedural, involving elements of near prehistoric mysticism common to supernatural thrillers like Annihilation (2018) or LOST (2004-2010), though to a subtler degree. Then again, Green Frontier’s story is fueled by a mass homicide mystery and driven by active characters Juana del Rio and Nelson Camayo, two hard-boiled detectives who must not only catch elusive, borderline supernatural killers hiding in the Amazon, but also navigate the dangerous alliances of drug cartels and corrupt local police. 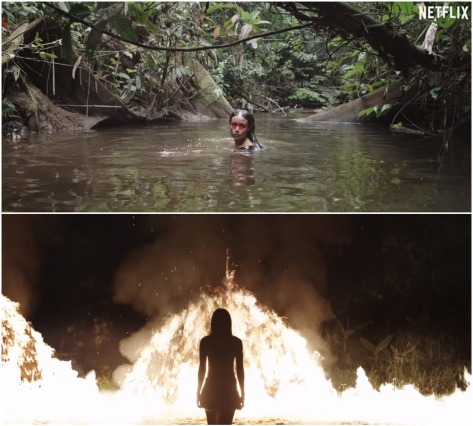 Angela Cano stars as Ushe, an indigenous seer with the ability to communicate with the supernatural consciousness of the Amazon.

Regardless of whatever genre classification one uses to describe it, Green Frontier is a project whose tone, characters, and cinematography are defined by its setting and production location. The Colombian Amazon is as much a character as any paid actor, here, dominating both narrative themes and camerawork. The show’s story dissects the relationship between contemporary indigenous communities and European-American colonialism in great detail, covering topics from cultural genocide to class warfare to environmentalism to the corruption of law enforcement, all enshrouded within the backdrop of the endless green jungles of Colombia’s southern border with Brazil.

Direction of photography is built around this setting, with most shots at low or flat angles and guided by sustained, free-flowing long-takes on a Steadi-Cam. Much of the daytime cinematography uses only natural light, while most nighttime scenes are lit entirely by campfires. This almost nature documentary-aesthetic is jarring upon initial viewing, but the introduction is made easier by the likable characters brought to life by a diverse cast, and soon the series’ guerrilla filmmaking style comes into its own thanks to the story’s overwhelming mood, including its memorable sound-design.

Speaking of Green Frontier’s characters, both minor and major roles are efficiently written and fleshed out to a considerable degree, with no castmembers relegated to superfluous or irritating parts. Co-leads del Rio And Camayo are standouts given their screen time, presence, and diverse emotional range, but supporting characters Angela Cano, Miguel Dionisio Ramos, and Andres Crespo bolster the mysterious backstory of the main plotline, while antagonists Andres Castaneda and Bruno Clairefond represent sizable thematic obstacles for our protagonists to overcome. The latter two characters aren’t quite the terrifying monsters that were Glenn Fleshler’s Errol Childress and his Louisiana death cult in True Detective’s first season, but they kick the hell out of most crime drama villains and are comparable to numerous bad guys from The X-Files.

Now, for the bad stuff: Despite being well paced throughout and using its diverse ensemble cast to portray a broad array of realistic characters, Green Frontier struggles with dialogue and a confusing, truncated finale. Much of the dialogue regarding the show’s fantasy elements is repetitive, hokey, and unimaginative. Numerous voiceovers throughout the extensive flashbacks in particular sound like “noble savage” or New Age gobbledygook from Avator (2009) or a cornball environmentalist documentary. To that end, the series’ final episode is a rushed half-hour that concludes with a bizarre, inexplicable surrealist montage with enough strobe lights to induce epileptic seizures. This incoherent conclusion and its abbreviated running time imply the production either ran out of money or certain locations, actors, equipment, etc. were unavailable for the last episode. Whatever the reason, Green Frontier’s half-assed ending is inexcusable given its straightforward narrative — straightforward at least when considered in chronological order — and the fact that multiple significant plot threads are left unresolved.

These weaknesses in cheesy, tree-hugger dialogue and a lackluster conclusion do not ruin Green Frontier’s charisma, however. The show’s terrific use of location-photography, clever melding of fantasy and crime drama tropes, and strong characters make for a unique murder-mystery against the backdrop of the Colombian Amazon. Despite its stumbling at the finish line, Green Frontier uses its limited series format to great effect, emphasizing an intimate, multilayered diegetic backstory and deepening its protagonists beyond what would’ve been possible in a feature-film. Thanks to its potent genre-hybridization, this borderland is creepy, sexy, violent, and human in all the right ways.

Left: Leads Juana del Rio (right) and Nelson Camayo (left) form an uneasy partnership during their investigation of a mass-murder. Right: A mysterious, multi-ethnic tribe, the Ya’arikawa, stalk the edges of the Amazon as our heroes investigate.

SUMMARY & RECOMMENDATION: Though it’s shot like an expensive nature documentary and acted like an HBO crime anthology, Frontera Verde feels most like a Colombian take on The X-Files with heavy doses of Mel Gibson’s Apocalypto and Damon Lindelof’s LOST. Fans of all the above should take well to this miniseries, which is comparable to some of the best limited series on Netflix.

— However… Green Frontier verges into hokey Avatar-territory on occasion with its spiritualist rambling, especially during its backstory segments. This distracts from the otherwise intelligent, mature themes of colonialism and ethnic conflict throughout the narrative, as does the story’s underwhelming finale.