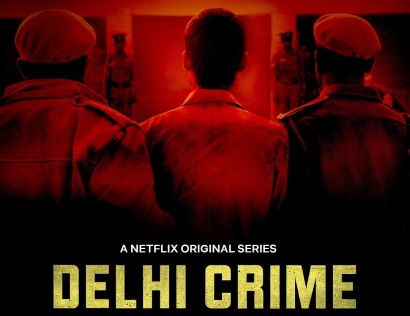 I’ve gone back and forth in my head over whether I should review Richie Mehta’s critically acclaimed debut season of Delhi Crime, a Netflix Original crime series that dramatized the 2012 Delhi gang rape. I say “debut season” because the program was upgraded to an anthology series and a follow-up season greenlit by Netflix less than a week after the series debuted in March of 2019. This begs the question: Is it appropriate to evaluate a cinematic project that could be interpreted as “unfinished?” How future seasons will handle libel concerns regarding their true crime material and whether future criminal mysteries will be based on actual events remain to be seen, but I’ve decided this original season is unique and impactful enough to be evaluated as a singular, standalone project. 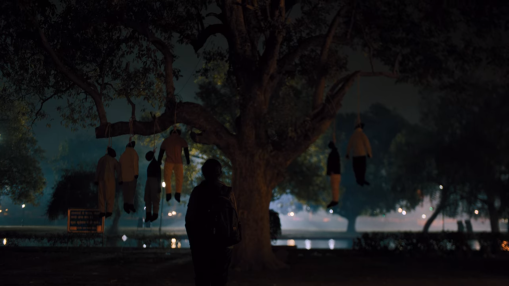 In the show’s haunting final shot, the camera tilts up as Rasika Dugal gazes at criminals hanged in effigy from a tree on the Rajpath near India Gate.

Numerous South Asian peers of mine have highlighted the positive (e.g. Sacred Games [2018-2019]) and negative (e.g. Betaal [2020]) experiences of other Indian Netflix Original shows, but awareness amongst my social circle of the likes of Delhi Crime pales in comparison for some reason. Other than the inherent controversy of the show’s subject-matter, the brutal gang rape and murder of a 23 year-old woman on a private bus in India’s capital, I’m not sure why this is the case, at least anecdotally; Delhi Crime handles its touchy, tragic subject with incredible precision and tasteful cinéma vérité aesthetics, recalling the tone and style of previous influential crime epics like The Wire (2002-2008), Elite Squad (2007), and The Secret in Their Eyes (2009). Its procedural narrative structure balances the breathless pace of police detective work with a nuanced portrayal of the volcanic political backdrop of its titular city in the days following the story’s inciting incident. Over its tight, focused seven episodes, Delhi Crime not only provides mature commentary on its real-life event in particular and sexual violence in general, but also the interplay between public perceptions of controversy and the personal lives of law enforcement.

What’s most noticeable about Delhi Crime upon first watch is its on-location photography and use of cinéma vérité handheld camerawork to capture the mood and feel of Dehli, much like how Sacred Games used the backdrop of Mumbai to define its crime saga. If Mumbai can be likened to a Western coastal city with a huge entertainment industry like Los Angeles, Delhi feels like a much larger, denser version of the El Paso-Ciudad Juárez metropolitan area mixed with Washington DC: A bustling, hot, arid cornucopia of concrete, sweaty bodies, and massive political institutions. Mehta’s procedural drama takes advantage of this audiovisual tone to create a unique sort of noir-aesthetic in both night and daytime settings; policework at night feels seedy, dangerous, and yet also tranquil at times, while events shot under the South Asian sun are frantic, fast-paced, and exciting. These tonal qualities translate between Delhi Crime’s dramatic scenes and action-packed chase sequences, thanks in part to Johan Heurlin Aidt’s flexible cinematography, which owes much to documentarian filmmaking yet doesn’t allow that style to take over the story when a more restrained touch (i.e. static shots, dollies) is required.

The series’ versatile camerawork is necessary for the narrative’s sprawling focus, which covers not only the brutal sexual assault at the story’s core, but also the politics of Delhi and the diverse personalities of a major city police force. What’s most impressive about Delhi Crime’s teleplays are how well they mix the intimate with the epic: A single episode may transition from our main cast’s fervid search for the five principle rape suspects throughout Uttar Pradesh to massive civilian protests at India Gate to a police lieutenant browsing for marriage prospects for his child during some downtime. The show’s large ensemble cast rival’s that of a season of The Wire, and it develops most every character with patience, humanizing the pursuit of justice rather than distracting from it.

If I had any complaints with Delhi Crime, they would concern the repetitiveness of multiple police characters complaining about how law enforcement are not respected enough by the public nor funded enough by the government. This show uses law enforcement as its vessel, its narrative point-of-view to examine sexual violence, law and order, and community unrest in India, so a thematic emphasis on their livelihoods and opinions make sense; however, the sheer number of diatribes spouted by castmembers about how law enforcement are underappreciated reads like the writers had a bit of an agenda, though thankfully the dialogue never becomes overly preachy. 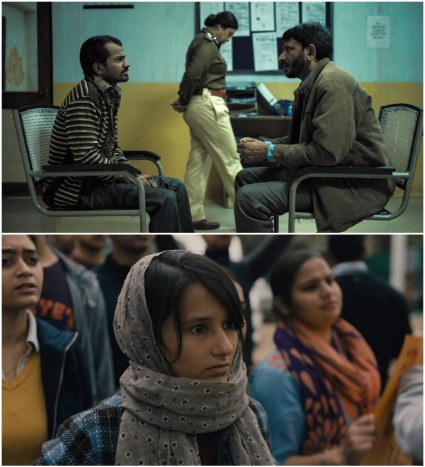 Top to bottom, Delhi Crime remains one of the standout Netflix Original productions from South Asia. Its success, along with Sacred Games, helped establish the streaming giant’s native productions in India, and I look forward to its future status as an anthology project. This original, standalone storyline, however, is a worthwhile project on its own terms for anyone interested in current events, Indian politics, crime dramas, or just a plain, old-fashioned, good TV yarn. Its diverse, multifaceted cinematography melds with its broad narrative scope to capture the cultural impact of the 2012 Delhi gang rape similar to how Kathryn Bigelow and Mark Boal’s Zero Dark Thirty (2012) summarized the assassination of Osama bin Laden. It’s the type of subject that could be analyzed in a typical documentary or investigative article from the New York Times, but this narrative cinematic dramatization is what elevates that artistic analysis to another level.

SUMMARY & RECOMMENDATION: Delhi Crime finds a difficult balance between intimate, detailed characterizations and the sprawling sociopolitical implications of crime and punishment in a major world city. It fires on nearly all cinematographic and editing cylinders to condense its massive plot into seven concise episodes that wrap into a satisfying, if unsettling conclusion.

— However… sections of Delhi Crime’s dialogue descend into generic whining about society’s indecisive expectations of law enforcements too many times.

? Earlier this year in Qutub Vihar, there was a girl gang-raped with a broken beer bottle; she died. The accused were immediately caught and sentenced to death. It happened very quietly, so it missed the media radar. You’re trying to assign meaning to this? Forget it…