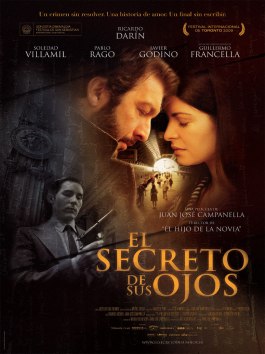 Dark in its portrayal of Argentina’s “Dirty War,” The Secret in Their Eyes is a historical crime thriller that does what many crime thrillers have done in the past, namely, examine the consequences of violent crime to those closest to it. It’s familiar territory we’ve seen countless times before in quality movies from Seven (1995) to The Silence of the Lambs (1991) to The Dark Knight (2008). Despite covering well worn ground, The Secret in Their Eyes (STE) constructs an engrossing mystery armed with a variety of interesting players and wraps it with a startling finish. It doesn’t blow my socks off the way some of my peers claimed it would, and it doesn’t go much outside its genre parameters, but it’s a solid thriller that remains intense throughout.

STE centers on a rape-murder case and the individuals associated with it, including the victim’s husband, the detectives assigned to the case, the judge who prosecutes it, and of course, the murderer himself. The primary action takes place in the 1970’s during the first years of Argentina’s Dirty War (1976-1983), a violent time for the nation when criminality often went unpunished due to conflicts between Marxist revolutionary groups and state-sponsored terrorism initiatives. The political backdrop to this narrative is fantastic, but unfortunately it’s not fleshed out or explored in detail. This is one of the major missed opportunities of the screenplay that frustrated me, as the side effects of the conflict visibly influence the narrative at several key points, yet nothing much further is mined from this interesting historical setting.

What is explored in detail is the crime at hand, as well as the killer and those assigned to catch him. It’s a classic cat-and-mouse chase we’ve seen dozens of times before, like I said. The hunt and pursuit are exciting, featuring interesting detective work as well as an impressive long-take chase-scene inside a football stadium. All the activity in and surrounding the pursuit of the antagonistic criminal is engaging stuff that keeps you glued to the screen.

When the story fast-forwards to the present day, things start to slow down. About a quarter of the movie is told from the perspective of the detective (Ricardo Darin) and the judge (Soledad Villamil) assigned to the murder case twenty five years or so after it was closed. It concerns Darin and Villamil discussing the case in hindsight and how it has since inspired Darin’s character to write a novel based on his accounts. This present tense is further wrapped in the two characters flirting with each other and rekindling an old romance. These sequences in the present are a bore because not much is going on beyond this subtle flirting and Darin and Villamil discussing how the case affected them. This is by its very nature a repetitive exercise because we already understand how the crime affected them in the flashbacks — we witnessed the effects of this horrific incident on these characters, so why do we have to have it recounted to us again? Furthermore, the romantic dialogue between Darin and Villamil grows old. The central romance isn’t that captivating.

Top: While relatively dull, the romance does provide two of the film’s major characters, Ricardo Darin (right) and Soledad Villamil (left) with acceptable arcs as they come to terms with each other. Bottom: Darin and Villamil meet primary antagonist, Javier Godino (left), in the most tense scene of the film.

The one interesting aspect of these flash-forward scenes is the revelation that comes at the end of the film. It’s gripping in light of all the drama leading up to it, so I give the filmmakers credit for ending the mystery tale on a strong note. There’s an obligatory epilogue where Darin and Mallamil’s characters reconcile romantically, but I’ll forgive that eye-roller since it’s so brief and prefaced by such a cool scene.

In summary, I enjoyed The Secret in Their Eyes as a solid thriller. I wouldn’t place it among the upper echelon of high-quality foreign films I’ve seen, nor among the more famous domestic crime thrillers from Hollywood, for that matter. It’s more than deserving of your time if you’re into foreign or Latin American films, but it’s not of a high enough caliber to impress my elitist mind, while at the same being far too dark and grim for most casual viewers. Had the movie dropped the emphasis on the non-linear storytelling, The Secret in Their Eyes could’ve expounded on its fantastic historical setting and its already fascinating criminal mystery. As it stands now, the movie is good, just not anything to shout about.

SUMMARY & RECOMMENDED: The Secret in Their Eyes is standard but reliable fare. The bad guy is despicable yet surprisingly human, and his captors pursue their objective with exciting vigor and cinematic style. The soccer stadium long-take is impressive.

— However… the story wastes much time on uninteresting character development in the present day setting.

? A guy can change anything. His face, his home, his family, his girlfriend, his religion, his God. But there’s one thing he can’t change: He can’t change his passion…