Netflix has secured international distribution rights for numerous non-English language properties that otherwise might never have built followings outside their regional core audiences (e.g. Frontera Verde [2019], Delhi Crime [2019], Kingdom [2019-2020], Calibre [2018], etc.). The streaming platform’s now considerable non-English language library is on par with many niche cinephile services like Mubi or Shudder; the main differences between a platform like Netflix and something like Mubi is that the former has a much, much, much larger offering of titles, in part because Netflix’s recent massive expansion has emphasized library quantity over quality, and because the company has invested in local productions around the globe. In short, while a company like Netflix has its fair share of cheap, 1990s-esque “straight-to-home-video” titles, its mammoth reach and willingness to cater to as many demographics as possible — distinct from major Hollywood studios’ goal of pandering to as wide a singular audience as possible — ensures that it either distributes as many types of films, from great to bad, as possible, or produces them itself. 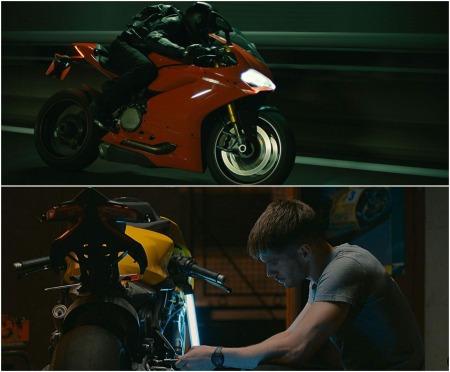 Top: Francois Civil’s protagonist desires to make a living through his motorcycle skills… and ends up getting more than he bargained for. Bottom: Civil finds a middle-ground of sorts between drug-running for organized crime and abandoning his racing career altogether.

Yann Gozlan’s gangster film, Burn Out, is not an in-house Netflix production, but is a pertinent example of the platform’s expanding international reach and penchant for highlighting otherwise limited release genre films. Part traditional crime drama and part vehicular fetishist exercise, Burn Out (henceforth, Burnout) is a fun, charismatic, and tense fish-out-of-water tale about an aspiring professional motorcycle racer (Francois Civil) whose ex-wife (Manon Azem) falls in debt with a local Parisian gypsy gang; in order to protect both her and their son, Civil’s protagonist attempts to negotiate on their behalf with the gang’s leadership, but is coerced into becoming a high-speed drug mule thanks to his motorcycle skills in order to settle their debt.

The charm of Burnout is similar to that of a later released Civil picture, The Wolf’s Call (2019, or Le Chant de Lupe), whereby a traditional screenplay premise (a hotshot, cocksure protagonist with a specialized skill must rebel against or work within a rigid system amidst a life-or-death scenario) is given a slight genre twist to enhance its presentation. The direction of cinematography handles that genre twist (submarine warfare in The Wolf’s Call, cyclist drug-running in Burnout) with style and pizzazz, while a rock solid, well paced screenplay provides a neat framework on which to hang that story. While in both Civil pictures, the audience knows from the outset the story can end only a handful of ways, the fun is watching the execution of that story and how creative Civil’s protagonist must be in order to escape with his life.

As far as direction is concerned, Gozlan and director of photography, Antoine Roch, excel at a variety of motorbike and foot chase sequences, taking advantage of lush visuals from neon lights against nighttime darkness, quick yet precise edits, and several impressive tracking shots that enhance tension without calling attention to themselves. Visual direction is strong outside of the vehicular set-pieces as well, whereby traditional dramatic crime sequences are staged for maximum suspense, minimal dialogue, and creative character moments. While Burnout’s flashiest attributes and most of its marketing have to do with its motorcycle chases, the core of the movie is its tale about an ordinary, relatable everyman caught in the affairs of a local mob, due to no fault of his own. Civil’s considerable range and likable character sell that human connection, and the strongest moments of the film are where his characterization, the dramatic crime elements, and the slick motorcycle racing intersect.

A great example of that is a prolonged montage sequence about midway through the film that cross-cuts Civil’s civilian life, including his tryouts on a sponsored professional racing circuit, with his moonlighting as a drug runner, where the editing rhythm steadily increases to emphasize the deterioration of the former. This sort of editing showcase is representative of the film’s general strengths, in that writer-director Gozlan’s approach doesn’t test any boundaries yet executes conventional filmmaking techniques with ironclad precision. Like the sort of smaller, mid-budgeted genre pictures that Hollywood doesn’t make anymore, Gozlan’s film is formulaic in the best ways.

Then again, Burnout stumbles in one significant area despite its conservative approach, and that is its ending. Civil’s protagonist boasts a great arc that feels both satisfying and realistic, but his (mild spoilers… ) ultimate escape from his mob extortionists feels trite and akin to a deus ex machina. This is a shame, because through 90% of its running time, all of the events that take place and Civil’s reactions to them feel plausible. Aspects of Civil’s rescue from his antagonists are implied ahead of time, yes, but I would’ve preferred a final chase sequence involving only Civil’s wit as the cherry atop this story; hell, even involving law enforcement in this story’s resolution would’ve been more satisfying than the rout Gozlan chose, which leads me to believe the ending we got may be a result of a limited budget.

Aside from that non-trivial weakness, Burn Out is a well oiled machine of a character-driven crime drama, armored with a heavy shell of a racing action movie to give it some surface-level individuality. Yann Gozlan’s reliable genre picture may not stand out to general audiences used to bombastic, cartoonish chase sequences of the Fast and Furious (2000-present) variety, and non-French speaking audiences may not even be aware of its existence, but highlighting underrepresented yet deserving genre pictures is one of my favorite pastimes. Netflix subscribers have little excuse not to try this tight, succinct, well paced gem of a French auteur picture, especially if you need further proof that contemporary French cinema is not limited to artsy, dramatic awards-bait movies from the likes Michael Haneke. Netflix nabbed us another winner.

SUMMARY & RECOMMENDATION: It’ll win little recognition for originality, but with respect to quality genre films made by directors with a singular vision, Burn Out is a workhorse of a crime drama and believable vehicular spectacle. Writer-director Yann Gozlan is neither too fancy nor too safe in terms of presentation, while the overarching story of lead Francois Civil’s working-man struggles are as airtight as any screenwriting professor could demand, save for…

— However… the ending, which leaves much to be desired. Still, Gozlan makes up for this in part with a satisfying, stylish epilogue.

? Francois Civil is always sweaty in every role of his that I’ve watched. Get a towel, man!