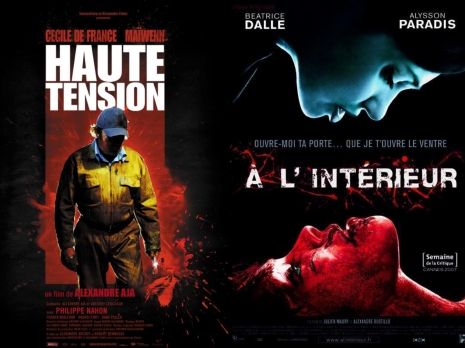 Watching the likes of Julia Ducournau’s Raw (2016) and Titane (2021), not to mention Gaspar Noé’s Irréversible (2002) and Enter the Void (2009), led me on a downward spiral of intense, fucked-up French horror films produced throughout the 2000s that tested even my limits for cinematic bloodshed. Today’s topics of review are Alexandre Aja’s Haute Tension (English = “High Tension”) and Julien Maury and Alexandre Bustillo’s À l’intérieur (English = “Inside”), films that, along with Noé’s Irréversible, are often cited as prominent examples of the New French Extremity, a movement of transgressive French — and perhaps European more broadly — horror cinema that pushed the boundaries of explicit violence within the genre near the turn of the millennium. The New French Extreme is credited with influencing the later waves of “torture porn” within mainstream American horror around the same time, which included works by successful filmmakers like James Wan, Leigh Whannell (e.g. Saw [2004-2006]), Eli Roth (e.g. Hostel [2005, 2007], The Green Inferno [2013]), and Rob Zombie (e.g. House of a Thousand Corpses [2003], The Devil’s Rejects [2005]), among others, collectively referred to as “The Splat Pack.” 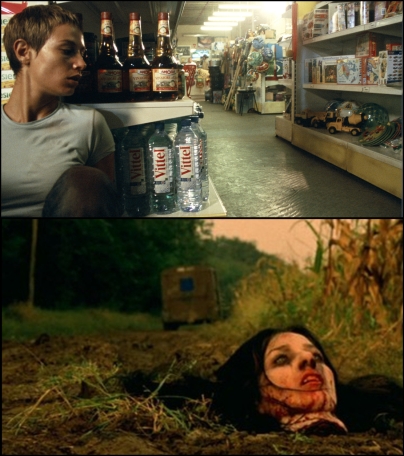 Top: Cecile de France evades Philippe Nahon in a quiet gas station halfway through High Tension, an example of the film’s emphasis on stealth. Bottom: Earlier, Nahone drops a severed head out of his truck that looks suspiciously similar to one of the film’s main costars.

What High Tension and Inside are not is derivative, though they take direct inspirations from 1970-1980s American slashers (e.g. The Texas Chainsaw Massacre [1974], Halloween [1978]) as well as home invasion thrillers of all stripes, and yet I do have significant problems with both of them; each of these French horror pictures are too slick, well shot, and well paced to be rejected as mere exercises in character suffering or audience endurance. High Tension, for one, lives up to its namesake given how well it maintains suspense throughout its first two acts (about 70 minutes of its 90-minute runtime), while Inside’s creepy ambiance and wonderful use of location are a showcase for how to establish mood. Problems with both films have to do with how they run out of steam by their stories’ end, which is a function of a ludicrous, unjustifiable narrative twist in High Tension and sheer repetition of violence for Inside.

High Tension ostensibly revolves around the murderous assault by antagonist Philippe Nahon against an isolated family farmhouse in the French countryside, where protagonist Cécile De France joins her classmate Maïwenn Le Besco and family for a weekend stay. The setup for the titular mayhem establishes just enough personality of all principal characters and foreshadows the carnage to come without revealing too much about Nahon’s serial murderer. Once the home invasion starts, the film alternates between realistic, heavy carnage and stealthy games of cat and mouse between De France and Nahon… until that twist.

Although the new millennium era’s French Extreme never achieved widespread recognition at home or abroad, High Tension’s notorious third act revelation remains one of the more polarizing topics amongst horror cinephiles to this day. I regret to inform readers I belong to the apparent majority of viewers who reject Tension’s M. Night Shyamalan-esque narrative subversion as unbelievable, insulting, inexplicable, and just plain bizarre. Without spoiling things, this movie’s narrative realignment is, to me, the equivalent of revealing an entire plot to be a dream sequence, and reduces all primary characters to tasteless clichés even in the most generous interpretations of the screenplay.

Just as gory but more straightforward in execution is Inside, written and directed by Julien Maury and Alexandre Bustillo, another batshit insane French horror flick that reframes the traditional home invasion thriller as a story about maternal jealousy, rage, and fetal abduction. Protagonist and expectant mother Alysson Paradis survives a car crash in the film’s prologue that kills her husband (see also: The Babadook [2014]), and months later in her third trimester is stalked by a mysterious woman (Béatrice Dalle) who wishes to steal her unborn child. The opening act is even more suspenseful and creepy than the start of High Tension, utilizing extreme low-lit interiors and shadows to emphasize the danger Dalle poses before she finally strikes. Like Tension, Inside explodes with violence by the 30-minute mark, and the constant shift in power dynamics between various minor police characters, Paradis, and Dalle keeps the bloody action fresh to a point.

My primary complaints with Inside, similar to High Tension, have to do with its ending; while it doesn’t pull the rug out from under its audience, Inside’s over-the-top violence runs out of steam by story’s end, and the ultimate fate of Paradis’ main character I found unsatisfying despite some minor revelations (good ones, that is) along the way. Had Inside’s screenplay structure been inverted with 2/3 of the script being buildup and 1/3 being an explosive hack ‘n slash gore-fest with a less depressing conclusion, I think the story would’ve hit that much harder.

As they are now, High Tension and Inside represent the cinematographic prowess of the New (now old) French Extreme, which inspired at least a decade’s worth of tired, pretentious, wannabe edgy horror movies before the likes of James Wan and Leigh Whannell transitioned from Saw to The Conjuring, Insidious (2013-), and The Invisible Man. The horror genre has never returned to the sheer gruesomeness of the 2000s at least in a mainstream sense, and I think that’s for the best given the tendency of horror filmmaking to go way overboard when emphasizing graphic violence as the main feature of a film’s premise. Alexandre Aja, Julien Maury, and Alexandre Bustillo appear far more inventive and focused in directorial vision than most of what I’ve seen from Wan, Whannell, and especially Roth, but even the works by the former discussed here I have major problems with despite their influence.

From Inside, Beatrice Dalle looms over Alysson Paradis (left) in between waves of police rescuers (right).

SUMMARY & RECOMMENDATION: Films like High Tension and Inside represent interesting case studies, particularly in hindsight, of European genre trendsetters that guided the development of mainstream horror for at least a decade before the more family-friendly, softball pictures of Paranormal Activity (2007-), The Conjuring, et al. established themselves by the 2010s. Both pictures contain impressive choreography, believable practical gore FX, and impressive, suspenseful pacing, ensuring no audience will be bored watching them.

— However… High Tension boasts one of the most asinine, misguided narrative reversals I’ve seen in my decades of cinephilia, while Inside’s nonstop violence throughout Acts Two and Three tested my tolerance for excessive, gruesome visuals; both films end unsatisfactorily.

—> High Tension is NOT RECOMMENDED (you’d have to pretend 1/4 of the film doesn’t exist to enjoy it) and I’m ON THE FENCE with regards to Inside (you’ll never look at a Caesarean section the same again).

? What’s the chemical mixture of all that fake blood?