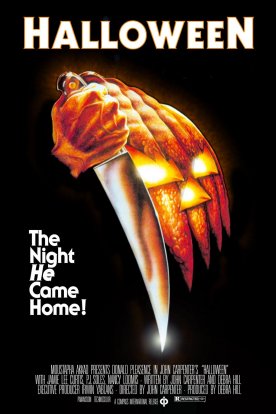 John Carpenter’s Halloween borrows many elements from Alfred Hitchcock’s horror-progenitor, Psycho (1960). Both the killer’s principle stabbing weapon and voyeuristic stalking of its victims hearken back to the days of Norman Bates, while the hulking, faceless figure of Michael Myers references the notorious Leatherface from The Texas Chainsaw Massacre (1974). Also like both films, and decidedly unlike many of its later descendants, Halloween contains little blood or graphic violence, instead relying on lighting, inventive camerawork, and atmosphere to create its dread. The film is also notable for being one of the few mainstream commercial successes of Carpenter’ long career, one other being 1981’s Escape from New York. Though Carpenter’s Hollywood career would take an undeserved dive following The Thing (1982), from which it would never recover, Halloween remains the auteur’s most recognizable and enduring legacy.

Halloween is similar to most other slashers in that its characters are largely devoid of memorable personalities beyond youthful good looks and promiscuous behavior. The acting is a step above something like Chainsaw Massacre, which isn’t surprising considering Jamie Lee Curtis stars as the female lead. Donald Pleasence gives a decent turn as the determined psychiatrist of the murderous Myers, although he doesn’t have much to work with in the way of memorable dialogue or character development. Everyone else are run-of-the-hill ’70’s teenagers who deserve to die horrible deaths for their crazy hippie lifestyle. And die horrible deaths they do.

Although Myer’s escape from an asylum is portrayed haphazardly, and Carpenter uses the film’s musical theme too much, the majority of Halloween is fantastic, creepy goodness. The stalking portion of the film’s first act foreshadows the horrors to come, and once night falls on the trick-or-treat holiday, it’s all about the thrill of the hunt. Admittedly, the number of times Myer’s masked face pops into the frame almost turns the middle act into a goofy “Where’s Waldo”-scenario, but once the killing starts, the initial awkwardness is all worth it.

Carpenter is an expert in establishing both foreground and background elements of every shot. The mise-en-scene works wonders in the nighttime scenes especially, bottling up tension until Myers strikes. The murders are violent, yet they never verge on exploitation as in Chainsaw Massacre. Easily the best scene is where Curtis discovers the bodies of her murdered classmates, arranged in an almost playful fashion in a single bedroom.

An example of Carpenters dept use of lighting.

Halloween is a well crafted piece of frightful entertainment. It’s fun mainly because of Carpenter’s ability to stage scenes in such a way that you know what’s going to happen next, but you’re scared anyway. The movie will perplex younger viewers who are more accustomed to gory violence in their horror films, including many of the Halloween franchise’s later incarnations. It’s sad the way many of the film’s descendants failed to recognize the core elements that made the original a classic, namely expert lighting, effective camerawork, and memorable mise-en-scene. Regardless, the original is a fine showcase of John Carpenter’s talent as an orchestrator of cinematic fear. It pays homage to the classical and grindhouse hits that came before it, remixing their DNA with Carptenter’s auteur creativity to contribute something new to the genre of horror.

SUMMARY & RECOMMENDATION: Carpenter’s effective direction and narrative pacing make Halloween purr like a psychopathic killer… Its mise-en-scene is particularly commendable for the fear it generates at every turn.

— However… the cast is vanilla and their lines aren’t much better.

? Really, nobody thought of “Halloween” as a movie title before this?