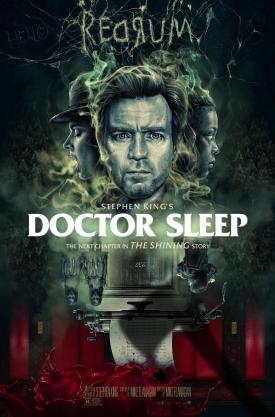 The Shining (1980), an adaption of Stephen King’s 1977 novel of the same name, remains one of the most iconic horror films of the 1980s and one of Stanley Kubrick’s most famous works. Kubrick was one of the first directors to utilize SteadiCam cinematography with that picture, a then new technology that allowed for the film’s now recognizable fluid, unsettling tracking shots that fleshed out The Shining’s classical setting, The Overlook Hotel. That horror film is often cited as characteristic of Kubrick’s influential camerawork and composed visual style, his meticulous use of symmetry in everything from set-designs to the blocking of his actors to the near geometric composure of his camera movements.

Less iconic aspects of The Shining, and one could argue of Kubrick’s films in general, were the human elements of his haunted hotel; Kubrick is described as a demanding filmmaker who clashed with many of his actors on set, and The Shining in particular is well known for how Kubrick pushed actors Shelley Duvall and Jack Nicholson to extremes during their hectic principal photography shoots. 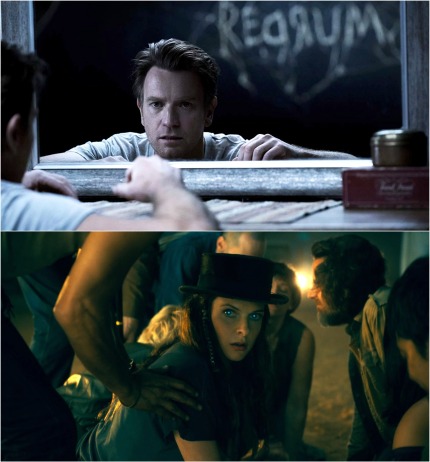 Top: Amidst a traumatic psychic cry for help, Danny Torrance (McGregor) awakens to find a familiar message on his apartment wall. Bottom: Rose the Hat (Ferguson, center) pauses her feasting of an innocent child as she senses a psychic eavesdropper.

King’s negative reaction to The Shining on film is notorious, too, having stated numerous times over the decades how much Kubrick’s interpretation of his original work altered the core themes of the story and its characters’ development. I happen to sympathize with many of the author’s criticisms despite loving Kubrick’s direction, including but not limited to Duvall’s one-note performance and her unconvincing chemistry with Nicholson, whom viewers can tell from the outset of the movie will not be sane by story’s end.

Fast-forward to 2013 when King released his long-in-production sequel to The Shining novel, Doctor Sleep, which featured a surviving major character from the former, Danny Torrance, son of the corrupted Jack Torrance (Nicholson’s role in the film adaptation) who chased his family around the Overlook with a fire axe. At the same time, horror films have dominated the 2010s as much as comic book-adaptations, but with a wider range of budget options, from the cheap (e.g. The Conjuring [2013], Don’t Breathe [2016], Get Out [2017]) to the expensive (e.g. It [2017, 2019]). Following the success of It in particular, Doctor Sleep’s screen-adaptation was greenlit with a final budget approximating $50 million, no small fee for a horror film (It part I cost about $33 million, while part II was made for $79 million).

What came as less of a surprise was the man writing and directing this latest high-concept Stephen King-adaptation: Mike Flanagan. Flanagan has made a name for himself writing and directing everything from Oculus (2013) to Ouija: Origin of Evil (2016) to the Netflix miniseries, The Haunting of Hill House (2018), all critically well received, financially successful horror narratives. Most pertinent to this discussion of Doctor Sleep, however, is Flanagan’s popular adaptation of King’s 1992 novel, Gerald’s Game (2017), which was long thought by Flanagan to be “unfilmable” due to its internalized stream-of-consciousness structure.

The concept of Doctor Sleep is as peculiar and idiosyncratic as any narrative King has written: Decades after the events of The Shining, a grown, alcoholic Danny Torrance (Ewan McGregor) keeps evil spirits at bay and suppresses his psychic abilities with booze; he puts his life in order after hitting rock-bottom, only to discover via telepathic communication with similarly gifted children (e.g. Jacob Tremblay, Kyliegh Curran) that a group of “psychic vampires” (e.g. Rebecca Ferguson) are wandering the countryside, feeding on the mystical essence of those with Shining abilities, whom they torture and kill. The film only grows stranger from there.

Pealing back those supernatural horror layers, however, reveals a straightforward coming-of-age tale about intergenerational trauma, struggling with addiction, and embracing one’s “superpowers” to protect those who can’t protect themselves. Doctor Sleep (henceforth, DS) feels like a natural evolution from Kubrick’s pessimistic, nihilistic adaptation of King’s novel, a dark, scary, yet altogether more hopeful view of a world inhabited with formidable predators and those brave enough to stand up to them.

The great thing about DS is how effective it is as a second act conclusion to the fabled act one that was The Shining. Much like how Trainspotting 2 was itself about nostalgia, people’s inability to let go of their youth when adulthood didn’t go as planned, DS focuses on the emotional baggage its protagonist accrued from the previous film. These legacy sequels are passing the thematic torch from matured versions of older characters to new, younger characters a la The Force Awakens (2015).

As far as the direction of DS is concerned, Flanagan combines subtle yet prolific special FX with great framing to help his audience understand character geography, describe how various characters’ supernatural abilities operate, and limit exposition or other unnecessary dialogue. The film covers immense narrative ground and develops multiple characters extensively, making great use of its long running time (152 minutes) to explore various iconography and plot-devices introduced in The Shining without indulging in them.

Reading numerous critical and amateur reviews of this legacy sequel, I’ve concluded that most people’s main complaints with the movie regard (1) its lengthy running time and (2) its complicated relationship to Stanley Kubrick’s iconic Shining. While I can sympathize to an extent with the former criticism, I cannot in good conscience excuse the latter. Soft-reboots and legacy sequels of beloved classics (e.g. Trainspotting 2, The Force Awakens, Predators [2010], Blade Runner 2049 [2017], etc.) must endure harsher standards than spinoffs or standalone films adopting a brand label out of marketing convenience (e.g. Joker [2019], Captain Marvel [2019], Hobbs & Shaw [2019], etc.). Connect a new release to a popular contemporary franchise or stylistic movement, and your film will be judged on a curve, but put too much distance between your direct sequel and a trendsetter that’s stood the test of time, and you’re asking for trouble. Doctor Sleep takes its horror seriously like many popular contemporary scary movies do and should, but it was always going to be too close to The Shining for its own good.

SUMMARY & RECOMMENDATION: Spooky, moody, and heartfelt, Doctor Sleep treats its characters and its audiences with respect, depicting gruesome visuals and tortured souls (including children!) through a combination of surrealist imagery and powerful cinematography, yet never without purpose. Its story may be long in the tooth, but that story is neither wasteful nor bloated, allocating time to character development and narrative tension above all else.

— However… there is no way to overlook how Doctor Sleep is as long-winded as any major Hollywood production these days. Minor villains like Emily Alyn Lind are cornball.

—> RECOMMENDED, for a horror movie with heart.