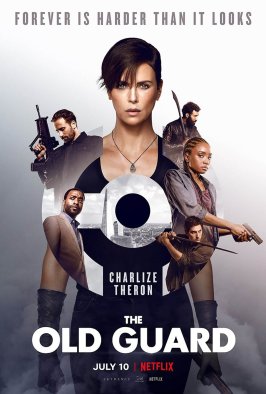 I noted before how Netflix may be taking advantage of Hollywood’s temporary(?) theatrical absence during the ongoing (circa July 2020) COVID-19 pandemic with moderate budgeted, high-concept titles like Extraction (2020). The Old Guard, the latest vehicle for star Charlize Theron and genre debut of dramatic filmmaker, Gina Prince-Bythewood, looks to continue that trend. Described as a progressive, dynamic comic book-movie by some and a thinking-man’s action movie by others, Greg Rucka’s adaptation of his webcomic of the same name fits neither broad category, in fact, and may be one of the most mismarketed quasi-genre pictures in years. I would also describe the film as the most disappointing of 2020 thus far, which perhaps isn’t saying much given the utter theatrical wasteland wrought by circumstances outside the film industry’s control. 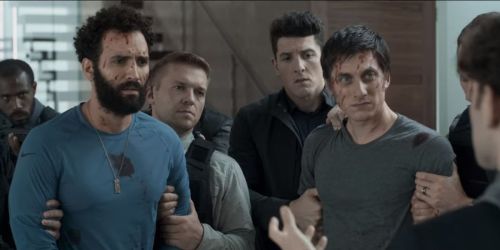 Marwan Kenzari (second from left) and Luca Marinelli (third from right) compete with villain Harry Melling (far right) to see whom can give the blandest supporting performance of The Old Guard.

With regards to The Old Guard’s erroneous genre identification, the story as told on-screen is neither an action movie nor a superhero narrative, and I haven’t tagged it as such. The movie barely qualifies as a “genre film” (e.g. science-fiction, fantasy-adventure, thriller, Western, etc.) given its overwhelming dramatic focus on downtrodden, emotional monologues, cryptic backstories, preachy dialogue, and heavy-handed thematic introspection. There are occasional action sequences, sure —- I counted 3-4, depending on exactly how you delineate them, all less than five minutes — but their general lack of buildup, style, and impressive stunts imply these are not the director’s focus, and their impact on the story remains minimal. This is a melodramatic character story with mild fantasy overtones and occasional, almost pointless action flourishes.

This action bait-and-switch might not be a problem if The Old Guard’s dramatic content were up to snuff, but the film’s otherwise admirable themes of mortality, nihilism, and humanitarianism are undercut by uninteresting characters, bland dialogue, slow pacing, flat cinematography, and one of the worst supporting casts I’ve seen in any high-profile film in years. With regards to the film’s characterizations, the starring cast outside of Theron are flat, generic, and uninteresting, though I’m sure they weren’t helped by Rucka’s lackluster, corny dialogue and the incoherent, wandering focus of the story. Heroic characters played by KiKi Layne, Matthias Schoenaerts, Marwan Kenzari, and Luca Marinelli, as well as principle villain, Harry Milling, all feel either miscast, underwritten, or overacted. Either way, the sheer dearth of memorable performances leaves me unimpressed with Prince-Bythewood’s acting direction.

Making matters worse is the slow, plodding nature of the story, which has little rhythm or sense of urgency outside a passable, yet still bloated third act. The opening act in particular feels flat and meandering due to a lack of establishing sequences explaining whom our main characters are and what the hell is going on. Numerous scenes of characters walking down hallways, performing menial tasks, and engaging in pointless conversations fail to advance the plot or inform the characters through interesting, visual ways. Perhaps if the direction of photography was stylized or inventive, the film’s engorged 125-minute running time might be acceptable, but as it is, the film feels lifeless outside one or two brief action sequences and an occasional campfire monologue. I was shocked to note venerable English cinematographer, Barry Ackroyd, contributed to this film.

There is little I liked in The Old Guard besides a reliable lead performance from Theron, the unapologetic blood and gore, and a few neat kills in the final action set-piece. A quick fist-fight between Theron and Layne about 45 minutes into the film provides some internalization of their characters, though it’s over before anything too interesting occurs. 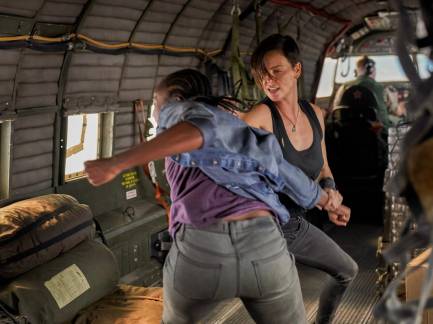 Charlize Theron grapples with KiKi Layne in one of the film’s better, but quite brief, action sequences.

I could elaborate further on the movie’s dull cast and hamfisted “Big Pharma” villains, but I’d start repeating myself. I haven’t even touched on the movie’s inexplicable use of pop songs during its action sequences, nor the complete lack of narrative tension or stakes due to our principle heroes’ immortality, but those are minor complaints next to The Old Guard’s boring characters, bland supporting cast, and snail’s pace. Perhaps the worst thing about the film is not how it misrepresents itself as an action film, but rather how I failed to understand what the hell the movie was about by story’s end. Is it about “doing the right thing,” even when it means abandoning your family for no reason at all? Is it about true love? Is it about standing up to Big Pharma? Is it about everyday acts of kindness like rescuing sex slaves from transnational terrorists? Is about an otherwise interesting, horrifying backstory about a character drowning for eternity being reduced to sequel bait? I don’t know… maybe.

SUMMARY & RECOMMENDATION: Broad, generic, and lacking any identifiable style besides a few intriguing comments on immortality, Gina Prince-Bythewood’s The Old Guard wastes considerable money on action scenes that don’t seem to interest her and much time and energy on characters that don’t interest me. Supporting castmembers are flatlines, while the story’s pacing is choked by filler and on-the-nose dialogue fit for The Walking Dead (2010-2021).

— However… Charlize Theron brings conviction and swagger to this otherwise lifeless cast; I appreciated the gory finishing moves.

—> Though The Old Guard is NOT RECOMMENDED, it does make me better appreciate the streamlined, purebred genre experiences that were Netflix’s Extraction, Wu Jing’s Wolf Warrior 2 (2017), and fellow Theron-vehicle, Atomic Blonde (2017), despite their faults.

? If you fear “a cage and torture for all eternity” and are also more or less invincible, why not just fight like hell constantly every moment of your capture?