‘The Avengers’ (2012): When Joss Whedon Pulled Off the Impossible

I have never been a big Joss Whedon fan, never having cared much for his television series Buffy the Vampire Slayer (1997-2003), Angel (1999-2004), and Firefly (2002). When the Gods of Marvel and Disney announced the leader, director, and writer of the superhero team-up of a lifetime would be the icon of fangirls and metrosexual nerds the world over, I had my doubts. Most of Whedon’s prior fame had been in writing and television work, and while much of that work had been impressive, much of it hasn’t aged well either. His feature-film work has also been a mixed bag. I feared that perhaps Joss had bitten off more than he could chew in this massively hyped, massive in scale, massive in scope, huge gamble by Marvel Studios and Disney. I could not have been more mistaken.

The Avengers tells a straightforward, simple story, allots appropriate screen-time to all of its important characters, and sticks to what it does best — namely, delivering over-the-top, bombastic set-pieces in characteristic Marvel fashion. If Gone with the Wind (1939) is the romantic epic to end all romantic epics, then The Avengers is the big, action-packed summer blockbuster to end all big, action-packed summer blockbusters. The Avengers is pure Hollywood escapism at its best and most unapologetic. It’s big, loud, and Goddamned proud of it. And it should be.

Whedon’s strength as a writer is his best weapon in tackling this mammoth project. One of the major concerns leading up to the film’s release was how four major superheroes, each big enough in personality to carry their own feature, could be fit into a single narrative with everyone getting the right amount of screen-time. How would Whedon be able to balance four protagonists in a single story, giving each hero time to shine and develop?

The method to the madness is never forgetting the humanity of Tony Stark/Iron Man (Robert Downey Jr.), Bruce Banner/Hulk (Mark Ruffalo), Thor (Chris Hemsworth), and Steve Rogers/Captain America (Chris Evans), and have the heart of the narrative be how their distinct personalities meet, clash, and in the end, work together. Whedon spares little time for cheesy one-liners, nor does he allot moments for any “We-must-work-together“-type speeches, as he is aware The Avengers’ larger-than-life premise will fulfill those emotions anyway; he sketches the team’s formation and growing pains as that of any human group made up of a variety of primadonnas. In short, Whedon keeps things simple and never writes the characters and their conflicts as if he’s intimidated by the concept of four superheroes combining forces to combat an epic antagonistic force… which is exactly what what the story is about.

The movie is divided into three distinct acts: The setup and Loki’s (Tom Hiddleston) introduction, the team’s meeting and initial quarrels, and the now trademark New York set-piece where The Avengers are forced to work together to defeat Loki’s army. The pacing of these three sections is tight. Whedon spends just the right amount of time on each section, and he choreographs the extended fireworks in New York so that the action feels exciting, but never exhausting.

Alan Silvestri’s bombastic, majestic score fits the bombastic, larger-than-life tone of the movie. The main theme that plays during the recognizable “hero shot” serves as a perfect summary of the film’s escapist emotion. To this day, it remains the lone Marvel Cinematic Universe musical theme that has stood the test of time. 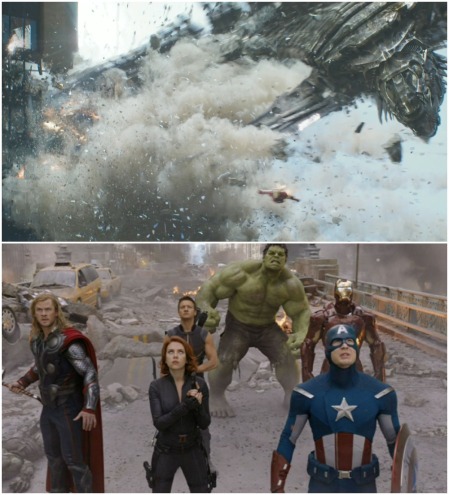 Top: Despite its extreme use of CGI, the action-packed finale in New York is breathtaking and its spectacle is magnificent. Bottom: The number of heavy-handed “we have to work as a team” monologues have been reduced to zero in this movie, thankfully.

The Avengers does get a few things wrong. It occasionally replaces some of the superheroes with CGI doubles that look painfully fake, and the opening scene is rather sluggish. The main weakness of the film is how the repetitive use of computer imagery can feel numbing by the end of the New York centerpiece; most of the film’s action features digital heroes shooting digital projectiles at digital enemies that explode in digital explosions into millions of digital smithereens. There’s a ton of digital FX. There is little in the way of grounded practical FX that feel like they have much weight or grit to them.

With that in mind, Whedon’s adventure is about comic book-escapism, a conflict that takes place in larger-than-life scenarios with heroes who possess abilities that could only exist in our imaginations. These four main superheroes, down to their very names (Iron Man, Thor, The Incredible Hulk, Captain America) are embodiments of mythological characteristics: A man of machinated construction and iron hide, the God of Thunder, a raging hulk who is a living personification of wrath, rage, and anger, and of course, the ultimate patriot of arguably the most patriotic nation on earth. While their written personalities are necessarily human, the titles and masks they wear are anything but complex. In light of this, the digital excess of The Avengers fits them just fine, even if it does feel truly over-the-top at times. The film’s methodical script and tight editing keep everything from spilling into excess. It’s just the right amount of digital overkill. You’d be hard-pressed to complain about overused special FX when the FX are this fun and well executed.

The Avengers is far from a perfect movie, but it does everything an action-packed blockbuster should, which is blow your socks off. Whedon, thankfully proving my doubt null and void, shows that not only can he write a human tale of larger-than-life heroes, but he can execute it as well. His direction translate the story to the silver screen in the bombastic way it was meant to be shown. From there, everything else falls into place, with Robert Downey Jr., Chris Evans, Chris Hemsworth, a surprisingly effective Mark Ruffalo, and the remainder of the cast down to Samuel L. Jackson’s Nick Fury, doing their jobs. The Avengers needed a framework and a leader to focus those hundreds of millions of dollars into a well-oiled machine of blockbuster success, and writer-director Joss Whedon did just that. It isn’t flawless, but it lived up to the hype, and you can’t ask for more than that.

SUMMARY & RECOMMENDATION: The Avengers lives or dies by its human story, and Joss Whedon pulls off the impossible by executing a narrative that never forgets its heroes’ humanity. The film is paced well so that the buildup to the New York centerpiece is as epic as we were all hoping it would be. Oh, and shawarma after.

— However… the opening scene feels slow. Some of the excessive CGI lacks visceral impact by the film’s end. None of the cast are giving Oscar-worthy performances in their placeholder characters.

? Whedon pulled it off. Can you believe it?