Posted by The Celtic Predator ⋅ May 10, 2017 ⋅ 6 Comments
Filed Under  Action, Fantasy-Adventure 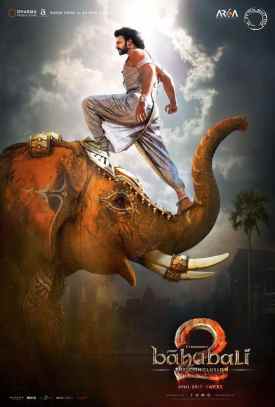 While I abhorred aspects of the original film’s digital FX, S.S. Rajamouli’s 2015 South Indian epic, Baahubali: The Beginning, was a breath of fresh air for blockbuster filmmaking. In a day and age when Hollywood has become infatuated with expanding as many slapdash “cinematic universes” as fast as they can, and Bollywood has tried (and failed) to take itself more seriously by Westernizing itself as quickly and tactlessly as possible, the dual language Telugu-Tamil fantasy film resorted to storytelling basics, likable characters, and imaginative, psychedelic Hindu imagery that would make acid-tripping 1960s rock ‘n roll artists proud. The film wasn’t without its major shortcomings, like I said, but it was undeniably effective filmmaking.

Fast forward to 2017 and the concluding installment’s release, and Baahubali: The Conclusion (henceforth, BC) has surpassed Aamir Khan and Rajkumar Hirani’s PK (2014) as the highest grossing Indian film of all time after less than two weeks at the box office. The film was even competitive at the US box office during a brief lull in the American summer lineup, landing between the debuts of The Fate of the Furious and Guardians of the Galaxy Vol. 2 (both 2017), peaking at the number three spot.

Top left to bottom left, clockwise: Prabhas locks eyes with alluring female lead Anushka Shetty in one of the film’s most memorable extreme close-ups, Prabhas later defends his betrothed before a royal court, Ramya Krishnan pronounces Mahendra Baahubali the new king, but only after his father is assassinated.

The profound weaknesses of the original return here for the sequel, including several laughable CGI set-pieces and distracting blue-screen composite shots, but so does the fun, swagger, and never-ending sense of humor of this extravagantly decorated throwback feature. Though BC is less song-and-dance dependent than Baahubali: The Beginning (henceforth, BB), BC compensates with stronger action sequences overall (its inconsistent special FX notwithstanding) and fantastic close-quarters-combat (CQC) cinematography. The sequel is also better paced than its counterpart, indulging in its detailed but necessary backstory while wrapping its present-day storyline with minimal embellishment.

Rajamouli and principle screenwriter K. V. Vijayendra Prasad understand how to take their story and characters seriously without taking themselves or their audience too seriously. Lead actor Prabhas’ titular dual roles have clear, straightforward motivation for all their actions, as do major supporting characters Ramya Krishnan as Queen Mother and female lead, Sathyaraj as the loyal manservant/king’s guard commander, Anushka Shetty as the principle love interest, and Rana Daggubati as the antagonist and usurper Bhallala Deva. This dynamite cast handle their larger-than-life, mythological roles and cornball dialogue with ease, embracing the fantastical angle of their characterizations and delivering both one-liners and gratuitous monologues with the stand-and-deliver routine of Hollywood’s Golden Age.

BC’s action cinematography, special FX, and imaginative visuals are both the film’s greatest strengths as well as its most glaring weaknesses. On the one hand, the stylized, speed-ramped CQC obviously inspired by Zack Snyder’s 300 (2007) is fast, fluid, and entertaining, as well as not without a sense of humor — for instance, an entire action scene is played as a joke about Prabhas’ infatuation with Shetty, where the former goes through the motions of intricate CQC choreography with a dumb, smitten look on his face after first laying eyes on the latter. These fights stay dramatic and brutal, however, when they need to be; blood squibs are used often throughout, as are dust, dirt, and grime, and various other minimalist practical FX.

These more hard-edged stylistic choices are contrasted with excessive, distracting CGI embellishments, including a laughable sequence where Prabhas leaps across the backs of stampeding digital cattle with flaming horns, as well as when Prabhas and his troops catapult themselves over siege towers with impromptu palm tree-trebuchets, only to land feet-first unscathed. Needless to say, these farcical stunts alternate between wink-wink jokes to the audience and painfully unintentional comedy at the expense of dramatic tension. Problems are compounded by how often Rajamouli acquiesces to blue screen backgrounds for basic dialogue scenes or shot-reverse shot techniques. While certain digital overreaches may be excused in extravagant action sequences given the epic scale of those scenes, lazy digital trickery during standard dramatic scenes is unacceptable. 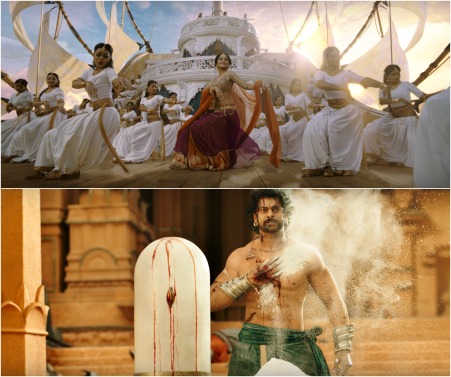 The end result is that BC’s spectacle, like BB before it, is almost as sloppy as it is entertaining. Much of the action is pulse-pounding stuff, but there’s hardly a sequence unbroken by unnecessary digital FX or painfully obvious composite backgrounds.

What compensates for the inconsistent FX — in addition to the solid characters and story — are the film’s pacing and, to a lesser extent than its predecessor, its soundtrack. BC is about 3/4 backstory and 1/4 actual conclusion to the events of the first film, and aside from some indulgence in the romantic subplot, the film covers tremendous narrative ground at considerable pace. The story almost never drags, and the transition from flashbacks to the present day coda is brisk and efficient.

While the soundtrack and musical numbers are not showcased as much as in the first installment, the songs are vibrant, diverse, and catchy. Rajamouli emphasizes the background score much more than dance sequences this time around; that being said, notable scenes are choreographed to the score without intricate dancing or lip synching, such as Baahubali’s opening coronation, in which he tames a rogue elephant. These sequences are arguably more impressive than the action sequences, given how gravity-defying stunts and surrealist imagery fit better in music videos than fight scenes.

Baahubali 2: The Conclusion is everything you’d want and expect from a sequel to the original, which includes all the corny, unnecessary bells and whistles that went along with that first movie. It doesn’t have as prominent a soundtrack to compensate for those over-the-top digital FX, but its reliable story, likable characters, and efficient screenwriting pick up the slack. If nothing else, the Baahubali saga has reminded the international film industry how much India’s filmmaking prowess extends beyond the Hindi-language stables of Mumbai, and shows its potential for action filmmaking despite how far Indian special FX as a whole have to evolve before they’re convincing. Either way, Baahubali 2 is a riot at the cinema, and one of the most enjoyable for-all-ages theatrical experiences I’ve had since the original Avengers (2012). Don’t miss it.

SUMMARY & RECOMMENDATION: Baahuabli 2: The Conclusion knows what it is and ain’t ashamed of it. It’s big, loud, proud entertainment that’s more cinematic than most Hollywood superhero films and less ridiculous than most Hindi romances thanks to violent action sequences, great characters, a classical story, and a rip-roaring soundtrack.

— However… most of those special FX remain as questionable as in The Beginning. Why #FlamingCows?

? So, does Prabhas playing both Amarendra Baahubali and Mahendra Baahubali symbolize the Hindu concept of reincarnation? I’m confused on that matter.

I love movies, music, video games, and big, scary creatures.
View all posts by The Celtic Predator »
« ‘Che’ (2008): A Revolutionary Life
‘The Mist’ (2007): The Greatest Adaptation of Stephen King’s Horror »