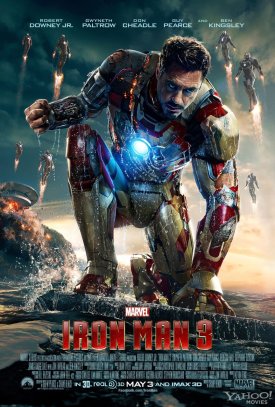 As the first post-Avengers (2012) Marvel-movie out of the gate, Iron Man 3 had a fair amount of pressure on its shoulders to show Marvel Studios still had ammunition after the big party. The powers that be predictably went with their most popular individual franchise to sustain that rhythm from 2012. I’m sure most were psyched at yet another turn by the venerable Robert Downey Jr. as the always charismatic, always witty Tony Stark. For me, a good deal of the novelty and excitement wore off after the underwhelming Iron Man 2 back in 2010. I agree that the first adventure of the iron-clad superman was impressive , but like many franchise originals these days, it did not, and still does not, warrant two sequels (and presumably more on the way). Whatever way you see it, though, the Marvel sequels will come, and not just for Tony Stark’s adventures, but for the entire Marvel Cinematic Universe. If I’ve grown impatient with the Iron Man movies, you can imagine my discomfort at the thought of having to sit through another couple waves of Thor (2011, 2013) sequels. Oh well, what can you do?

What the third Iron Man has going for it is how it feels different enough from the Avengers, avoiding the dizzying, CGI-intensive highs of your typical Marvel superhero experience — for the most part, anyway. It doesn’t try to outdo The Avengers in terms of jaw-dropping action set-pieces or excitement, instead going for a more subdued, low(er)-key adventure (I’m not going to say it is subtle, as this is still an Iron Man movie). The special FX-heavy set-pieces are few and far between, and none are meant to reach the heights of The Avengers‘ New York-centerpiece. This approach works for about half the film, and becomes boring by the latter half.

A nice surprise is the effective chemistry between Downey Jr. and a young Ty Simpkins, which adds some depth to the middle act of the movie. Another surprise is the lack of any substantial contribution by Don Cheadle’s War Machine/Iron Patriot. The man does nothing of significance throughout the whole film, and is essentially filler. This trend is prevalent throughout much of the movie — supporting characters that don’t serve much purpose or whose arcs don’t go anywhere. Rebecca Hall, Jon Favreau, Ben Kingsley, and others are little more than glorified filler. It’s not an entirely unforgivable misstep, as this is and always has been Tony Stark/Downey Jr.’s story, and the magnifying glass remains fixed on him. With that said, the sheer breadth of filler characters in this third Iron Man iteration is distracting and does little to tighten the snail’s pace at which the movie crawls. The only supporting character that feels partially fleshed out is Simpkin’s child-character.

The action scenes themselves feel rather tame, and regardless of whether or not that was intentional, it leaves the movie’s set-pieces lacking any visceral punch. The best scene in the whole movie is a clever sequence where Iron Man has to track down and pluck a dozen civilians in free-fall in a gloriously shot daylight-setting. This scene’s unorthodox approach takes the best advantage of the superhero’s skills and wacky presentation of physics. Sadly though, most of the other set-pieces feel either cartoony and over-the-top or hopelessly dull. The FX themselves are fine, but the action sequences as whole lack tension.

Finally, the villains: Everyone knows Marvel villains, with few exceptions, are underwhelming, particularly those used by the Marvel Cinematic Universe (MCU). Nowhere is that trend more true than here in Iron Man 3 (IM3). Though Osama bin Kingsley’s Mandarin is teased as an awesome, creative, threatening, and timely villain in the film’s marketing campaign, he turns out to be little more than a weak joke. The actual antagonist is Guy Pearce’s Aldrich Killian, which may be the actor’s worst outing to date. It’s difficult to put into words just how dumb IM 3’s villains are (including both Pearce and his nameless henchmen), so I won’t try beyond listing their stupid, nonsensical powers: Glowing, super-strength, exploding, regrowing limbs, and breathing fire. At least there’s no MacGuffin, right?

Chillin’ out nice and relaxin’ all cool…

In the end, Iron Man 3 is at the same time surprising, yet also predictable. The subdued tone for most of the movie fits well with the more grounded examination of Tony Stark’s strengths and character flaws, but the action scenes don’t seem to know where to go. There is this clashing, it seems, between the franchise’s natural excesses and this new, serious mood the film is trying to exude. More critically, the non-insignificant number of filler characters slows the story’s progression to a crawl. These two things do not make the film a complete disaster by any means, but the film as a whole feels unfinished and unfocused as a result.

There is nothing in this new movie that warranted a second Iron Man sequel beyond the obvious commercial incentives. On the other hand, Downey Jr.’s Tony Stark is as witty and entertaining and ever, Simpkins brings some much needed youthful exuberance to the series, and there are some clever scenes scattered throughout the storyline. As a generic action-spectacle, Iron Man 3 is a mixed bag, but at the same time, its story and plethora of characters are so forgettable and, at times, irritating in their meaninglessness, that as an actual movie it’s hard to recommend. I didn’t get the billion dollar-hype on this one.

SUMMARY & RECOMMENDATION: Iron Man 3 is more of the same from Marvel’s most bankable lead man, so depending on your tastes in movies, this film will either entertain or bore you. For my part, the supporting cast is underdeveloped and underused. Their lack of substance drags the film’s pacing considerably. The action set-pieces are standard-issue. The villains are arguably the lamest of the MCU yet.

–> However… the cast is great, the FX are top-notch, and it’s a hard film to hate on too much, if that makes any sense.

—> NOT RECOMMENDED*: IM3 will entertain general audiences, but will also frustrate comic book diehards and cinephiles who require more than flashy FX to kill two hours of their time.

? I actually miss the AC/DC/Black Sabbath soundtrack. I prefer it to “Generic Orchestral Action Movie-Music.”