Political satires are nothing new in film culture (see The Great Dictator [1940], The Candidate [1972], etc.), but their production values and ubiquity within Hollywood since the turn of the millennium, in particular following the rise of the Bush (George Walker) administration, have been notable, from Sacha Baron Cohen’s The Dictator (2012) to Oliver Stone’s W (2008) to Todd Philips’ War Dogs (2016) to Adam McKay’s The Big Short (2015) and Vice (2018). Their mixture of geopolitical drama, dry humor, and on-the-nose social commentary is a combination I find far more entertaining than, say, violent thrillers parodying the pedestrian lifestyles of white-collar office workers (e.g. The Belko Experiment [2016]); however, I’ll admit that preference is a function of personal taste. As often as these political satires fall on their face, though, I’m fine with their increasing prevalence given modern film comedy’s otherwise remarkable toothlessness and the modern 24-hour news cycle’s plethora of real-life absurdist material. 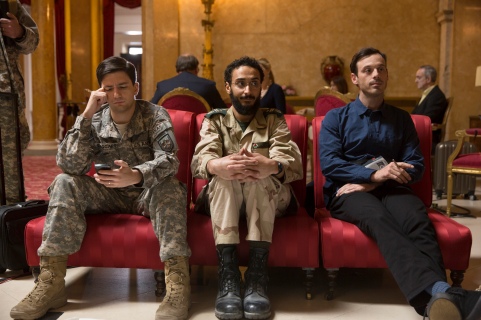 One of the latest examples of these studio-driven, comedy-drama (“dramady?”) hybrids concerning recent political events is David Michod’s War Machine, which dramatizes the nonfiction book, The Operators: The Wild and Terrifying Inside Story of America’s War in Afghanistan, by Michael Hastings. Specifically, the movie follows the United States’ operations within Afghanistan under the direction of General Stanley McChrystal (Brad Pitt as a thinly veiled “General Glen McMahon”) during the Obama administration. The film is a sort of farcical comedy, dramatic character study, and holistic retrospective of America’s longest war, an inconsistent genre-hybrid that feels part Vice and All the President’s Men (1976). Like The Belko Experiment, its most defining feature and greatest weakness concern its tonal instability, yet Michod’s capable direction and commitment to well-rounded characterizations elevate War Machine well above failure. It’s no success either, but rather a somewhat misguided, memorable look back at modern American foreign policy from a variety of cinematic perspectives.

For those of you unfamiliar with Michod, he’s an Australian filmmaker who rose to prominence with the crime drama, Animal Kingdom (2010), and then stumbled with the overindulgent Rover (2014), a dystopian road-movie set in the Outback. War Machine is a more entertaining, lighthearted change of pace for the rising auteur, though I remain concerned Animal Kingdom may be more a fluke than a feature of his filmmography.

War Machine (henceforth, WM), feels like an abridged miniseries given its long narrative timeline, globetrotting scale, and tonal whiplash. Despite its jarring transition from act to act, the film’s sheer emotional diversity smooths its pacing a la Endgame (2019), though without being three hours long. Its first half hour or so is a gut-busting comedy with great one-liners, effective visual humor, an aggressive soundtrack, and self-reflexive editing; its next hour calms down considerably, transforming into a sort of biopic about McChrystal’s Sisyphean task of navigating the politics of international warfare; the third and final half hour sheds almost all comedic elements and becomes a true war film, featuring an underwhelming portrayal of Operation Moshtarak that ends with McChrystal fired from his position. On the one hand, there is something to be said for a genre-hybrid forgoing standard narrative formula, borrowing elements from biopic filmmaking without being a slave to them; on the other hand, WM’s story feels incomplete despite having a distinct beginning, middle, and end, and one can’t help feel its dramatic elements often undercut its comedy, and vice versa. A seamless hybridization of genres this is not.

For his part, Brad Pitt’s portrayal of General McChrystal is amusing without being mean-spirited. He is a complete, sympathetic character whose personal strengths and weaknesses Michod takes at face-value, while his supporting cast of Anthony Hayes, Emory Cohen, RJ Cyler, Topher Grace, Anthony Michael Hall, John Magaro, and Aymen Hamdouchi accentuate his arc with great chemistry. Pitt’s McChrystal feels reminiscent of a wannabe hero a la Don Quixote, an endearing yet critical portrayal of a powerful military leader whose blunt idealism is kneecapped again and again by geopolitical truths he refuses to acknowledge. To the film’s credit, Michod’s stylized editing and use of comedy helps Pitt’s protagonist avoid the pitfalls common to Oscar-nominated biopics (e.g. long-running times, bad pacing, a complete lack of narrative structure, boring supporting casts, etc.), and contributes to its memorable personality. The problem with all this is how so much of WM’s personality is tied to a tonal structure whose execution is highly suspect: The comedy is pretty good, the dramatic stuff is, for the most, great, while the actual sequences of warfare feel so displaced as to belong to a separate film.

Meet “General Glen McMahon” (aka Stanley McChrystal, as portrayed by Pitt): He’ll liberate the shit out of you.

David Michod’s screenwriting and directing talents are a big part of why this film doesn’t collapse, yet his role as both the film’s sole credited screenwriter and director, combined with the limited opportunity for studio interference (War Machine was produced by Brad Pitt’s Plan B Entertainment and distributed by Netflix), means he bears responsibility for the film’s shortcomings, as well. If nothing else, Michod has “succeeded” in creating a comprehensive yet confusing summary of how most Americans’ feel about their government’s longest armed conflict. That is a difficult task, much like how Kathryn Bigelow and Mark Boal summarized the collective consciousness of the United States from September 11th, 2001 to the death of Osama bin Laden in Zero Dark Thirty (2012). Granted, Bigelow and Boal made a much better, more cohesive movie than Michod, but like the war his Machine is about, constructing a three-act story from the quagmire in Afghanistan is anything but a straightforward task.

SUMMARY & RECOMMENDATION: David Michod’s third film is an intelligent yet frustrating satire of one of the greatest modern international controversies. Its tonal whiplash is so jarring as to feel like separate films from act to act, yet two of those three acts are executed with impressive cinematographic flair and visual humor. As for the film’s cast, Brad Pitt’s lead is an unforgettable Quixotic tragedy, and his entourage, bursting with personality.

—> ON THE FENCE: If you’re a fan of Michod’s work or if you have a special interest in US foreign policy, War Machine is smart and entertaining enough to earn your time. However, its shortcomings in both narrative structure and occasional pandering mean its appeal is limited outside a core audience.