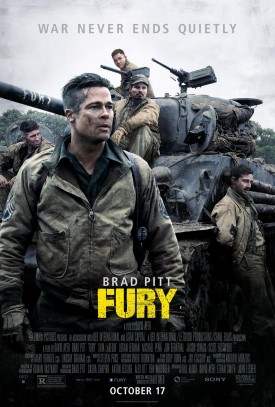 It’s been a long time since we’ve seen a good World War II movie. In this modern age of politically correct moral ambiguity, mysterious political intrigue and backstabbing, guerrilla warfare, and inflammatory military conflicts ripe with cultural division, we’ve been lost for a straightforward, honest war story. Kathryn Bigelow’s Academy Award-winning Hurt Locker (2008) came the closest to capturing the pure essence of cinematic warfare free from the confines of political agendas and suffocating cultural tension. One of the reasons The Hurt Locker was so refreshing was how most of the complaints it prompted were from servicemen and women noting various “flaws” or factual inaccuracies regarding military protocol. If those are the worst sins your war film is guilty of, then I consider that movie a success.

Left: Soldiers use tanks for cover as Allied American forces assault the Germans in the heart of enemy territory. Right: Shia LeBeouf searches for ammunition amidst enemy fire.

Fast forward six years later and we have Fury, written and directed by long-time screenwriter and burgeoning director David Ayer. The film is arguably Ayer’s most well received film yet, following his positively-reviewed End of Watch (2012). Given Ayer’s knack for good writing (he penned the script for Training Day [2001]), I’m interested to see what he does next. He has great confidence behind the camera, as his gorgeously-shot and riveting battle scenes in Fury demonstrate. What limits his latest movie is not any misplaced sense of American patriotism or star/executive-producer Brad Pitt’s supposed narcissism, nor the bang-bang, till-the-last-man, action-packed finale, but rather the inherent limitations of its archetypal screenplay. It’s not that the screenplay itself is bad — far from it, actually; the story is well paced and the characters are likable. Rather, the story feels predictable and the dialogue recycled from countless other, better war films (namely Steven Spielberg’s Saving Private Ryan [1998]) to which Fury will always be compared less favorably .

Where Fury succeeds is in its magnificent, pulse-pounding shootouts and nail-baiting tank battles, as well as weaving an intimate, recognizable tale around an archetypal band of war-brothers. Fury never reaches the heights of a Saving Private Ryan or Band of Brothers (2001), but it’s arguably as consistent as a WWII series like The Pacific (2010). Like The Pacific, Fury features awesome action, atmosphere, and mood while holding back on truly riveting characterizations or innovative insights into the nature of war. In recognition of the former, Fury looks, sounds, and feels like a born-and-bred war-beast. The battle scenes here are some of finest ever shot, and the way the bloody action is edited, paced, and constructed is mightily impressive.

As for the characters themselves, the crew of “the battle-hardened leader,” Brad Pitt, ethnic comic-relief Michael Pena, “eccentric religious weirdo” Shia LaBeouf, dimwitted and aggressive weirdo Jon Bernthal, and greenhorn rookie Logan Lerman are relatable in their own way, but limited by their stock mannerisms and dialogue. Whether one identifies them as stereotypes or archetypes depends on your level of cynicism when watching war films, but for my part I found them satisfactory, if somewhat underwhelming.

In the end, Fury is an effective, engaging war story that brings the noise when it comes to expert direction, sound editing, and action cinematography, while stumbling somewhat in creating engaging, memorable characters or a unique story. It’s unlikely that Ayer’s film will be remembered decades down the line in the annals of war cinema, but I would argue it probably should, and in any case, is a welcome throwback to the days of straightforward filmmaking. Besides, the only enemies that are more satisfying than Nazis are zombies and Nazi zombies. We should be encouraging these types of movies, as far as I’m concerned.

SUMMARY & RECOMMENDATION: Ayer knows warfare cinematography and demonstrates command throughout Fury with unsettling ease. The sheer power and thematic weight of the tanks, foot-soldiers, and weaponry on display grabs your attention and never lets go. The three-on-one Sherman v. Tiger tank battle 2/3 through the movie is an awesome highlight. While the characters are noticeably archetypal (or stereotypical), for his part, Brad Pitt displays his middle-aged leadership on a motley crew of likable losers. Pena, LaBeouf, Lerman, and Bernthal may not feel wholly unique, but they’re worth rooting for. The scene featuring them interacting with a German household midway through the film is a great showcase of Ayer’s screenwriting skill and the actors’ chemistry.

— However… the dialogue is the same repetitive, recycled war mumbo-jumbo we’ve heard a thousand times in countless, other, better war films. Nobody in our band of brothers grows beyond their archetype.

? Like Marlon Brando, Paul Newman, Tom Hanks, and countless other veteran actors before him, Pitt has now entered the stage in his career where he ages into roles of the leader, the mentor, and the father-figure. The days of him as a young, naive, up-and-coming detective in David Fincher’s Seven (1995) feel so recent. Everyone’s growing up….

? Speaking of Pitt’s resiliency, the man takes not one, not two, not three, but FOUR fucking bullets (and then two grenades) before biting it. Jesus.