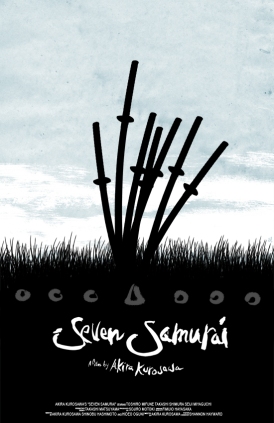 One of the most influential films ever made, Akira Kurosawa’s Seven Samurai is one of those rare pictures that has no glaring weaknesses. Performances are excellent across the board, pacing and cinematography are close to perfect, and its set-pieces are some of the most memorable in cinematic history. This film is widely regarded as the acclaimed director’s masterpiece, and one of the enduring hallmarks of Japanese cinema. 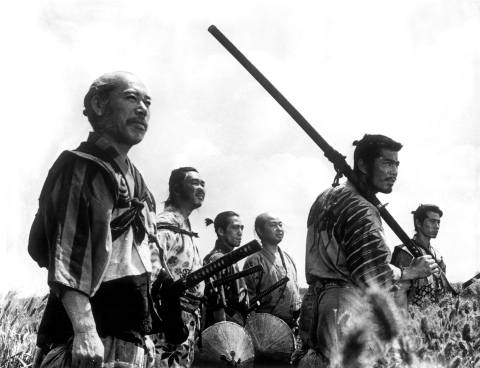 One of the strongest aspects of Samurai is its writing. Although the film starts slow and almost unbearably bleak, the characters of the townspeople and the ronin they hire to protect them from raiding bandits quickly become distinct and likable. Both the team of samurai and the villagers are equally important cogs in this narrative, and each group builds upon and develops in tandem with the other.

Our titular figures are essentially arms for hire (referred to as ronin, or samurai without masters), and because the poor villagers have nothing to offer them in payment other than room and board, how the townspeople convince the team of mercenaries to contribute so much time and energy for no fame or money is heartwarming to watch. The samurai who do answer the call of these pathetic villagers are those who take pity on them. The manner in which the villagers and the samurai discover each other and eventually decide to work together feels believable and natural. One by one, we are introduced to the seven samurai, all of whom have distinct personalities and are memorable in their own right. Most notable among them is the unofficial fearless leader of the band of misfits, Takashi Shimura as Kambei Shimada, who has done and seen it all in his many years as a battle-hardened warrior. He feels compassionate without coming across as overly sentimental. His mature, thoughtful presence aides in the recruiting of the remaining samurai, and the story builds around his character and his leadership of both the villagers and the six other swords for hire.

Even more critical than the samurai themselves, however, are the manners in which the samurai and townspeople grow in response to each other. As time passes, the villagers become more empowered as the samurai teach them how to fight and fortify their village against the antagonistic bandits. Conversely, the samurai start to soften and find comfort in a lifestyle that does not revolve solely around bloodshed. They find satisfaction and emotional fulfillment from venturing outside their comfort zone and helping those less fortunate. Takashi Shimura grows proud of both his fellow samurai and his new friends as they work together and learn from each other. Another critical moment of character development comes from longtime Kurosawa collaborator, Toshiro Mifune, whose unique past and perspective gives his character added depth, and who is in stark contrast to Shimura’s older, wiser role. It takes little to no effort to relate to this ensemble cast, because they are all well written characters who undergo meaningful development. This is ultimately why Seven Samurai succeeds.

Complementing this great set of heroes and underdogs is how the film is paced from start to finish. It’s difficult to excuse films that stretch beyond two hours without good reason, yet Samurai sports a mammoth running time of 207 minutes and feels like the perfect amount of adventure. You never feel bored, rushed, or confused the entire time. There are parts of bleakness, suffering, and haunting sadness, yes, but there are also of periods of comic relief, action-packed battles, and even joyous celebration. The film plots its action, dialogue, and moments of reflection that deepen the narrative to an extent few movies go to, and that is a large part of what makes this picture so special.

As for the action scenes, they are filmed almost entirely in wide-shot, with few stylized takes or slow-motion sequences. This highlights the chaotic nature of the battles, giving them a cinema-verite aesthetic. Given how many actors and stunt doubles fight on screen at any time, though, sometimes the set-pieces become almost too jumbled, and you wonder if Kurosawa could have diversified his editing or camera-placement to make the action scenes feel more coherent. It would be interesting to see a remake of this story filmed today with modern handheld technology, cranes, and SteadiCams. 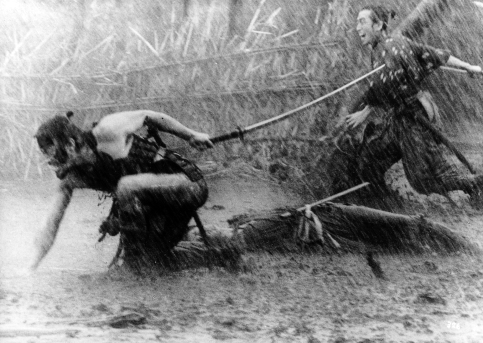 The final battle in which the samurai and the villagers engage with the raiding bandits in the middle of a storm.

Still, you are invested in every scene because you grow to care about all the characters, and thus Samurai’s climactic outcome. The pacing is extraordinary and makes the story feel like a true adventure. The ending in particular is satisfying and feels like an appropriate, if bittersweet, conclusion to the plot.

It’s amazing how colorful the characters and narrative are despite the film being shot in black-and-white. At 207 minutes, Seven Samurai is no small endeavor to sit through, but there are few films in the history of motion-pictures that can be this interesting for this long. You aren’t so much “sitting through” the movie as you are experiencing it. Samurai is arguably Akira Kurosawa’s masterpiece, the greatest film by one of the world’s greatest directors. If you are not the kind of person to watch foreign language films, particularly older, black-and-white ones that are especially long, this is the one you for which you should make an exception. It is serious without being melodramatic, and it is brutal and violent while remaining very human and sympathetic. It is one of cinema’s all-time classics, and one of the best ever to come out of Japan.

SUMMARY & RECOMMENDATION: Seven Samurai keeps its ambitious narrative chugging along with great characters, effective wide-angle cinematography, and well paced set-pieces. It’s a dark tale, yet the story never exploits its own seriousness for cheap melodramatic gain, earning each low and high point in its narrative, from hilarious visual gags to heartfelt character moments to passionate monologues to rousing battle-scenes. This film does it all.

— However… some action scenes could have used more diverse camerawork and framing.

? Even samurai need to lose their virginity some time.

I love movies, music, video games, and big, scary creatures.
View all posts by The Celtic Predator »
« ‘Saving Private Ryan’ (1998): The Best War Movie You Can Watch with Your Dad
‘Scarface’ (1983): That Gangster Movie Rappers Like »