Akira Kurosawa is one of the world’s most influential and widely recognized filmmakers. He’s arguably the most influential director to hail from Japan, and several of his films, namely Seven Samurai (1954) and Yojimbo (1961), are favorites of mine. Then there are films of his like Ran. Inspired by the parables of medieval Japanese warlord, Mori Motanari, and a loose re-imagining of William Shakespeare’s King Lear, Ran is considered Kurosawa’s last historical epic and one of his greatest achievements. Ran is interesting if further analyzed as an allegory for Kurosawa’s own career, which had long since waned by the 1970’s. Ran is as much about the ups and downs of its auteur’s fascinating career, and the twilight years of his life, as it is about failed kings and hereditary clans, military uprisings, and nihilistic nobility. It is a film about legacy. 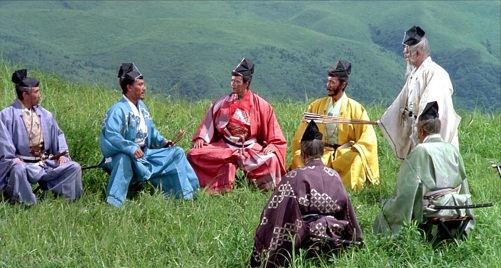 Some of the movie’s many impressive costumes.

Ran’s thematic breadth is its biggest strength as much as it is its most glaring weakness. Unlike some of Kurosawa’s other acclaimed epics, Ran wraps itself within its story’s captivating themes, moral dilemmas, and philosophy without ever maintaining a consistently engaging visual narrative. No one would characterize Kurosawa’s body of work as stylized by today’s standards, and I’ve often found his camerawork far too static to be terribly exciting, but the man is an expert at writing engaging, memorable characters and visualizing them in cinematic ways. Ran’s direction isn’t bad, but I rarely found the film to be visually interesting, let alone exciting, even during the film’s siege-centerpiece when entire buildings were set on fire. Most blockbusters before and since have been criticized as having plenty of style, but too little substance. Ran goes too far in the other direction: It’s all substance, but no style.

The plot conflicts center around an aging warlord named Hidetora (Tatsuya Nakadai), who in the beginning of the film, chooses to divide up his clan’s kingdom among his three sons (Akira Terao, Jinpachi Nezu, Daisuke Ryu) before he retires from day-to-day rule, while still retaining his official title as Lord. Long story short, two of his three sons decide to take matters into their own hands and each betray Hidetora on different occasions. The Lord’s one son (Daisuke Ryu) who doesn’t screw him over, is unable to mend matters between his fucked up family, and hordes of people end up shot, stabbed, and beheaded by the end of the film. Hidetora’s past actions as a cruel, ruthless, and bloodthirsty warlord come back to bite him in the ass as his world collapses around him; everyone he once ruled over either abandons or attempts to kill him. Overall, it’s an intriguing tale that contains many allusions to famous tragedies, including the aforementioned King Lear. The political drama in and of itself is entertaining enough, and several of the set-pieces, including the centerpiece-massacre that occurs midway through film, are quite impressive on a technical level.

Kurosawa emphasized throughout his career the importance of screenwriting over direction, how a screenplay was the foundation of every successful film. While today’s Hollywood studio system could stand to take a page or two out of his book, Ran represents the limits of that extreme point of view. Though the film is noted for its costume design, sets, and use of color, most dramatic scenes and action sequences are recorded with static shots at flat angles, with little camera movement throughout the entire movie, and no sense of tension or drama in any of the combat-oriented set-pieces. The music is also forgettable and does little to heighten the pace of the film’s obnoxious 160-minute running-time. To be rather blunt, the film is a dull bore at times.

Ran’s characterizations are much stronger than the film’s repetitive visuals. While it’s sometimes confusing exactly who is doing what to whom, or whose army is attacking whose fortress at any given time, the acting and backstories of major character are strong and provide everyone with reasonable motivation. The narrative remains intriguing based on its thematic breadth, grand scale, and strong characters, despite the often forgettable camerawork that captures them. While I’m not a fan of this film’s action-cinematography as a whole, several iconic images stand out as examples of Kurosawa’s trademark blocking and ensemble-staging; these include an earlier scene foreshadowing Hidetora’s family breaking apart (pictured above), or the money-shot of Hidetora’s concubines burning alive in his fortress while the shell-shocked warlord descends its steps (pictured below).

Then again, no amount of pretty shots in isolation can vitalize a cinematic style so plodding and patient that the film’s arduous 160-minutes feels like the length of Gone with the Wind (1939), minus the snappy dialogue and melodramatic romance, of course. Things aren’t helped matters by a lackluster supporting cast, who pail in comparison to Hidetora and his primary family. One character in particular, Kyoami (Shinnosuke “Peter” Ikehata), the court “fool,” is so insufferable and irritating that I wanted to tear my ears off.

Akira Kurosawa has built an impressive filmography of well written, well directed classics, but Ran just didn’t connect with me. There is a staggering difference in characterization and attention to detail between Ran and something like Seven Samurai (1954). If you’re an avid Kurosawa-fan, this is one of his more recent epics that cinephiles will know. As far as important landmarks in cinema go, though, I’d suggest passing on this unless you’ve got a humongous interest in Japanese cinema. Its set-pieces, sense of humor, and overall direction have not stood the test of time, in my opinion.

— However… while many characters are colorful and interesting, many are not, and some are even quite irritating. The pacing is slower than hell, the music is lacking, and the overall direction is bland.

—> ON THE FENCE: See it if you’re a hardcore Kurosawa or Japanese cinema fan, but there’s nothing here for casual film-goers nor much artistic innovation that warrants sitting through a nearly three-hour film.

? Remember the good old days when you could just decapitate people who fucked you over?

I love movies, music, video games, and big, scary creatures.
View all posts by The Celtic Predator »
« ‘The Social Network’ (2010): Because Trent Reznor and David Fincher Go Together
‘The Gods Must be Crazy’ (1980): Old World Slapstick »