‘Doctor Strange’ (2016): The Definition of Generic

After fourteen films across eight years, Walt Disney’s Marvel Cinematic Universe has established significant, identifiable trends that stretch across its corporate domination and worldwide brand recognition. Certain films are better than others, of course, and certain filmmakers (e.g. Joss Whedon, Anthony and Joe Russo) have maintained a more auteur stance than most, but all things considered, the house-owned Marvel movies are more similar than they are different. That recurring, once innovative production schedule of a “shared filmic universe” is the tie that binds them, and determines whether certain audiences are reliable fans or not.

I am not a fan of the Marvel Cinematic Universe (MCU), and at this point, after 16 years of mainstream comic book-movie congestion (remember X-Men [2000]?), am no longer interested in any major label superhero title that isn’t Batman or R-rated. As such, I continue to predict the pop culture reception and Tomatometer of each new MCU or DC Extended Universe (DCEU) installment with increasing disinterest, assuming this latest Doctor Strange would release with terrific yet overused digital FX, a well cast lead (Benedict Cumberbatch), an underwhelming supporting cast, a forgettable, one-off villain (Mads Mikkelsen), forced humor and lame quips, an inflated RottenTomatoes score between 76-88% (it’s currently at 91%), and easily gross a profit (it’s grossed over $634 million at the international box office after seven weeks).

Quite frankly, I don’t think these MCU films could get more predictable if they tried. Marvel’s entire strategy for world domination hinges on riding the line of blockbuster filmmaking, reliable screenwriting, and playing it safe. Minus a positive (The Winter Soldier [2014]) or negative (The Incredible Hulk [2008], Thor [2011]) aberration here or there, it’s hard to hate on or love the MCU unless you’re a die-hard Marvel comic book fan or snobbish, arthouse, anti-comic book hipster. From their impervious lead casting and meat-and-potatoes scripts to their generic orchestral soundtracks and color grading, most everything about the franchise emits this subtle yet unkillable feeling of inoffensive blandness.

On the one hand, this means you have to work hard to articulate exactly why your aunt and uncle and 10 year-old cousins shouldn’t bother spending $50 to see Thor 2 (2013) on a family night out, but on the other hand, the repetitive boredom of this shit becomes grating for those of us who don’t live and die on superhero origin-story formula. My halfhearted defense of Batman v Superman: Dawn of Justice (2016) was that that film was many things (e.g. violent, dark, depressing, moody, brooding, etc.), but the last thing it was, in my mind, was boring. I can’t say the same for Iron Man 2 (2010), nor Doctor Strange. 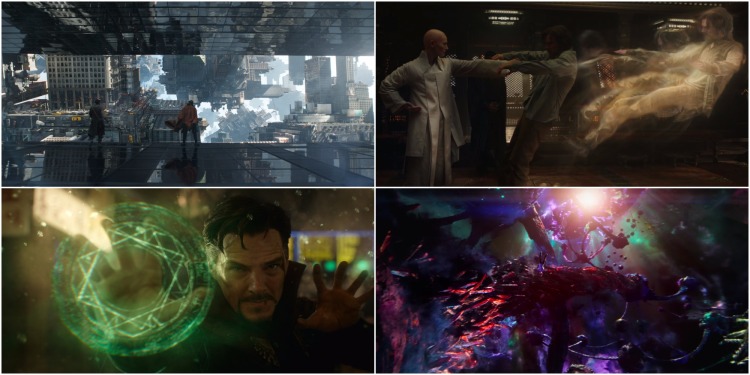 Doctor Strange: Unleash the power of shapes and colors!

Doctor Strange is MCU genericity incarnate. Few times throughout the film did I feel unimpressed by a set-piece or irritated by a lackluster performance, but frequently did I feel underwhelmed at the whole affair and, to be blunt, rather bored. Doctor Strange’s digital FX and psychedelic imagery are beautiful, but they’re thrown haphazardly into the film seemingly at random, with poor pacing and no buildup. The film’s opening scene is perhaps the flattest I’ve seen in a blockbuster this year, and it reveals the story’s entire dynamic world, magical powers, and lore right up front, robbing the later portions of their excitement. As is typical with blockbusters nowadays, the largest set-pieces are edited so quickly and expand so rapidly that any suspension of disbelief is shattered and the action degrades into a cartoony farce. My favorite battles by far were Cumberbatch’s first fight within a New York mansion, where the FX were flaunted but stayed somewhat grounded, and the final confrontation with big bad Dormammu, which involves a humorous plot-device that does not involve the endless destruction of urban environments.

Other than those two noteworthy exceptions, however, Doctor Strange reminds me of Inception (2010) in a myriad of bland ways given both films’ unclear rules with regards to magic or reality and their unwillingness to build suspense for later set-pieces. The FX are great, sure, but as The Force Awakens (2015) and Fury Road (2015) reminded us last year, they are tempting to overuse and often pail in effectiveness to the simple grit and relatability of practical FX. Doctor Strange’s digital prowess is as impressive as it is empty.

In areas besides action and special FX, the movie is similarly inconsistent. Cumberbatch gives yet another fine performance and he has great chemistry with the versatile Tilda Swinton, but co-stars Chiwetel Ejiofor and Benedict Wong are flat-lines. Rachel McAdams is professional enough but largely superfluous to the plot, while Marvel reaches a new low with its level of forced humor and awkward quips. I cringed numerous times at each WiFi-joke or Beyonce-reference. Come on, guys.

In the end, the Marvel Cinematic Universe pattern continues, and the more the franchise changes, the more it stays the same. Doctor Strange survives on the strength of its lead actor and the quality of its FX, while dripping enough pop culture references and uppity remarks to satisfy the dim-witted, popcorn-eating masses. I still can’t come down too hard on it considering how serviceable nearly all of its elements are in isolation, but I would be lying if I said I had the slightest inclination to revisit the film ever again — much like most of the MCU. If you’re a fan of this type of material, no amount of contrarianism by yours truly is going to stop you, and yet if you identify as anyone other than the converted, there are a myriad of other wide-release films at your disposable, from Hacksaw Ridge (2016) to Arrival (2016), that are far more memorable.

SUMMARY & RECOMMENDATION: Doctor Strange rests on its franchise’s laurels, which at this point are too economically sound and artistically reliable to criticize. Its good lead, good (if misappropriated) FX, and questionable humor will no doubt satisfy most audiences who don’t think too hard about either comic books or filmmaking.

— However… the old saying, “if it ain’t broke, don’t fix it,” rings true here, but that saying doesn’t imply “greatness;” it merely implies function.