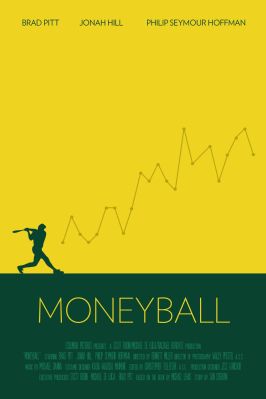 “It’s all about evaluating skills and putting a price on them. Thirty years ago, stockbrokers used to buy stock strictly by feel. Let’s put it this way: Anyone in the game with a 401(k) has a choice. They can choose a fund manager who manages their retirement by gut instinct, or one who chooses by research and analysis. I know which way I’d choose.” – Billy Beane [former general manager, now executive vice president and minority owner of the Oakland Athletics]

One of the first major essays I posted to this website was on the shift of the Hollywood industry away from the American New Wave (aka “New Hollywood“) movement of the 1960s-1970s, a period of time when the studio system was on the decline, broadcast color television challenged theatrical film entertainment, and many executives defaulted creative control of their productions to younger, film school-educated auteurs, also known as “the movie brats (e.g. Brian de Palma, Francis Ford Coppola, Martin Scorsese, Sam Peckinpah, Stanley Kubrick, Terrence Malick, etc.).” The cultural sensations and blockbuster prototypes that were Jaws (1975) and Star Wars (1977), directed by fellow movie brats George Lucas and Steven Spielberg, forever transformed the American film industry from the transgressive, self-reflexive filmmaking of the Counter Culture Era (e.g. 2001: A Space Odyssey [1968], The Wild Bunch [1969], The Godfather [1972], American Graffiti [1973], Taxi Driver [1976]) into the monomythic blockbuster machine it remains more or less to this day. 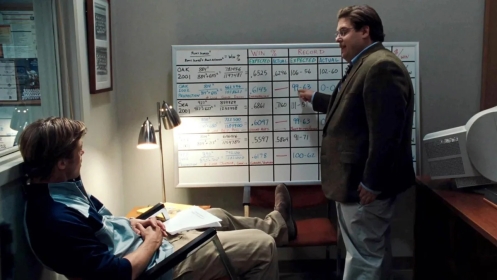 Why don’t you walk me through the board… Hill explains the mathematics of baseball player value to Pitt.

A shorthand, somewhat reductive method to summarize this key philosophical transition in mainstream American cinema is that the major Hollywood studios reverted to their Golden Age (1910-1960s) dominance whereby films were producer-driven, studio executives maintained an iron grip over production details and limited their directors’ creative freedom, and studios realized the financial importance of film advertising. Films that followed in the path of Star Wars encouraged audiences to “use the Force” or to “feel, not think.”

All this is a roundabout introduction to our discussion of Bennett Miller’s Moneyball, a mid-budgeted (~$50 million) dramatization of the 2003 nonfiction book of the same name by Michael Lewis, which chronicles the Oakland Athletics‘ (A’s) watershed 2002 season that saw the first major adoption of sabermetrics (i.e. baseball statistics) into player scouting, team building, and player performance analysis at the professional level. The film’s overarching theme is the importance of empiricism and intellectual strategy in running an organization, how main characters Billy Beane (Brad Pitt at his most subtle) and Peter Brand (Jonah Hill, a fictionalized amalgamation of Paul DePodesta and his various assistants) successfully transform the organizational mindset of a massive business community by questioning decades of entrenched tradition. See the Hollywood parallels yet?

Though American filmmaking never deviated from the blockbuster mindset that Spielberg and Lucas established, its magnetic concentration of capital and money has attracted and sometimes allowed for that 1970s “New Hollywood” mindset to shine through. The venerable American auteur and independent filmmaker darling, Steven Soderbergh, was attached to adapt Moneyball as a sort of weird, experimental hybrid-documentary that combined live interviews with professional actors reenacting true events alongside actual baseball players and coaches as late as mid 2009; these ambitious plans led to artistic clashes with then Sony Pictures chairwoman Amy Pascal and Soderbergh’s eventual departure from the project, which transformed into its final state with a rewritten script credited in equal parts to Steven Zaillian and Aaron Sorkin and directed by Bennett Miller.

Though the 2011 Oscar-nominated Moneyball is no doubt a good deal different than the avant-garde project Soderbergh envisioned, it remains an identifiable Zailian, Sorkin, and Miller-vehicle (see also: Capote [2005], Foxcatcher [2014]), not to mention a Brad Pitt production, as much as it is a wide-release Sony Pictures film with a sizeable price tag. The movie feels like an intellectual drama about self-worth more than a typical “sports movie” and retains much of the cinematographic “fly-on-a-wall” aesthetics of an investigative documentary, a style that comedy filmmaker Adam McKay would later replicate with such dramedies as The Big Short (2015), Vice (2018), and Don’t Look Up (2021). What this final version of Moneyball has that Soderbergh’s may have lacked is a relatable human heart, which integrates emotional music, powerful montage sequences, and Miller’s unparalleled acting direction (the man has directed six actors to Oscar nominations, including both Pitt and Hill in this film).

With respect to its quasi-documentarian approach, much of the movie’s natural dialogue and effective chemistry aides Wally Pfister’s cinematography, itself dominated by longer lenses and quick cuts that follow the rhythm of Sorkin’s confrontational, snarky writing. This visual style makes occasional slower, more dramatic sequences like Hill’s monologue to Pitt about player value, involving voiceovers, a montage of extreme close-ups of Hill’s data analysis, and a powerful sampling of “The Mighty Rio Grande” by the band This Will Destroy You, stand apart as set-pieces in their own right

Put another way, Moneyball’s many strengths and subtle auteur focus emphasize the extent to which the intellectual, transgressive spirit of 1970s New Hollywood remains in modern Hollywood. Its financial and critical success challenge the conventional structure of sports dramas much in the way its narrative questions the established wisdom of major league baseball. These twin confrontations mirror one another within Moneyball, and are a major reason why the film remains one of my favorite sports films released in my lifetime. The movie argues that audiences should, at least part of the time, put aside gut instinct and use logic; think, don’t feel.

SUMMARY & RECOMMENDATION: A giant cinematic metaphor for change, Bennett Miller, Aaron Sorkin, Steve Zaillian, and Brad Pitt’s Moneyball demonstrates the intellectual strain of New Hollywood remains alive and defiant against the industry blockbuster landscape. It argues for dramatic, patient cinematic storytelling better than most Oscar-bait have before or since as evidenced by its influential performance and high-profile amongst its crew’s filmographies.