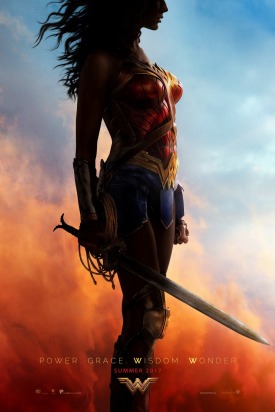 All Hollywood sexism aside, it’s a wonder (pun intended) no studio has produced a Wonder Woman adaptation during this modern renaissance of American comic book movies till this year. Wonder Woman’s mysterious absence, as well as Superman’s (the original superhero) limited exposure from 1988 through 2012 may hint at Warner Bros./DC’s lack of mainstream appeal beyond Batman, a lack of character depth most fans are unwilling to admit. Needless to say, this is not a problem for Marvel, given their plethora of endearing characters (e.g. the X-Men) beyond their own Marvel Cinematic Universe (2008, henceforth, MCU).

The third branch of DC’s “holy trinity” is here at last, though, after several rough starts by Warner Bros. to get their DC Extended Universe franchise off the ground critically and financially. Given the overwhelming response from critics and a $200 million worldwide opening, it looks as if this competition of franchise juggernauts may be just getting started. 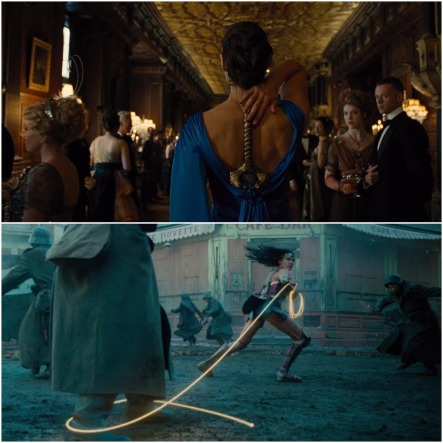 Diana Prince (Gal Gadot) can be both subtle (top) and over-the-top (bottom).

Wonder Woman succeeds as both a standard-issue superhero blockbuster and as a coming-of-age origin story because of its strong characterizations and screenplay courtesy of writer Allan Heinberg, Patty Jenkins’ emotional period-aesthetics and direction, and Gal Gadot and Chris Pine’s memorable lead performances. The action sequences are of little consequence to the overall story and our attachment to the principle cast; while some sequences are good (e.g. the trench warfare and French village shootout about midway through the film) and others are not so good (e.g. the cliched CGI shit-fest between Gadot and main antagonist David Thewlis in the finale), they’re more icing on the narrative cake than meaningful progression of the story or internalization of the characters. Fury Road (2015) this is not.

But that’s OK, because few action or action-orientated movies approach the same area code as George Miller’s post-apocalyptic masterpiece, and thematically speaking, Wonder Woman is a much different beast. Unlike most superhero origin stories, Wonder Woman embraces the coming-of-age formula of its immature heroine and emphasizes her maturation as the entire point of the movie, its emotional core. There is no haphazard coda or elongated subplot that shoves in a half-baked antagonist after the primary origin story concludes, such as in movies like The Amazing Spider-Man (2012), Thor (2011), or even Batman Begins (2005).

What sells Diana Prince’s (Gadot) development is a combination of Jenkins’ emotional direction and an effective lead performance from Gadot. Color me surprised by the former Israeli model, but I was one of the few audience members not sold on her clunky line delivery in Dawn of Justice (2016); I even scoffed at her casting upon learning she almost rebuffed her agent for originally suggesting the part because she wasn’t confident in her English-speaking abilities. Whether it’s a combination of her learned language skills, Jenkins’ acting direction, or other factors, Gadot fits the fish-out-of-water main character like a glove. Her comedic culture clash moments are a riot, and her chemistry with a charismatic Chris Pine have real heart.

To that end, Jenkins’ earthy, grungy depiction of the horrors of war and excellent dramatic staging portray a memorable period-setting far more convincing than anything in The First Avenger (2011). Perhaps some of this aesthetic appeal can be attributed to the tonal and visual contrasts between the primary London and Western Front settings of the later acts and Diana’s island home, Themyscira, of the first. The southern Italian location-photography of the latter, combined with Amazonian fantasy culture and combat-training montages, have an almost 1970s cornball feel to them, but little of the ubiquitous blue-screen composite shots used in similar films like Thor. The film’s transition to the grim, complicated World War I setting feels natural from both a thematic and character development perspective.

As mentioned above, Jenkins’ action direction and use of music aren’t critical to either Gadot’s arc nor her relationship with her costars. I enjoyed the trench battle and subsequent shootout, which is prominent in Wonder Woman’s marketing, but it and the film’s lesser action sequences are sugar coated toppings to the film’s character moments. One could argue Jenkins’ liberal use of Zack Snyder-esque slow-motion feels dated at this point, though its choreography is impressive. I appreciate how Jenkins’ limits the scale of her final set-piece, in which Gadot takes on principle bad guy Thewlis and Pine and company blow up a chemical weapons facility; it’s just an airstrip blowing up instead of an entire city; still, the over-the-top, unimaginative digital FX stand in stark contrast to the grounded feel of previous action sequences and the tone of the rest of the story.

That being said, the heart of the story, Gadot’s development and her connection with Pine, are as rock solid as the titular character’s abdominal muscles. Pine’s final acts of bravery are a real knockout amidst the superfluous CGI of the film’s climax, and end the story on a powerful note. I give Warner Bros. credit for sticking with this memorable, quasi non-formulaic ending, as well as closing the movie within its own self-contained narrative.

Chris Pine is brought before a council of Amazons (left) after being rescued by Gal Gadot on the beaches of Themyscira (right).

All things considered, Wonder Woman is a critical victory for Warner Bros. and the DCEU, and is the franchise’s best entry yet. It’s more emotional than most MCU installments, but doesn’t feel the need to drown in genre-bending angst to convey its themes or characterizations. In a supposed “Golden Age of Superhero Movies” where features are either mass produced as part of a corporate brand network (i.e. the MCU) or forced to subvert the entire subgenre (e.g. The Dark Knight [2008], Deadpool [2016], Logan [2017]), it’s nice to see a summer blockbuster embrace traditionalist formula with heart. With terrific leading performances from Gal Gadot and Chris Pine, as well as versatile direction from Patty Jenkins, Wonder Woman brings the DC cinematic label roaring back with a vengeance.

SUMMARY & RECOMMENDATION: Patty Jenkins’ debut in superhero filmmaking takes advantage of an effective screenplay by Allan Heinberg, portraying a visually diverse, emotionally resonant character-driven story that doesn’t break conventions so much as perfects existing blockbuster formula. Leads Gal Gadot and Chris Pine make for one of the better superhero couples of the past few years, with great chemistry, amusing dialogue, and a bittersweet relationship.

— However… Wonder Woman’s action sequences are inconsistent, alternating from “kinda cool” to “generic and forgettable.” The CGI showdown at the end doesn’t jibe with the rest of the film’s grounded combat and semi-realistic tone. The film is long in the tooth at 141 minutes.

? Why do the German officers speak English to each other instead of, you know, German?