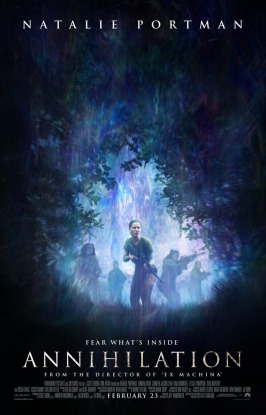 Alex Garland has become a type of patron saint among science-fiction and hardcore genre fans with his screenwriting and/or producing credits for films like Danny Boyle’s 28 Days Later (2002) and Sunshine (2007), as well as ghost-directing the critically acclaimed, yet financial failure that was Dredd (2012). Fast forward to present times and two official directorial credits to his name, Garland’s artistic star continues to rise, all while furthering a pattern of his visionary projects being either underappreciated (e.g. Ex Machina [2015]) or outright bombing at the box office (e.g. today’s subject, Annihilation).

I am no die-hard fan of the writer-producer-director, a talented and versatile genre filmmaker though he may be, unlike many of my cinephile peers, given how I understand the lack of appeal of his work to mainstream audiences. His works are lauded as near perfect on most occasions, from Sunshine, which I found obtuse and generic, to 2015’s Ex Machina, which I found repetitive, predictable, and overrated. This puts me at odds with my history of championing independent genre films, including my appreciation for biopunk aesthetics and adult-oriented science-fiction action.

Top: Members of a scientific research team exploring the Shimmer, a mysterious paranormal region in northern Florida, examine the twisted remains of a previous military expedition. Bottom: Natalie Portman tries not to engage with a mutated bear.

Perhaps my complicated affection for Garland’s work is indicative of my ability to remain objective in analyzing film regardless of personal taste, or I am able to straddle the due respect Garland’s ambition earns from sci-fi fans as well as the narrow appeal of much of his work outside the genre cinephile base. I like to think I can sympathize, if not empathize with both camps, thereby connecting the man’s critical and fan acclaim with his filmography’s dearth of mainstream awards or box office success.

For what it is worth — and this should be worth much to his loyal fan base — Garland continues to find work in the industry and has navigated the leap from writer-producer to full fledged auteur director better than most (e.g. David S. Goyer, Mark Steven Johnson, Frank Miller, Alex Kurtzman, etc.). Whether Garland will attain the career heights of a Frank Darabont, Joss Whedon, or Shane Black is anyone’s guess, but he’s far beyond the average Hollywood schmuck who pines the desperate cliche, “… but what I really want to do is direct!“

In any case, Garland’s latest critical and fan darling/box office flop, Annihilation, is a psychedelic mood piece for those who like their science-fiction in the aforementioned biopunk style, as well as flush with abstract symbolism a la 2001: A Space Odyssey (1968). Though these visual styles may not sound complementary on paper, the Alien franchise (1979, 1986, 1992, 1997, 2012, 2017), arguably the most famous biopunk film series, proved long ago these seemingly opposite thematic concepts can be executed together to great effect. Adding to the Alien(s) undertones are its quasi-military tropes and affection for brief, but memorable sci-fi action. Given all these attributes, one should expect a genre film enthusiast, biopunk lover, and Alien-fan such as myself would love this.

Did I? The answer is no, but not without a guarded recommendation, let alone a detailed explanation. After two films under his complete control (three, if one counts Dredd), one can draw firm conclusions about Garland’s strengths and weaknesses as a filmmaker. The man seems to struggle with pacing and casual dialogue, or banter if you will, given the lethargic pace of Annihilation’s first act as well as sections of Dredd and the entirety of Ex Machina. As per the latter criticism, Garland’s dialogue works when spoken by impeccable actors (e.g. Oscar Isaac, Domhnall Gleeson) or with regards to short, utilitarian lines that move the plot (e.g. Karl Urban’s titular Dredd), but falters with underwritten villains or side characters (e.g. Lena Headey, Wood Harris in Dredd).

The fact that all principle characters in Annihilation are (A) not likable or memorable, and (B) saddled with awkward, robotic dialogue is a major handicap of this film, and gives me flashbacks to my outlier ambivalence to Ex Machina’s critical acclaim. These films look tailor made for me on their surface, yet I keep finding ways to “nitpick” them to death…

That being said, considerable strengths Annihilation has over Ex Machina (EM) are its visual diversity, well executed action sequences, and a strong ending. While I enjoyed Garland’s use of framing and minimalist set design in EM, Annihilation takes advantage of its trippy, psychedelic special FX to establish a killer tone that sells the entire movie. The film’s memorable color scheme in daytime sequences and foreboding low-key lighting at night maintain an unyielding tension from start to finish, punctuating the film’s occasional but powerful violence and gore. Regarding that violence, Annihilation benefits from both practical and digital FX to illustrate potent body horror, brief but ferocious action, and unforgettable production design. Even the sets of this movie feel violent.

The film’s ending closes its narrative, themes, and characters on a strong note, and elevates the entire story. Its conclusion nails that narrative sweet spot, at least for me, whereby the principle characters achieve some measure of closure and the viewer can understand what’s going on, while thematic ambiguity remains as to whether which opposing forces “triumphed” over the other. In other words, Annihilation ends on an intriguing yet straightforward note; one understands the gist of the narrative without that narrative being either condescending or confusing.

Portman examines the dentition of a mutated alligator.

Alex Garland’s latest work has me feeling better about the auteur’s long-term prospects, despite how his films continue to escape mainstream acceptance on the one hand, but avoid even constructive criticism from his passionate fans on the other hand. Whether Garland will grow into the next Frank Darabont or Ridley Scott remains to be seen, but his dedication to intelligent science-fiction with a hard edge is admirable, not to mention supported by considerable talent at the typewriter and growing skill behind the camera. Should he diversify his dialogue and improve his casting choices, Garland may yet become an unstoppable force like his latest film’s indomitable antagonist. I wager the odds are promising.

SUMMARY & RECOMMENDATION: Annihilation is neither purebred biopunk horror a la Alien (1979) nor abstract science-fiction as in Moon (2009), but a thematic midpoint of both styles merged with psychedelic imagery and an absorbing diegesis. The film is best appreciated as an introspective fever dream in the vein of classical David Cronenberg or John Carpenter, rather than a memorable character study or contemplation of the human condition.

— However… the cast struggles with mundane dialogue, forgettable banter, and tedious backstories. Most characters act like robotic zombies before, during, and after their arcs, making their alleged development difficult to follow or empathize. Annihilation is story-driven sci-fi, not character driven, so beware of that.

? Are white phosphorous munitions not illegal in modern combat?