How Long Should a Cinematic Narrative Be?

I struggle to recall an action movie better paced than the elegant Fury Road (2015), a film so streamlined and whose story, so buttery smooth, even its exposition is tight and succinct.

When reviewing movies, television shows, mini-series, etc., I am conscientious of the fact I repeat several criticisms across many projects. Feature-length films in particular (~1.5-2.5 hours, on average), I feel, struggle with the “right” amount of storytelling to fit into a “proper” running time; while exceptions of long, purposefully meandering films like Gone with the Wind (1939) to The Irishman (2019) exist, which can viewed in chunks like a two or three-part miniseries, most feature films made for both the big screen and contemporary streaming platforms are designed to be watched in one sitting. That “limitation” of the feature-length narrative is both my favorite attribute of the format and also the format’s toughest hurdle for most filmmakers. Deciding how long to write one’s story is integral to both the artistic process and the budgetary restraints of film production in ways that don’t compute for other elongated storytelling media, such as literature or even theatre. It is a limitation I endorse because a 1.5-2.5 hour run-time challenges filmmakers to accentuate their narratives, eliminate superfluous narrative fat, and discourages haphazard pacing. Visual stories are the opposite of literature in terms of narrative verbosity — the latter is built to embrace it while the former is strongest at its leanest.

Few people have the patience to sit still and watch pre-recorded images on a screen for much longer than two hours, which is how that format originated. With the rise of streaming platforms, however, the increasing prevalence of high production-value mini or “limited series” (e.g. The Haunting of Hill House [2018], The Green Frontier [2019], etc.) and shorter (8-13 episodes/season), 2-3 season long-format television (e.g. The Punisher [2017, 2019], The Witcher [2019-) may challenge the dominance of the feature-length movie. The implications for narrative pacing across a wider range of run-time formats are unknown, though one immediate result is that filmmakers have a bigger, yet not limitless sandbox in which to tell a broader range of cinematic stories.

What defines the ideal length of a given narrative, I argue, is not so much production logistics nor filmmaker ego so much as the optimal storytelling rhythm of that narrative, or its pacing. Pacing refers to the emotional peaks and valleys in a story, the method in which excitement or drama is distributed throughout its characters, settings, conflicts, and transitions in between those elements. What constitutes “drama” or “excitement” varies from movie to movie and genre to genre, yet viewers intuitively recognize when a film is easing them into a diegesis (typically a film’s prologue or opening act) or accelerating toward a climatic centerpiece. 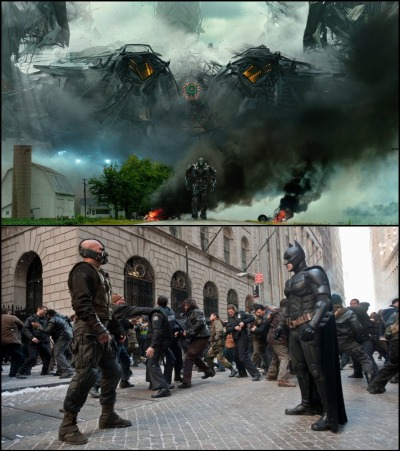 Two examples of bad pacing in popular blockbusters — Top: Age of Extinction (2014) is the longest in the Transformers franchise at 165 minutes, and also one of the most insufferable. It is a showcase of Hollywood overindulgence, with too many characters, longwinded set-pieces, and too much dialogue. Bottom: Overindulgent, but in a different way, Christopher Nolan’s penchant for exorbitant screenwriting is on full display in The Dark Knight Rises (2012), a film that “moves slow for two hours, then randomly zooms through three months of time without telling the audience.”

Editors may argue that great pacing is akin to great special FX, in that the best FX are seamless and unnoticeable to most audiences. My stance on pacing is different, because in my experience most viewers tune out or nod off when a film moves at a snail’s pace, or grow exhausted when a movie sprints from set-piece to set-piece. Audiences, whether cinephile or general, engage filmmaking the way people exercise — too little challenge or physical activity and they grow disinterested, while overdoing intense exercise results in rapid burnout. Audiences experience emotional fatigue the same way they experience physical fatigue. This means that not only is narrative pacing on-screen a real, tangible thing, but it is also a functional attribute of filmmaking to which viewers respond in real-time. Absorbing a film’s pace is an active, not passive process.

Now, what constitutes optimal pacing in a given narrative on film depends, in turn, on that narrative’s method of production. The optimal pacing for the average comedy film is different than your typical thriller, while the emotional roller coaster of genre formulas built around physical, dynamic set-pieces like action scenes or song-and-dance numbers (i.e. action films and film musicals, respectively) is more comparable. Complicating matters further is the aforementioned diversity of narrative scope in filmmaking, from self-contained features to theatrical “super franchises” (e.g. Star Wars [1977–2019], The Fast and the Furious [2000-], etc.) to miniseries to long-format television with multi-season story arcs. If we are to draw rough analogies between cinematic and literary storytelling, the cinematic formats noted above would align as follows:

What I mean to recognize with this essay, I think, is that many tested, established guidelines exist for pacing narrative formula on film, but few hard rules. A given screenplay or specialist auteur may conceptualize a feature that discards the most traditional elements of its parent genre; a customized series format may bend the limitations of formula to its will so long as its overarching format matches its story’s diegetic context. Filmmaking, like any artistic medium, is malleable to the extent that artists are creative, so deducing a mathematical formula for idealized cinematic storytelling rhythm is a fool’s errand.

Likened to a television version of a Dickensian novel, The Wire (2002-2008) told a visual story about the city of Baltimore, with each season describing a specific theme of its culture (e.g. crime, labor, politics, public education, the press, etc.).

However, the lack of unquestioned filmmaking commandments with regards to emotional pacing do not imply constraints on filmmaking’s emotional rhythm are a myth, or that pacing of film structure itself does not exist. Viewer’s immediate absorption of film content and the inherent flow of narrative filmmaking are real, tangible attributes of the medium, be it across two hours in a theatre or two hundred hours at home. Filmmakers must respect those emotional limitations whatever their project and its format, lest they unwittingly — or perhaps cruelly — exhaust and bore their intended viewers into an untimely grave.

Put another way, one may compare cinema to hip-hop: One can appreciate the rhymes, syntax, and delivery of the rap, but without purposeful, active modulation of the beat, it’s little more than a capella poetry. A film’s audience, like that of a musical concert, must bob and weave with the rhythm the artist conducts; in other words, the pacing of a movie is yet another extension of how filmmaking is a function of content execution (i.e. style), not necessarily of content (i.e. substance) itself.

I love movies, music, video games, and big, scary creatures.
View all posts by The Celtic Predator »
« ‘Marriage Story’ & ‘Little Women’ (2019): A Romantic Double-Review
‘The Gentlemen’ (2019): The Return of the English Crime Comedy »

13 thoughts on “How Long Should a Cinematic Narrative Be?”