First previewed on the second season of the popular Netflix series, Drew Goddard’s Daredevil (2015, 2016, 2018), Steve Lightfoot’s The Punisher was the third (… or fourth, depending on how you count) live-action adaptation of the bloodthirsty Marvel anti-hero of the same name. It was also part of the early wave of original or semi-original series produced by Netflix that helped the burgeoning streaming service establish itself as the dominant web television platform of the 2010s. Other shows from that opening wave of Netflix programming include its first mega-hit, Orange is the New Black (2010-2019), as well as several other popular Marvel-adaptations, including the aforementioned Daredevil, Jessica Jones (2015, 2018, 2019), Luke Cage (2016, 2018), Iron Fist (2017-2018), and The Defenders (2017), the latter four of which have since been canceled in the prelude to Disney launching its own streaming platform, Disney+. Netflix broke the mold with this opening salvo of ambitious, screenwriter-led television properties, which offered a darker, edgier, more mature take on Marvel’s lesser known sidestream properties compared to the now ubiquitous Marvel Cinematic Universe (MCU, 2008-present). Now that competing streaming services have risen to challenge Netflix’s iron grip on the streaming market, it’s worth reflecting on the appeal of some of the earliest “Netflix original” properties that helped change the landscape of modern television. 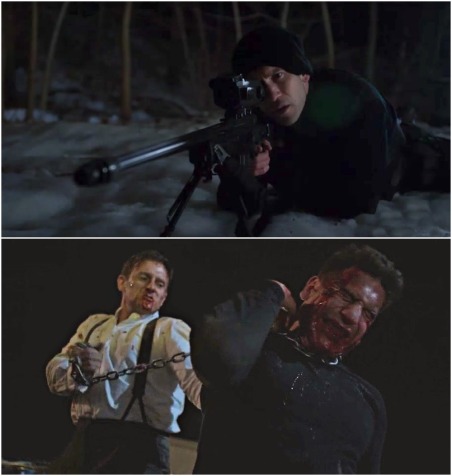 Top: One batch, two batch… penny and a dime. Jon Bernthal is The Punisher. Bottom: Josh Stewart (left) stars as John Pilgrim, also known as The Mennonite in the comics, and one of the few bright spots of Season 2.

It’s no secret I find most superheros dull, unappealing protagonists; when I reach the end of a superhero-movie where our lead character must face a “hard choice,” I know there is no hard choice to be made because superheros always do the right thing; there’s no suspense. Therefore, the MCU and its theatrical competitors are of little interest to me outside their trendiness and impressive production values. Netflix’s critically acclaimed, popular adaptations of Marvel’s anti-hero properties scratched my desire for morally ambiguous vigilantes more than most superhero blockbusters, but my initial reaction to these streaming trailblazers is as mixed as Zack Snyder’s controversial DCEU adaptations.

Examining the Netflix-Marvel co-production most aligned to my natural tastes (re: horrific, bloody, pervasive violence dealt by glorified villains), The Punisher, both the strengths and glaring weaknesses of this vigilante-centric television wave become apparent. These shows are based upon a predefined artistic vision (in the case of The Punisher, Steve Lightfoot’s), they portray cinematic violence honestly, their principle villains are strong, and they base their cinematography around dramatic dialogue, hand-to-hand-combat, and thematic ambiguity rather than gratuitous special FX or lame quips. On the other hand, their 10-13 episode seasons are bloated with narrative filler, their supporting characters are inconsistent, and their storylines are unfocused. Is The Punisher’s 2-season, 26-episode arc, for example, worth it?

Let us start with the elements The Punisher gets right: Beyond its strong main cast (Jon Bernthal as the titular lead, Ebon Moss-Bachrach as David Lieberman/Micro, Ben Barnes as Billy Russo/Jigsaw, Amber Rose Revah as Dinah Madani, Paul Schulze as William Rawlins/Agent Orange, etc.), The Punisher is a wonderful showcase of diverse action sequences, suspenseful heists, and stealthy hit-jobs that reference everything from classic film noir to Black Hawk Down (2001) to the Splinter Cell (2002-2013) videogames. Complicated though its first season’s government conspiracy-plot may be, the show’s premise provided Marvel’s ultimate anarchist motivation to tear down the system and wreak havoc by necessity.

In addition, cinematographers Petr Hlinomaz, William Coleman, Manuel Billeter, and Francis Spieldenner make great use of the New York city skyline in Season 1 and rural backdrops in upstate New York in Season 2 to portray a neo-noir diegesis with diverse lighting, tone, and camera movement. The Punisher is a great-looking show that feels well above its budget, utilizing composed ensemble staging and immaculate noir set-design to emphasize dread and melancholy. The show’s hardcore violence feels morbid rather than glorified because of this distinct tone, more comparable to S. Craig Zahler’s modern grindhouse pictures (e.g. Bone Tomahawk [2015], Brawl in Cell Block 99 [2017], Dragged Across Concrete [2018]) than Quentini Tarantino’s over-the-top celebration of violence.

Now, let us analyze the bad: The Punisher, like other Netflix-Marvel shows, is overstuffed with forgettable supporting characters, pretentious dream sequences, meandering side plots, and all varieties of narrative fat. Aside from the aforementioned starring cast, supporting actors Deborah Ann Woll, Floriana Lima, Giorgia Whigham, Michael Nathanson, and others are either misused, miscast, or had roles that should’ve been excised, altogether. The Punisher wastes almost as much screentime on pointless recurring characters or single-episode guest-stars as The Walking Dead (2010-present), and its frequent nightmare flashbacks to the murder of Bernthal’s family are just as unnecessary. Worst of all is the show’s incoherent second and final season, which revives one of the principle villains from its first season, Ben Barnes’ Billy Russo, for no reason at all, featuring some of the most cringeworthy on-screen therapy sessions and temper-tantrums since Hayden Christensen in Attack of the Clones (2002). Making matters worse is the manner in which Barnes’ Season 2-redux is sandwiched with yet another political conspiracy plot that has nothing to do with him, meaning episodes flit back and forth between these two storylines that never cross-pollinate or build on one another.

Hardcore fans of these 2010s Netflix-Marvel shows are uninterested in criticisms that question the efficiency of their storytelling. The early 2000s feature-film renditions of these properties (e.g. Daredevil [2003], The Punisher [2004, 2008]) demonstrate how far we’ve come adapting graphic novels to the screen, yet certain bad filmmaking trends remain timeless. Daredevil, Jessica Jones, Luke Cage, The Iron Fist, and The Punisher are popular because (1) comic adaptations to screen in any format are in style and (2) they’re not as bland, safe, and self-censoring as most theatrical blockbusters, comic-based or otherwise. However, compared to the breathtaking ambition of HBO’s best (e.g. Game of Thrones [2011-2019], The Wire [2002-2008], The Sopranos [1999-2007]), or the storytelling efficiency and slick presentation of recent BBC hits (e.g. Sherlock [2010-2017], Peaky Blinders [2013-present]), this critical mass of “gritty, edgy,” low-budget superhero TV feels amateurish. Perhaps that’s a high-bar to compare a show like The Punisher, but I’ve argued before that heightened selectivity makes sense when choosing amongst 20-50 hour-long stories. I feel my initial reluctance to jump onto the bandwagon of Netflix’s first wave of original programming was mostly justified.

SUMMARY & RECOMMENDATION: Long-winded though it may be, The Punisher is a brutal, morally ambiguous analysis of cinematic violence, the American military-industrial complex, the allure of vigilantism, and so much more. The show’s commitment to tactical, efficient, blunt violence is in keeping with its tone and lead character, and outside its action sequences, the show is visually compelling and as stylized as any crime drama.

— However… did I mention The Punisher is long-winded? Continuing the trend of Netflix’s anti-hero dramas taking their sweet, sweet time, this two-season, 26-episode arc could’ve been told in as little as half that many hours; half a dozen recurring or guest characters are pointless, while numerous dialogue-driven scenes slow the show’s pacing to a crawl despite the cinematographers’ best efforts. The show’s entire second season is a mess, packing two unrelated storylines together a la X-Men 3 (2006) to diminishing results.

? Just look how far “Shane from The Walking Dead” has come in a few short years. Rub his head for good luck.

I love movies, music, video games, and big, scary creatures.
View all posts by The Celtic Predator »
« ‘Rambo II’ (1985): The Dumbass Sequel that Defined a Franchise
‘Bright’ (2017): The Most Inexplicable Movie on Netflix »