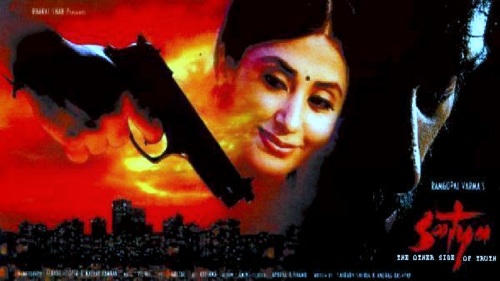 As it is in the American industrial cinemas of Hollywood, breaking industry molds is difficult in the Hindi blockbuster stables of India, where constant pressure to deliver massive profits and appeal to as many filmgoers as possible forces filmmakers into routine narrative formulas, cliched character arcs, and predictable conflicts. In general, most Bollywood pictures have to appeal to the accepted moral stature of the mainstream masses, teasing sexuality but never showing (or doing) too much, throwing in flavorful but tame action scenes for variety, and most importantly, featuring two young male and female leads that always fall in love in classic South Asian heterosexual unions — preferably with a stealing-the-bride-at-the-alter scene, if possible. 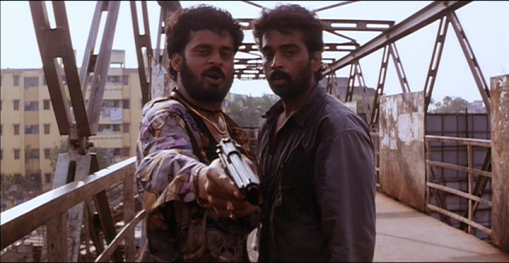 Along with Mani Ratnam’s Dil Se (1998) released that same year, Ram Gopal Varma’s Satya was one of the notable challengers to Hindi film conventions in the 1990s. It’s now famous dark tone, grim story, bloody violence, and outdoor location-photography set it apart from the air-brushed, clean-cut, sanitized look and feel of contemporary mainstream Bollywood flicks like Dilwale Dulhania Le Jayenge (1995) or Kuch Kuch Hota Hai (1998). Even compared to similarly dark crime dramas of old, such as classic Amitabh Bachchan movies like Sholay (1975) and Deewar (1975), Satya feels dirtier, its violent, pessimistic attitude penetrating every frame and bullet-tinged assassination. Grit and grime are prevalent in every indoor and outdoor location, utilizing both natural light and real-life dilapidated neighborhoods.

Satya’s tone and narrative would inspire Danny Boyle’s Slumdog Millionaire (2008) a decade a later, and it’s easy to see the resemblance. Both films follow the descent of characters into Mumbai’s criminal underworld and the violent conclusions that such gangster lifestyles lead to. Varma’s film features a blank-slate protagonist, the eponymous character played by actor J.D. Chakravarthy, who’s introduced as a newcomer to Mumbai and whose past is never mentioned or explained. After a series of unfortunate events upon arrival, he becomes caught within Mumbai’s current gang war and winds up in prison. There, Satya befriends a local member of the Mumbai mafia, Bhiku Mhatre (Manoj Bajpayee) and subsequently joins his gang upon their release.

What follows is standard gangster fare involving back-stabbings, hit jobs, and mildly unpredictable plot-twists as Satya tries to balance his rise through the Mumbai underworld, as well as avoid the long arm of the law, with trying to forge an honest relationship with a pretty girl outside the crime world. As far as gangster operas go, Satya’s crime story is rather formulaic and follows a number of the genre’s key conventions, but by comparison to its mother film industry and with respect to its dank, dark, bloody aesthetic, it stands out from the rest of the Hindi film landscape like a sore thumb. You can see where Boyle got his touch of gritty Mumbai backdrops and almost noir-like lighting, but you’ll revel in the irony that his Academy Award-dominating Millionaire achieved so much fame for taking inspiration from one of the most atypical Bollywood classics ever. The irony that the Varma’s film also lacks the jaw-dropping camerawork and kickass A.R. Rahman music of its British descendant won’t be lost on you either.

As it stands compared to the rest of gangster genre worldwide, Satya’s narrative ranks somewhere above average. The story is dramatic enough and its ending is suitably grim; the tale as a whole feels well paced for a nearly three-hour Hindi film, and doesn’t overstay its welcome. The large cast contains a wide range of likable or memorable characters as well as forgettable ones. Satya’s lead feels purposefully generic to act as a placeholder for the wayward, traveling soul who can only find social acceptance and financial security through criminal means. It’s an appropriate analogy given the narrative’s rich symbolism, but the character-driven aspects of the story suffer somewhat as a result. As a straightforward crime drama unto itself, I would put Satya on par with the screenwriting of Berandal (2014), which most people saw as second fiddle to the latter film’s action sequences, but was competent enough to sustain quality storytelling.

Urmila Matondkar plays your typical crime drama love-interest whose subplot shows promise before petering out by the film’s end without much payoff.

The major problems holding Satya back are its colorless protagonist, its unnecessary musical numbers, and its dull thud of an ending. The movie concludes in appropriately bloody fashion, but the disorganized execution of its final sequence ruins the climactic tension. The weakness of the disappointing ending stems from the lack of  relationship growth between Satya and his love interest, played by Urmila Matondkar. Their love arc isn’t without heart, but the whole affair feels unfinished and only partially fleshed by the time the story reaches its violent conclusion. The fact that this otherwise promising romance remains so abbreviated in the film’s closing shots is more of a letdown than a tragic punch to the gut that Varma clearly wanted it to be. To that end, Satya’s character may function well enough as a blank-slate, and Chakravarthy’s monotone performance may be forgivable, but the film’s shoehorned song numbers are the height of impotence.

In the end, Satya, one of the most unconventional Bollywood hits of the past twenty years, impresses despite being rather cliched when viewed from a broader, global context. Like Ratnam’s Dil Se, I give the film credit for branching out on its own (relative to its native film stable), taking the darker, moodier route from which most Hindi flicks steer clear; in comparison to Ratnam’s terrorist love-plot, I argue that Varma’s film succeeds enough on its own merits as an artistically worthwhile project. Like many of Hindi cinema’s “groundbreaking” trendsetters, I’m not as blown away as I’m sure most others were in the moment, but as far as darker sidestream Bollywood pictures go, it’s an entertaining ride that forgoes the tongue-in-cheek attitude of so many of its Hindi brethren, and takes itself seriously without falling apart. I only wish Rang de Basanti (2006) had done that…

SUMMARY & RECOMMENDATION: Varma’s distinctive’ noir-gangster aesthetic works well with the narrative’s mood and criminal action. Satya looks, feels, and sounds like it should.

— However… Satya’s narrative rarely wows given how much of its content has been either done to death or executed far better in countless other industries. The story stumbles in its final moments, with its romantic subplot ultimately being left on the cutting-room floor. The musical numbers are pointless.