While Tom Cruise may have fallen out of favor with the general public due to his weird, cultist advertising and general over-the-top off-screen personality, one thing that hasn’t gone by the wayside over these past years is the man’s ability to bolster the quality of films in which he stars. Say what you will about Cruise’s religious zealotry, the guy continues to give quality performances year after year, and his enthusiasm for lending his star persona to non-pre-established blockbuster franchises should be commended. The man tries his hardest to entertain us, and for his part, he rarely if ever fails.

Bill Paxton’s sardonic master sergeant brings a greenhorn Cruise down a notch after Cruise gets busted to private early in the film.

It’s a shame this latest Tom Cruise actioneer was let down by a ho-hum marketing campaign, because its good reviews and word-of-mouth are justified. This is an excellent movie and Cruise’s best blockbuster since the shockingly satisfying Mission Impossible reboot (Ghost Protocol [2011]) three years ago.

If you haven’t seen Edge of Tomorrow (EoT) yet, you’ve probably heard three things about it: (1) The movie uses a timeline reset/loop plot-device in combination with its sci-fi aliens-attacking-earth premise, (2) it’s like Groundhog Day (1993) meets Aliens (1986), and (3) it’s inspired by videogames. Those descriptions are accurate, as the film does combine the repetitive (but effective) humor of a Groundhog Day time-travel premise with the shoot-’em-up sci-fi action of a Starship Troopers (1997) or Aliens, and its central plot-device paired with its militaristic premise gives the film a videogame-like tone and story structure. Cruise himself feels like a gamer forced to beat a level over and over again, learning from past mistakes and formulating new strategies to beat his enemy.

Where as most film comparisons to videogames are code-descriptions for bad dialogue, one-dimensional characters, and mindless action (usually by film critics who’ve never touched a videogame in their life), this is the first case where a film’s narrative’s resemblance to a first-person shooter is, in fact, a compliment. The time-reset plot-device feels like we’re playing along with Cruise as he attempts his mission over and over again; as he learns to master his skills and strategic maneuvering, so do we. Most films based on videogames merely try to mimic the relentless action of their source material in a medium largely unsuited for it, but this film instead borrows videogame narrative structure to great effect. The way the screenplay paces its character’s learning curve adds satisfaction to the film’s conclusion, much the same way a gamer rejoices after finally beating the last and hardest level of his favorite shooter.

Needless to say, the humor in watching a man repeat living a single day and die in countless bizarre ways, ad infinitum, is memorable. Director Doug Liman uses montage sequences to highlight repetitiveness and the (lack of) passage of time for our hero. These wacky plays on sci-fi action make the film smarter than your average blockbuster, as it uses humor to bolster its message, its characters, and its narrative pace.

However, a large part of EoT’s success hinges on Cruise’s excellent lead performance. His character has a clear, substantial, and realistic arc that adds emotional depth to the story. His chemistry with the supporting cast is also great, as the film features a bravado onslaught of minor character quirks and one-liners reminiscent of Troopers and Aliens. Aliens alum and frequent James Cameron collaborator Bill Paxton himself shows up in a priceless performance as Cruise’s commanding officer.

One part of EoT argued as a positive in many reviews I’ve read is the female lead by Emily Blunt. I was never too taken with her character and found her to be a wannabe-imitation of the Ellen Ripley-heroine from Cameron’s 1986 masterpiece. She seems one dimensional to me and is left to spout generic tough-girl one-liners as she flies around with her Final Fantasy 7 (1997)-sword. She reminds me of Michelle Rodriguez in a bad way. The one redeeming aspect of her character is how her interactions with Cruise lift the latter character’s even higher, as the time-relapse gimmick allows Cruise to build on his past relationships with Blunt’s character while Blunt always rewinds back to square one. 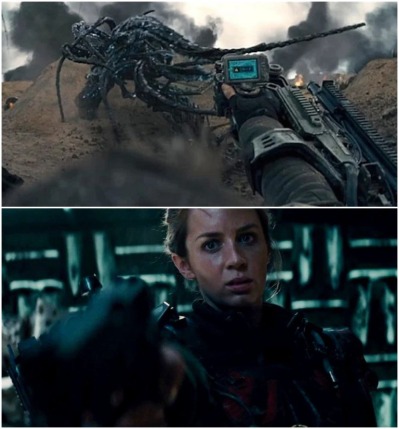 Top: Cruise battles the Alpha Mimic, an advanced version of the alien enemy, although he has trouble finding his gun’s safety… Bottom: When Cruise screws up in training, it’s time to start over.

I also have complaints with the artistic design of the science-fiction elements of the film. While the weapons on the much flaunted mech suits are cool, the overall bulky, awkward design of the armor makes our action heroes look cartoonish and at times downright goofy. The sloppy design of the alien enemies is even worse. Far removed from the ferocious xenomorphs or Troopers insectoid foes of old, Tomorrow’s tumbleweed antagonists look like metallic Flying Spaghetti Monsters more than anything else, and their lack of intimidation is disappointing given the film’s many action scenes.

Altogether, you could do much worse for Hollywood blockbusters this summer than this latest Tom Cruise vehicle. It’s far smarter than you’re average comic book-film, and it’s every bit as good as the popular Winter Soldier (2014), which has been the superhero standout of this year. This movie uses its central plot device well, Cruise plays another standout lead, and the film is well structured in the hands of veteran director Doug Liman and screenwriter Christopher McQuarrie. I wish the designs of the mech suits and the aliens were better than they are, and I remain baffled by Blunt’s popularity, but these are minor scuffs on the movie’s narrative prowess, effective characterizations, solid character growth, and smart sense of humor.

SUMMARY & RECOMMENDATION: Edge of Tomorrow’s narrative is highly effective, using its time travel “gimmick” at all the right moments and dialing back the repetitiveness when necessary. Liman’s use of montage and visual humor makes this film a few dozen IQ points above your average Hollywood actioneer, superhero or otherwise. Cruise does it again with yet another dependable lead performance. Most of his supporting cast is there to back him up.

— However… Emily Blunt is a poor woman’s impression of a Ripley, Vasquez, Sarah Conner, or other Cameron sci-fi heroines. Her toughness and screen presence are superficial at best, although it doesn’t help matters when she’s surrounded by silly-looking mech suits a far cry from Neill Blomkamp’s slick Elysium (2013) design. The aliens look dumb.

? Thank God for foreign markets; otherwise, Edge of Tomorrow would be dead in the water. Never thought I’d say that about a film…

Leave a Reply to Tim The Film Guy Cancel reply