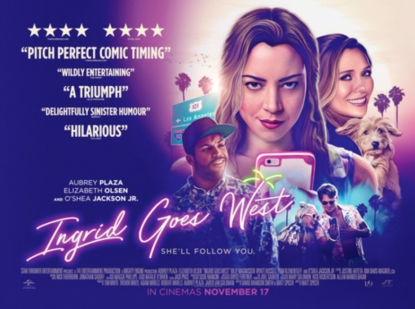 Social media gets a far worse rap than it deserves, in my opinion. Criticisms of it range from standard, “These damned kids and their stupid toys/technology” rants from old-timers to bizarre, self-serious diatribes on Instagram or Facebook oriented attention deficit disorders, to the very real dangers of political propaganda and cyberwarfare.

Thus far, film and television haven’t done a glorious job of analyzing themes of social media and related technology given the novelty of the phenomenon, as well as the inherent awkwardness of portraying digital interfaces (re: screens) in cinema. Only two major films to date have dealt with this modern phenomenon well, one by skirting around the technical details of social media by instead emphasizing the social contexts and underlying motivations of these platforms (The Social Network [2010]), and the other by dissecting our universal desire or instinct to connect with others, regardless of context or the actual means of communication (Her [2013]).

Matt Spicer’s Ingrid Goes West may be the third; it centers on the modern — yet not recent — dynamic of parasocial relationships, specifically through the lens of social media. Parasocial, or one-sided relationships (e.g. fan worship of celebrities, sports figures, political figures, or social media icons), are not exactly a new thing, but Ingrid Goes West (henceforth, IGW) analyzes how these often unhealthy relationships have become streamlined and even weaponized in the Internet Age. It does this against a further backdrop of mental instability, severe emotional disorder, and the classical tragic character, like a combination of Her and the vivacious Silver Linings Playbook (2012). It’s a wild and eclectic mix.

IGW’s protagonist, an empathetic yet sporadically unsettling Aubrey Plaza, is a disturbed, sad girl who starts the film by pepper spraying a bride and alleged unrequited friend in the face by not inviting her to the latter’s wedding. Things grow weirder from there.

IGW describes the creepy yet fascinating crime of stalking from the stalker’s perspective; once Plaza moves on from her previous parasocial relationship, she latches onto another social media personality in the form of Elizabeth Olsen, which sets the main plot in motion. Plaza’s various social maneuvers to track down, study, and penetrate Olsen’s sphere of influence never shy from those acts’ inexcusable criminality or predatory undertones, but at the same time never reduce Plaza to a comedic or psychopathic caricature. She remains simultaneously creepy and sympathetic, her actions inappropriate yet somehow relatable.

Much of this effective dynamic is due to Plaza’s great performance within a character that appears tailor made for her, as well as her fantastic chemistry with Olsen and supporting actors Wyatt Russell (Olsen’s downtrodden, sympathetic husband) and Billy Magnussen (Olsen’s mean-spirited and drug addled brother). These relationships are framed with great staging courtesy of Spicer and cinematographer Bryce Fortner. Visually, IGW is pulsating with energy, much of it due to spellbinding lighting setups in both day and nighttime scenes. The former take advantage of the intense southern California sunlight, emphasizing an almost paparazzi like flair to Plaza’s expressions, costumes, and movements; the latter feel reminiscent of film noir, set to the tune of young adult drama and partying a la Federico Fellini’s La Dolce Vita (1960). Regardless of the time of day, the movie is energetic, intense, and full of social pizzazz, an impressive result of disturbing yet believable chemistry between Plaza and company and Fortner’s visuals.

And yet, one could argue the heart of the film lies in the connection between Plaza and love interest O’Shea Jackson Jr. Jackson serves as Plaza’s landlord when Plaza first moves to Los Angeles in search of Olsen, little more than a convenient foil to Plaza’s endless lies and shallow deceit. Their relationship evolves by the second act, however, complicating both Plaza’s central goal of parasitizing Olsen’s fame, fortune, and social capital, as well as Plaza’s original feelings of social isolation. The depth of this relationship adds a critical layer to IGW’s themes of emotional dysfunction and media addiction, and complicates the story’s ending. 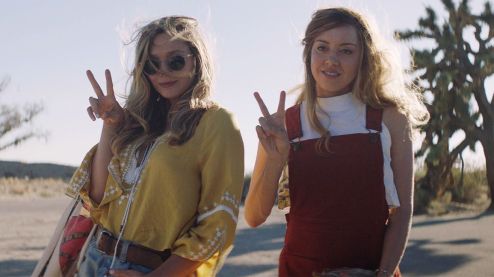 One final element to discuss is IGW’s depiction of Internet use and social media interfaces in general. As mentioned above, a major problem with mass communication depictions in cinema regard the difficulty of filming screen technology (i.e. watching other people watch screens within a screen) without feeling awkward, stilted, or boring. IGW skirts around this problem for the most part by portraying social media interfaces in full screen montages and using humorous voiceovers by the cast to read, literally word for word and emoticon for emoticon, media updates. While there are a few lackluster shot-reverse-shots of actors sitting and texting, hearing Elizabeth Olsen say, “Life is soooooo great right now. #Livelifetothefullest, smiley face,” with complete sincerity, never gets old.

Ingrid Goes West is neither a purebred laugh-out-loud comedy nor a dramatic punch to the gut, but equal parts both throughout, and director Matt Spicer maintains this delicate balancing act despite covering a difficult — and not readily cinematic — subject-matter. Much of the film’s success can be attributed to producer-star Aubrey Plaza’s realization as the ultimate crazy girl with heart and a #RestingBitchFace to match. Her immense range and wonderful chemistry with her costars would make for a great stage play even without Spicer and Bryce Fortner’s effective cinematography, which is a rare compliment coming from a videophile such as myself. In the end, this movie doesn’t make losers lovable so much as it humanizes them without overlooking their true failures, and that may be its most enduring strength.

SUMMARY & RECOMMENDATION: Matt Spicer’s eclectic, personable comedy-drama hybrid offers cinematic social commentary in spades while portraying diverse characters with various captivating flaws and memorable flavors. Aubrey Plaza is an unforgettable star till the final scene, and yet it’s her connection with O’Shea Jackson Jr. that may be the most uplifting part of the entire story. This movie is one big 😀

— However… some screen-on-screen action can’t be avoided entirely, it seems. Watching people text on film may never become truly cinematic.

? Fuck me, Bruce. Gotham needs you.