‘Silence’ (2016): The Most Drab, Depressing, and Overindulgent Film of Scorsese’s Career

Though Martin Scorsese is best known for his organized crime ballads (e.g. Goodfellas [1990], Casino [1995], The Departed [2006]) and otherwise violent psychological dramas (e.g. Taxi Driver [1976], Raging Bull [1980]), his body of work is ripe with religious overtones and spiritual contemplation from The Last Temptation of Christ (1988) to Kundun (1997), not unusual for a lifelong Roman Catholic and a man who once considered entering the clergy. 2016’s Silence, a passion-project of Scorsese that has been in various stages of development hell since the early 1990s, represents the fever-pitch of these religious insecurities, at times playing like the cinematic interpretations of a lifetime of spiritual pilgrimage.

Scorsese has described himself as a “lapsed Catholic” but also a traditional practicing Roman Catholic numerous times throughout his career, and these personal contradictions are on full display in Silence. In many ways, it feels like one of his most personal, intimate films to date. Unfortunately, much like Ben Affleck’s recent vanity project, Live By Night (2016), Scorsese’s overwhelming attachment to the material at hand seems to have overridden his usual restrained, artistic objectivity. Many of the Italian-American’s auteur projects flaunt charismatic excess (see The Wolf of Wall Street [2013]), but there is always clear directorial precision and tight editing in the best of these films, which both Silence and Live by Night lack. 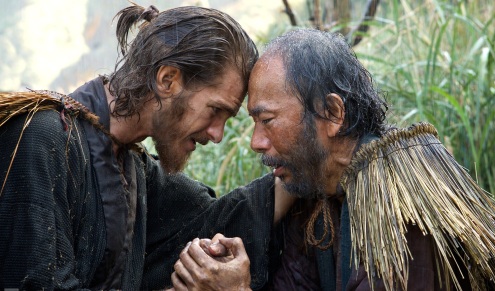 Andrew Garfield (left) comforts a Japanese Christian pauper as he prepares to leave for another village in search of his former mentor.

Martin Scorese’s latest picture feels nothing like the majority of his filmography, and not in a good way. Where as certain filmmakers may be reinvigorated by changing styles or attempting new genres of film, Scorsese has replaced his unique, American New Wave directorial style with a generic, bland, and depressing dramatic visual style in the vein of the worst Oscar-bait. Silence is not a pandering political feature, per se, but it otherwise fits the bill of a self-serious, grueling, poorly paced wannabe epic that drags on for 161 minutes, punishing its audience without purpose. It is perhaps my least favorite Scorsese film to date.

Silence is adapted from the Japanese novel of the same name by Shusaku Endo, a Japanese Christian who was born and studied in Tokyo, raised in Manchuria, and studied abroad in France. His literary works are famous for portraying an Asian Catholic perspective, having grown up a religious outsider in his native Japan and a racial “other” in Christian-dominated Europe. The story from which Scorsese built his film follows two 17th century Jesuit priests (Andrew Garfield and Adam Driver) based in Macau, who travel undercover to neighboring Japan to discover the whereabouts of their former mentor (Liam Neeson), who was rumored to have renounced his faith after being tortured. From there, a long, long journey of soul-searching, faith-testing, and good ole-fashioned physical torture ensues, making for one of this year’s least enjoyable theatrical experiences.

If you really (… and I mean, really) get off on this sort of religious, philosophical introspection, you may be able to overlook this movie’s gratuitous emotional warfare, depressing torture, and overbearing length. Silence does little to convert the uninitiated, and languishes in simplistic themes of colonialism and resilience of faith for nearly three God damned hours. Like most religious epics or similarly depressing sociopolitical character studies, my patience with Silence is tested most by its slow pace and immense length. I can withstand most portrayals of gratuitous violence or psychological torture, but Silence neither hones its screenplay nor provides enough interesting characters to sustain its drab, dreary treatise for such an “epic” format.

Certain aspects of the film I liked include Andrew Garfield’s committed lead performance, the excellent location photography (completed in Taiwan, not Japan), and commendable period set-design. Other than those elements, I found myself simply not caring about either Garfield’s protagonist or the high-minded religious themes Scorsese was conveying. The film’s cinematography is so static, bland, and forgettable that its final tracking shot during Garfield’s burial is the movie’s highlight, a far cry from the diverse, eclectic, and personal style of Scorsese’s filmography. I understand stylized slow-motion, freeze frames, and handheld long-takes might not fit most scenes in a story such as this, but Silence’s static tripod shots, mechanical camera pans, and snooze-worthy editing represent the antithesis of David Fincher’s utter command of identical cinematographic techniques. Scorsese attempts to convey a sense of cold distance, a photographic callousness that fits with the story’s treatise of Divine absence (re: silence) from the world, but this visual representation falls flat given its lack of comparison or contrast to any other setting besides the priest’s endless suffering in rural Japan. Combined with the film’s bleak subject-matter and long running-time (did I mention that, yet?), this vanilla style of cinematography grows punishing rather than revealing. 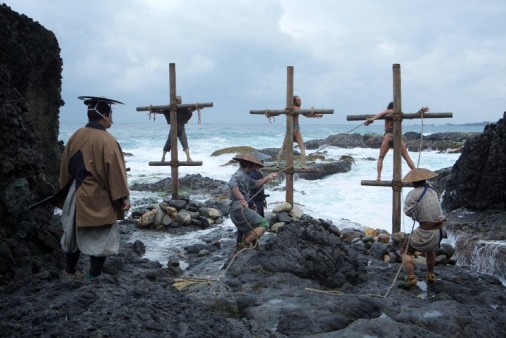 I have several other complaints, not the least of which concern Silence’s irritating supporting cast (Yosuke Kubozuka as the indecisive, cowardly Kichijiro is perhaps my most hated character of the year), but going into detail about them would be beside the point. My primary criticisms of Martin Scorsese’s decades-long passion-project are its incredible length, drab cinematography, and tiresome subject-matter, about which I could not give a shit by the end of my near three-hour trip to the cineplex. I am dumbfounded at the critical acclaim this film has received, with many professional reviewers placing it on their Top Ten-lists of 2016, though once again, given the source material, perhaps I shouldn’t be. I take no joy in articulating my disappointment about this latest film from one of my favorite directors, but at the same time, I cannot reinforce how let down I was by this experience. If not for the aforementioned Live by Night, Martin Scorsese’s Silence would unquestionably be my biggest letdown for 2016 in film.

SUMMARY & RECOMMENDATION: Silence is an arduous, unrewarding, and misguided religious drama that asks admirable, if unanswerable questions about culture and spirituality; neither the cinematic journey nor the destination is worth it for the bland visuals, forgettable cast, and misappropriated screenplay. I could not be more disappointed in this film.

— However… Andrew Garfield is dedicated as the oddly sympathetic main character of Silence. The film’s period details and production design are convincing. At the very least, Silence is not overtly manipulative with its story or themes.

I love movies, music, video games, and big, scary creatures.
View all posts by The Celtic Predator »
« ‘Goodfellas’ (1990): The *Other* Greatest Crime Drama of All Time
My Take on ‘The Walking Dead’ (2010-Present): Not a Review »

4 thoughts on “‘Silence’ (2016): The Most Drab, Depressing, and Overindulgent Film of Scorsese’s Career”