While Quentin Tarantino’s alternate-history World War II revenge-epic had existed in some form since 1998, the grandness of its of ambition and its writer’s cautious optimism kept it unproduced and hidden from the public eye until the late 2000’s. Tarantino turned out the equally grand and sublime two-part samurai film, Kill Bill (2003-2004), and directed the Deathproof part of the 2007 Grindhouse double-feature along with Robert Rodriguez, and then finally released his long awaited Nazi-killer in 2009. The results were glorious. Or glourious, as I should say…

Left: Waltz lays down a deal for Pitt and his Basterds. Right: Michael Fassbender, disguised as a Nazi officer, conspires with double-agent Diane Kruger.

Simply put, Inglourious Basterds is one of Tarantino’s most transgressive, off-kilter films while also remaining one of his most breathless and entertaining works amongst a career of innovative, groundbreaking crowdpleasers. The movie features no definitive main character (at least no singular heroic or anti-heroic protagonist in the traditional sense), is split across two entirely separate narratives that never meet until the final five minutes, and is filled to the brim with dialogue-heavy buildup, most of that being in French or German.

In any other director’s hands, this script would be a box office disaster. No main character, a disparate narrative structure, and loads of non-English exposition, and yet Tarantino turns this premise into one of the most dramatic, edge-of-your-seat historical thrillers ever made. That is good directing.

Much like David Fincher, Tarantino knows that dialogue is not inherently cinematic, but drama is. He stages each scene for maximum tension in every shot, littering every scene with subtle but effective clues to character motivations and hints at the brief but extreme explosions of violence to come. Truth be told, there is very little action in IB, though admittedly its few moments of carnage are through the roof in terms of intensity and viciousness. Though technically a war film (and an alternate history one, at that), IB feels more akin to a Martin Scorsese or Francis Coppola gangster picture; what makes those momentary murder-sprees so satisfying and impactful is the buildup, but not the rhythmic narrative pacing of an action film like, say, The Raid (2011); rather, IB builds tension through opposing character motivations, tensely paced and intricate dialogue, and the careful staging of each scenario.

Tarantino’s reputation by this time also afforded him the convenience of an all-star international cast, from Brad Pitt to Michael Fassbender to the now universally respected German star Christoph Waltz to smaller stars like Melanie Laurent, Diane Kruger, and Daniel Bruhl. Hell, even Mike Myers shows up for a memorable guest performance. In traditional Tarantino fashion, Quentin brings out the best in his whole cast and arms them with numerous one-liners, hilarious jokes, and articulate character development. 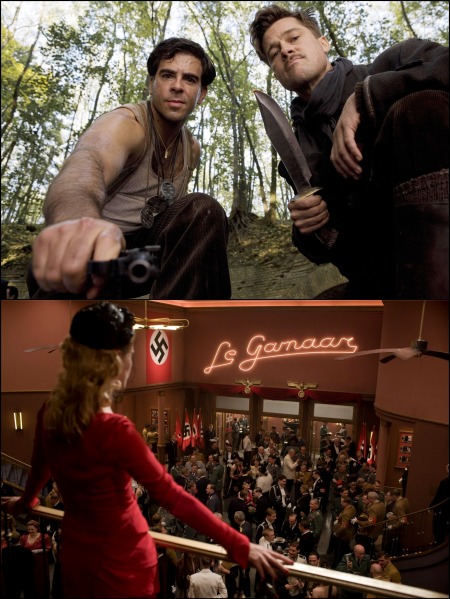 Top: You know how you get that good, Donny? Practice! Bottom: Melanie Laurent (foreground, left) looks over her German prey mingling in their cinematic death-trap.

The secret weapon among all these names is of course the no longer-so-secretive Christoph Waltz, who first broke into the American mainstream with his now famous portrayal of the SS Standartfuhrer, Hans Landa. The one element, the single character that binds all extraneous storylines of this movie together is not poster-boy Brad Pitt nor the classic Tarantino heroine hellbent on righteous vengeance, Melanie Laurent, but rather its villain. Waltz is a powerhouse as the multilingual Nazi monster and master military-strategist, a character who somehow manages to transition from calm, calculating villainy to charming social savant and back again. His dialogue includes English, French, German, and Italian vocabulary, and he brings his unforgettable, absurdist personality with maximum force in every language.

The remainder of the stellar “supporting” cast is led by Pitt and Laurent, leader of the titular Jewish-American special forces unit and guerrilla Jewish-French resistance fighter, respectively. The latter is a loaded pistol of feminine rage and passive-aggressive violence, a more subtle version of Uma Thurman’s Bride from Kill Bill, while Pitt demonstrates maximum screen presence in a role that’s allotted surprisingly limited screentime. Though Laurent’s character boasts the least humor and colorful personality of the cast, she unquestionably gives the most dramatic, tense performance through her character’s tactics of hiding in plain site. She’s a sheep disguised among wolves who figures a way to burn the wolves alive in their own liar. Pitt, on the other hand, is a nonstop macho-machine of hilarious caricature and endless one-liners, a man who displays a surprising amount of self-awareness for a figure so otherwise brash and distinctly patriotic Americana.

The final elements that tie this movie together are its overall narrative pacing and great soundtrack. Though IB is less than fifteen minutes shorter than Tarantino’s followup, Django Unchained (2012), it feels so much tighter and more efficient. IB is over 2.5 hours long but barely feels 2 hours. It’s soundtrack is also much less poppy and catchy than your standard Tarantino selection, though it saves its most memorable tune, David Bowie’s “Cat People,” for the film’s best setpiece. I’d argue this is Tarantino’s most effective soundscape besides Kill Bill.

All in all, Inglourious Basterds brings the noise in every single cinematic aspect, a superior film boasting great screenwriting, great acting, great music, and outstanding direction. It is, in many ways, Tarantino’s love-letter to the medium of film itself, as the endgame of his magnificent tale of revenge involves burning the Third Reich alive with the literal combustible power of nitrate film reels. It makes sense that Tarantino would pull out all the stops and show us how explosive (literally), film can be. How cool is that?

SUMMARY & RECOMMENDATION: Tarantino relies on exposition and staging to produce his drama, using violence and music as the exclamation points to his story rather than having them be the story unto themselves. He achieves this with maximum narrative impact and extreme emotional force, all through the visual power of his craft. Every character is treated with love and care, so much so that the most charismatic character in the film is an SS officer and even Daniel Bruhl’s misunderstood Nazi sniper becomes sympathetic. Like George Miller’s Mad Max: Fury Road (2015), Tarantino refuses to reduce any of his characters, however despicable, to caricatures. Except Brad Pitt, of course — who is awesome nonetheless.

— However… awesome as the film’s alternate conclusion may be, it tests the boundaries of incredulity for even the most dedicated film-lover.

? Actually, Werner, we’re all tickled to here you say that. Frankly, watchin’ Donny beat Nazis to death is the closest we ever get to goin’ to the movies.