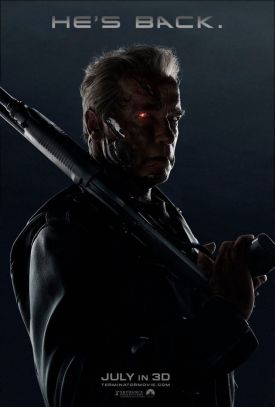 Well, at least the poster looks kinda cool, I guess?

This is a random, kneejerk-reaction post, so I’ll try to be brief. The other day, I decided for some masochistic reason to rewatch the original trailer for the upcoming remake/sequel/reboot/prequel, Terminator: Genisys (Q3, 2015).

My reaction to it the second time was roughly the same I had when I first watched the trailer: Sadness, confusion, and most of all, cynical laughter. Normally, I’m not one to automatically dismiss remakes as inevitably or even inherently bad things, but in this case I don’t see much reason for optimism.

Remember how pop music videos slowly become more and more sexually explicit and edgy, like with Britney Spears’ “Toxic” back in 2003? It was still crappy pop music for the most part, but the video was hot, teasing us with delicious shots of Spears’ sexy-ass body in diamonds and a skimpy stewardess outfit to die for. But then those music videos went from edgy, sexual teases to full on strip-shows like Rihanna’s “Pour it Up” (2012), Jennifer Lopez’s and Iggy Azalea’s “Booty” (2014), and Nicki Minaj’s “Anaconda” (2014). They show all the goods right up front for the full, excruciating 4-5 minutes and leave nothing to the imagination.

Similarly, major American movie studios are no longer even bothering with pretending to “reinvent” or “update” or “modernize” older classic titles. They know people will pay to see it, so why put any artistic effort into “remaking” it when they can literally just make the same movie over again, just rearranging bits and pieces here and there? For music videos, sex sells, so just give ’em a strip show and people will watch it. It’s the same with movies and  recycled brand recognition. Hollywood is literally recycling and diluting older films at this point. This “new” Terminator is not even a remake or a reboot. It’s a recycling and dilution. That’s all you can call it. Prove me wrong, Hollywood. I fucking dare you.

(Before you ask, yes, the film will be R-rated. The violence will have actual stakes and consequences.)

One could simply call the next Mad Max, The Fast and the Furious (2001-2015)-for-grownups. Or the Terminator Salvation (2009)-for-grownups. I take it back, maybe remakes aren’t dead after all…

Miller apparently designed the film from storyboard first as a single continuous chase, with little dialogue and an overwhelming emphasis on the visuals. He claims he wants the film to be understood in Japan without subtitles. That’s filmmaking.

“We [Tom Hardy and  I] f–kin’ went at it, yeah. And on other days, he and George [Miller, the director] went at it,” she reveals. “It was the isolation, and the fact that we were stuck in a rig for the entire shoot. We shot a war movie on a moving truck — there’s very little green screen. It was like a family road trip that just never went anywhere. We never got anywhere. We just drove. We drove into nothingness, and that was maddening sometimes.” — Charlize Theron, via Yahoo via Esquire

Also, George Miller claims 90% of the film’s effects were practical!

The more I hear about this film, the more excited I get. Even if we’re going on the sheer strength of the trailers alone, and MMFR has had three outstanding ones in a row, I’m gonna call it right now: Mad Max: Fury Road will be the best action film, and likely one of the best films, period, of 2015.