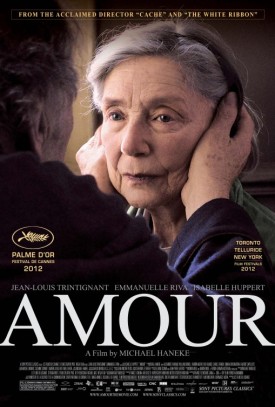 2012’s token French Best Picture-nominee, Amour, is vintage Oscar-bait. (Amour won Best Foreign Film and also received Oscar nominations for Best Director, Best Actress, and Best Original Screenplay). Amour is depressing, plainly shot, French, and a drama centered around a major character’s flaw that isn’t his or her fault. It’s almost everything the Academy loves. If only it had also been about Jews during the Holocaust, then it would have been sure to have won every award for which it was nominated. I guess having another French drama win Best Picture, Director, and Actor the year before (The Artist [2011]) didn’t help variety’s sake. Still, it garnered big nominations for which more deserving films (such as Zero Dark Thirty [2012]) got snubbed, so I don’t feel too sorry for it.

Amour is all about the little things and subtle character details. Die-hard action junkies need not apply.

On to the actual movie, though.

Amour is, to it’s credit, a relatable movie with relatable (if not necessarily likable), realistic characterizations within a regrettable stage-play structure. Almost the entire movie takes place in the one apartment where Emmanuelle Riva’s and Jean-Louis Trintignant’s characters live as retired married piano teachers. The main conflict centers around the physical malady that affects Riva’s character, in which she suffers a stroke that renders her body partially paralyzed, eventually degenerating her life and that of her husband’s into miserable handicapped monotony.

The best part of the film is the interwoven relationships between Riva, Trintignant, and their daughter (played by Isabelle Hupert), which plays out almost too realistically, so much so that you feel the physical stress of all the parties involved, from Riva’s growing frustration with her handicaps and Trintignant’s spiraling sanity and suffering in silence to Hupert’s visibly distraught behavior. As Riva’s situation worsens and family morale takes a deeper hit, everyone responds in their unique ways that mirror their established personalities. Riva takes out her frustrations by ramming her electric wheelchair into the wall and bawling while being scrubbed by an at-home nurse; Hupert cries, yells, and hurls accusations as she believes that her father is not doing what she feels is best for her mother; Trintignant’s behavior is the most haunting of all because he is silent, reserved, and catatonic.

Throughout most of the film, Trintignant neither shows remorse nor anger as the increasing responsibility of his wife’s care and their depressing lifestyle burden him more and more. You can tell that he cares, but he suffers quietly and behind a false mask of strength in an order to preserve morale for his wife. Eventually though, the constant wave of suffering for both his wife and himself takes a permanent tole on him that renders him almost as lifeless and robotic as his wife. The transformation is disturbing.

With that said, a large part of my problem with this film is the way much of the aforementioned content is filmed and presented. Most of the effectiveness of the above material is limited because it rests solely on the actors, who do a great job, but writer-director Michael Haneke does little to portray their characters cinematically. Almost every scene is a dull, depressing bore. Being depressing and not a “fun” movie to watch in and of itself is not a mark against Amour, but its vanilla cinematography, bland pacing, and general lack of excitement is. Aside from one creepy dream sequence, the movie’s staging, blocking, and style of shooting is colorless and lacks any emotion.

The family dynamic between mother, father, and daughter, as well as between husband and wife, play huge roles in Amour.

In the end, I guess I am glad Amour didn’t win anything beyond the meaningless Best Foreign Language Oscar, despite its strong characterizations, because it isn’t a great film in any respects. It sports memorable performances, but nothing here warranted the attention it received, aside from the aforementioned characteristics of being depressing, French, and a drama about an innocent medical character flaw. Amour is slow, devoid of personality, and about as cinematic as a high-school play.

SUMMARY & RECOMMENDATION: Amour’s diverse characterizations make it an effective and memorable piece of screenwriting, but the craft of visual filmmaking as a whole is something with which it struggles. Trintignant and Riva put on excellent performances, but they alone cannot muster much excitement into this hopelessly dull camerawork. I don’t give a fuck about how critically renowned Haenake is: Amour may be thematically nuanced, but at the end of the day, the movie is a snoozer.

? I wonder what depressing drama will win a bunch of unwarranted nominations next year. Will its characters endure cancer? Alzheimer’s? Schizophrenia? A holocaust? Slavery?