‘The Wind that Shakes the Barley’ (2006): Revolutions Are Never Simple

Ken Loach, director of The Wind that Shakes the Barley (henceforth, WSB), had this to say on the revolutionary themes of his film:

“Every time a colony wants independence, the questions on the agenda are: a) How do you get the imperialists out, and b) What kind of society do you build? There are usually the bourgeois nationalists who say, ‘Let’s just change the flag and keep everything as it was.’ Then there are the revolutionaries who say, ‘Let’s change the property laws.’ It’s always a critical moment.“

Left: Earlier in the film, stars Cillian Murphy (right) and Padriac Delaney (left) hunker down in the Irish countryside as they plan their next Irish Republican Army attack against their British colonial oppressors. Right: Near the end of the film, Delaney prepares to execute his brother and former comrade for crimes committed during the subsequent Irish Civil War. The more things change…

Much like similar films Hunger (2008, which covered the 1981 Irish Hunger Strike of The Troubles), Zero Dark Thirty (2012), and Glory (1989), WSB is a thematic period-piece that strives for sociopolitical mood and distinct visualization of human conflict over individualized tales of heroism or triumph; these pictures are the antithesis of The Patriot (2000), Braveheart (1995), or The Birth of a Nation (2016), which are formulaic in their approach to historical revolutions and their emblematic representation of the men leading them. WSB, in Loach’s own words, is more about the why and the how of revolutionary warfare, specifically revolutions against colonial powers, than the who. It effectively summarizes why so many colonial revolutions either fail or succumb to the same evils of the previous status quo, all while refusing to label its human figures as definitive heroes or villains. Everyone is sympathetic in some way.

It makes sense then that prolific yet underappreciated Irish character actors Cillian Murphy and Liam Cunningham lead this film’s thematic charge, in addition to portraying memorable human arcs whose emotional impact heightens the effectiveness of this film’s visual imagery and historical analysis, rather than distracts from them. Including costar Padraic Delaney, the entire ensemble cast maintain a human face to this dense, complicated, and dark political tale of civilization under duress, as well as the painful cyclical nature of human history and the struggle for socioeconomic liberty.

English cinematographer Barry Ackroyd, acclaimed for his cinema verite-style photography on similar political thrillers such as The Hurt Locker (2009), United 93 (2006), and Captain Phillips (2013), is the perhaps the most important visual tool in Ken Loach’s arsenal in determining the overall style of WSB. For those of you unfamiliar with the project, WSB follows the Irish War for Independence of 1919-1921, as well as the subsequent Irish Civil War from 1922-1923; Ackroyd’s use of wide-angle long-shots and muted handheld cinematography during critical scenes of guerrilla warfare and character betrayal emphasize the transient ideological sympathies of various characters within the film and among the audience. Ackroyd’s visual style and, by extension, the film as a whole, are as much about the transition from an otherwise straightforward rebellion against outside oppressors to intra-communal bloodshed, as it is about the initial rebellion itself.

Loach uses Ackroyd’s sweeping wide-shots of Ireland’s lush, windswept hills to highlight the scale of this cultural conflict, while indoor scenes of ideological debate pan rapidly from character to character like a boxing match. Almost every sequence in WSB, whether it be a shootout, interrogation, or straightforward dramatic scene, feels like a fight; all these cinematic fights are scrappy, rough, and hard won. Ackroyd’s camera movements feel breathless and rapid indoors, but far more tragic and haunting outdoors once Loach gives us time to absorb the carnage of a previous firefight or firing squad. The visual style of WSB is at once plain and blunt but also subtle and endearing, a combination of Ackroyd’s versatile cinematography and Loach’s penchant for dramatic human encounters. 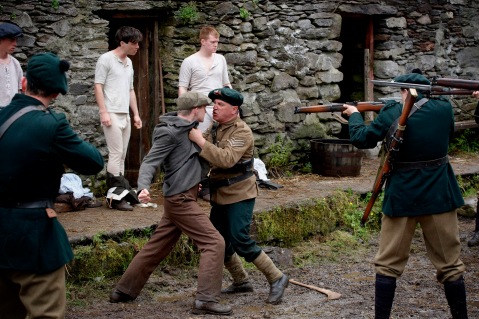 A squad of the Royal Irish Constabulary Special Reserve (aka the notorious “Black and Tans”) harass our main cast for illegally gathering for a hurling match earlier that week.

In the end, The Wind that Shakes the Barley is perhaps most memorable for the way it embraces thematic ambiguity and the many shades of grey of societal revolutions. These complex themes are personified in the film’s ideological characters and the dark, dare I say depressing violence between them. The movie ends, unlike mass audience friendly period-pieces, on a dour note of confusion, contradiction, and tragedy. It took courage for screenwriter Paul Laverty to end this story on such a gut-wrenching note, and just as much for Ken Loach to execute it; this thematic and visual commitment to sociopolitical quagmire amidst a revolutionary setting is what sets this film apart, and is a big reason why it remains one of the most identifiable Irish motion pictures of this generation.

SUMMARY & RECOMMENDATION: The Wind that Shakes the Barley is complicated and dour in both its warfare cinematography and its dramatic flair, but never without purpose or precision. Though its characters are secondary to its visuals and political themes, stars Cillian Murphy, Liam Cunningham, and Padriac Delaney flesh out memorable human faces to this bloody, tumultuous conflict.

7 thoughts on “‘The Wind that Shakes the Barley’ (2006): Revolutions Are Never Simple”