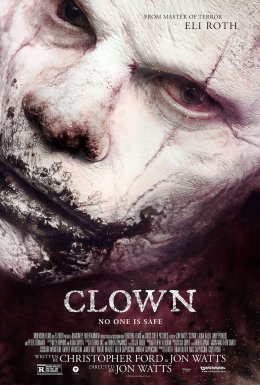 Growing up, I was a big fan of the Canadian horror anthology television series, Are You Afraid of the Dark? (1990-1996). Only the Goosebumps novels and their adapted TV series (1995-1998) rivaled Dark in terms of prolific horror-themed children’s entertainment during the 1990s. Much of the show was cornball, featuring bad child actors, overacting adults, and too many stories with convenient happy endings. That being said, elements of the show were quite morbid for a child audience, and several episodes were particularly memorable, such as the sophomore episode, The Tale of Laughing in the Dark, featuring the infamous antagonist, Zeebo the Clown. 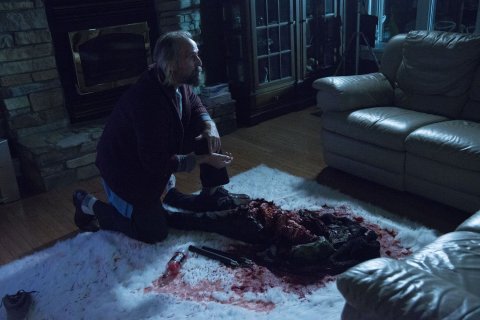 Little did I know that fear of clowns would continue into my adult life, if partially in jest. While most folks disconcerted by clowns are entertained by low-budget schlock like Killer Klowns from Outer Space (1988) or Stephen King’s It (1990), those works are too eccentric or satirical for my horror tastes.

Cue Jon Watts’ debut feature, Clown, which first gained attention and independent studio funding after Watts and co-writer Christopher D. Ford uploaded a fake trailer online claiming (lying) that it was produced by international gore-porn hound, Eli Roth. Respecting the sheer nerve of these aspiring filmmakers, Roth wound up producing the film for real, and the result is a bizarre, dare I say captivating mishmash of werewolf motifs, David Cronenberg’s The Fly (1986), and classic childhood fears of creepy clowns.

Clown is a character-piece candy-coated in clown jokes and parental paranoia. It’s little different than John Landis’ An American Werewolf in London (1981), given its emphasis on relationships and monstrous transformations, playing on your sympathies toward the tragic protagonist until his metamorphosis is complete. Adding to the creepiness is Christopher Ford’s detailed mythology of the titular antagonist, a long forgotten Northern European demon called the “Cloyne,” which feasts on children. Its skin, hair, and nose can be mistaken for an ordinary, harmless clown costume, but unbeknownst to protagonist Andy Powers — who gives a terrific lead performance, by the way — they carry a terrible curse that turns the wearer into the fearsome, child-eating beast in a matter of days, complete with razor teeth, clawed hands, big toes, and rainbow blood. 😉

Watts and Ford explore this “Cloyne” mythos and behavior in excruciating detail, to the point where the film almost breaks free of its B-movie camp. The hair and makeup on Powers are fantastic, and do much to sell both our sympathy towards him and fear for his victims. Watts’ great use of low-key lighting and sound editing maintain tension throughout, while his smooth long-shot scene transitions, whereby one character/subplot exits frame and another enters the same frame moments later, sustains pacing. The films lone significant weaknesses are its shaky supporting cast, namely Laura Allen as the female lead and wife of Powers’ main character. She and several other castmembers struggle with their odd roles, but aren’t helped much by several odd character decisions that might have necessitated another script rewrite.

However, Swedish actor Peter Stomare is the highlight of the supporting cast, embracing his archetypal role as the older, wiser, expository character who updates the audience (and his slower witted castmembers) on the do’s and do not’s of exterminating homicidal supernatural clowns. Whenever the film’s so-so dialogue or questionable character motivations threaten to drag down the fun, Stomare’s highbrow performance constantly lifts the film up. The man has been a great character-actor since Fargo (1996), and he shows no signs of stopping here.

What seals the deal for me, however, is Clown’s terrific, spine-tingling finale, wherein Eli Roth guest stars as the fully transformed Cloyne monster. Laura Allen is inconsistent throughout the film, but she demonstrates great physical acting and stuntwork in her tango with her former husband, shielding her son (a capable Chrisitan Distefano) from the Cloyne’s ravenous attacks. This well choreographed cat-and-mouse sequence is somehow both action-packed and horrifying, showcasing depth camerawork as well as gruesome gore FX. 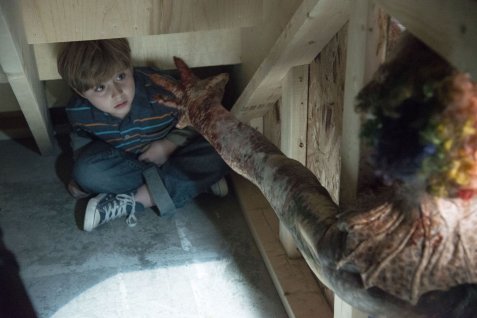 In the end, Clown is an odd but highly enjoyable film for yours truly, as it represents a sort of closing chapter in my childhood partial phobia of creepy clowns. It backs up its oddball premise with capable direction and solid, if not spectacular screenwriting, so I can recommend it on a basic filmmaking level alone. That being said, Clown’s greatest appeal is its homage to the childhood fears of countless young adults, most of whom were born in the early to mid-90s who watched shows like Are You Afraid of the Dark? and Goosebumps as little kids. It’s safe to say that the Cloyne is nowhere near as subtle as Zeebo the Clown, but the former has the ability to scare my adult pants off, so I tip my hat to him.

SUMMARY & RECOMMENDATION: Clown is an example of horror schlock done right, executed in the exemplary body horror styles of David Cronenberg and John Landis. Writer-director Jon Watts nails his thematic, visual, and emotional tones perfectly as his main character descends into bizarre yet terrifying madness. Peter Stomare is a capable supporting character who holds his end when the rest of the cast wears thin.

— However… much of that supporting cast is undone by shaky dialogue, nonsensical motivations, or bad performances.