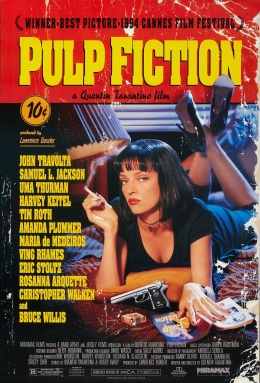 Though it took far too long for it to be selected for preservation in the Library of Congress’ National Film Registry, in 2013 Quentin Tarantino’s most influential masterpiece became officially canonized in American film heritage forever; however, for the previous 19 years, the film had already etched itself deeper and deeper into greater American pop culture. To quote Gene Siskel:

“… the violent intensity of Pulp Fiction calls to mind other violent watershed films that were considered classics in their time and still are. Hitchcock‘s Psycho [1960], Arthur Penn‘s Bonnie and Clyde [1967], and Stanley Kubrick‘s A Clockwork Orange [1971]. Each film shook up a tired, bloated movie industry and used a world of lively lowlifes to reflect how dull other movies had become. And that, I predict, will be the ultimate honor for Pulp Fiction. Like all great films, it criticizes other movies.”

From gang-rape to foiled heists to watches up asses, the world of Pulp Fiction is a wild and fucked up one.

Not only did Pulp Fiction (PF) take the non-chronological, idiosyncratic storytelling style of Tarantino’s Reservoir Dogs (1992) and execute it with greater precision and ambition, as well as revitalize and help launch the careers of John Travolta, Uma Thurman, and Samuel L. Jackson, it also revolutionized the American independent filmmaking scene overnight. Going from the Palme d’Or victory at Cannes to grossing over $213 million on a $8 million budget with a star-studded cast caught the attention of Hollywood studio executives. Since then major studios have invested big-time in either distributing or partially funding independent efforts, and former minor studios like Miramax and New Line Cinema have become absorbed as pseudo “small budget, indie-production” arms of major corporations like Walt Disney and Warner Bros., respectively. In another words, you’d be hard-pressed to find a more influential film from the 1990s.

Arguably the most wonderful thing about PF’s smash success and enduring legacy is how everyone seemed to get it right from the start and nobody’s forgotten that impact in the 21 years, since. One could call PF a sort of Star Wars (1977) of independent filmmaking, a movie that landed like a bomb in the cinemas and burgeoning 1990s film festival circuits of its time and whose groundbreaking trends have continued to this day. Not to mention Tarantino himself has become as big a name as anybody in Hollywood, and justifiably so.

The first thing that stands out to new viewers of PF is its narrative structure, indicative of Tarantino’s now legendary and unique approach to screenwriting. The movie tells not a singular, focused story but rather 3-4 intertwined smaller stories (depending on how you count) that come into and out of narrative focus as the film transitions from one to the next, often out of chronological order. What’s so impressive about this ambitious story arrangement is how coherent, well paced, and interesting each set-piece is. Every “subplot,” so to speak, in PF is incredibly straightforward, easy to follow, and ripe with tension and excitement despite being interwoven with several others, which are only loosely connected to it; in fact, each story magnifies in emotional impact and narrative depth because the extraneous nature of PF’s world fleshes out and expands upon the “source material” of each minor story by connecting them to one another in just the right way — distant but clear connections through a shared diegesis and characters.

In many ways, PF is like a collection of mid-20th century hardboiled crime novels and pulp short-stories (hence its name and numerous allusions) cut apart and jumbled together as a single sampling of a fascinating, brutal crime-world. The genius of Tarantino is how he manages to not only interweave all these various narrative elements together into a logical whole, but also synergizes everything such that each individual tale is made more memorable by its juxtaposition or relationship to the cinematic whole.

Much of this narrative potency derives as much from Tarantino’s direction as his screenwriting. The way each piece of the story web is shot recalls (or rather at the time, foreshadowed) modern-day internet browsing, in that historical and cinematic allusions swoop in and out of the story with maximum clarity and expositional efficiency. PF could and probably should be considered a miniature blueprint for the comic book cinematic universes of today, namely the Marvel Cinematic Universe and the DC Comics Shared Universe. Unlike an Avengers: Age of Ultron (2015), PF doesn’t let its interconnected, complicated diegesis weigh its story down down but rather build it up. Much of Marvel’s canon feels like a bunch of standalone projects with unnecessary added baggage bogging down the enjoyment of each individual story, where as PF’s compilation of minor stories does the opposite. 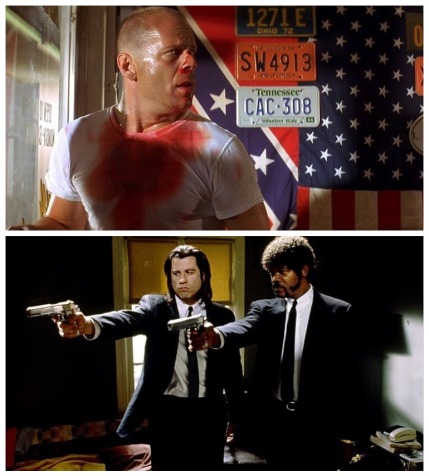 Top: Should I stay or should I go? Bottom: Going out, execution style.

Numerous iconic scenes demonstrate this penchant for lightning-fast world-building, diegetic tone, and character backstories, such as the 1950s restaurant of Jack Rabbit Slim’s, the prelude to the Golden Watch, and of the course the Biblical execution of several cowering mob associates by Travolta and Jackson. That being said, most every set-piece in PF has become legendary and quoted ad infinitum over the past generation; this is all a tribute to the masterful cinematography, screenwriting, and performances of this once-in-a-lifetime pop culture phenomenon.

There’s not much else to discuss about Tarantino’s magnum opus. My favorite work of his remains the magnificent two-part samurai epic, Kill Bill (2003-2004), but Pulp Fiction is without a doubt his greatest singular impact on the film industry. The movie-going world has never been the same since its release, and like all great cinematic pop culture milestones, the end result of that change has been overwhelmingly positive. While Tarantino’s masterwork is, in many ways, partially if not mostly responsible for the countless overblown indie-favorites and Oscar-baits of today, its tenacity, overall quality, and ballsy style is worlds away from the generic, formulaic Boyhoods (2014) of yesteryear.

SUMMARY & RECOMMENDATION: I don’t know which is better, Tarantino’s screenwriting or his direction, but each one is spectacular in their own way in his legendary 1990s indie-masterpiece. How he managed to adapt a conglomeration of decades’ old pulp crime fiction in a way that is not only legible but awesome, and furthermore how he makes it so visually compelling from opening to ending credits is beyond me.

— However… this is nitpicking in the extreme, but PF’s soundtrack is not up to snuff with Tarantino’s later works.

? A quarter-pounder with cheese? Well, I can picture the cheese, but uh… do they have Krusty-partially gelatinated, non-dairy, gum based beverages?

8 thoughts on “‘Pulp Fiction’ (1994): Nonlinear Storytelling for the Masses”