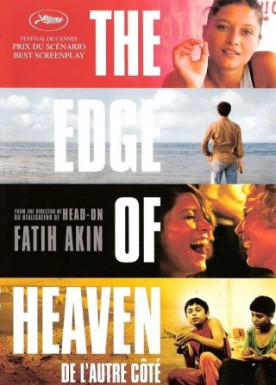 Many filmmakers, particularly those of minority or immigrant cultures living in the West, make their marks in cinema with subject-matter that is related to their ancestry or cultural origins. Gurinder Chadha (a British woman of Indian descent) has spent most of her career shooting films about South Asians or Indo-British people living in the United Kingdom (Bend It Like Beckham [2002], Bride and Prejudice [2004]), Deepa Mehta (a Canadian of Indian descent) has payed homage and critical analysis to her ethnic origins in her Elements Trilogy (Fire [1996], Earth [1998], Water [2005]), and our filmmaker of interest in this review, Fatih Akin (a German of Turkish heritage), looks back to his ancestral origins as well as the complex dynamic of emigration to Western states, the lifestyles and diverse cultural heritage of second generation Westerners born of non-Western immigrants, as well as the larger sociopolitical implications of Western national ties to the non-Western world.

Poor Ayten (Nurgül Yeşilçay, foreground). So tired from so many activist protests, being rude, and being dirt broke.

The Edge of Heaven is a patient, introspective picture that focuses its story on the intimate, interpersonal lives of ordinary citizens stretched against an international backdrop of a complex, multicultural landscape. Akin forgoes any central protagonist and instead extends his screenplay’s thematic content across three interconnected families that become intertwined through immigration and chance. The story itself is none too concerned with spoiling its own major events, even naming two of its three acts after two of its characters’ deaths. However, the larger point of the non-traditional narrative format is to relate the often conflicting (yet ideally coalescing) identities that immigrants and their families have to the day-to-day social sphere of new and native homes. The narrative is mostly linear but takes a few instances to backtrack in time to clarify earlier events with introduced characters.

The cast is primarily composed of three families: The first is a longtime Turkish emigre to Germany, Ali Aksu (Tuncil Kurtiz) and his professor son Nejat (Bavi Davrak) who both live in Bremen. Ali meets a Turkish immigrant prostitute named Yeter Ozturk (Nursel Kose) who works to support her college-aged daughter Ayten (Nurgul Yesilcay), who is in turn a member of a radical Turkish Communist group back home. While Ali introduces Nejat to his hooker-girlfriend, unbeknownst to all of them, Ayten makes her way to Germany after her cell is raided by Turkish government authorities and tries to make contact with her mother, thinking that she works in a shoe shop instead of the sex trade. However, this leads to the introduction of the third family of interest when Ayten befriends a local German student named Lotte Staub (Patrycia Ziolkovska) who takes her in much to the discomfort of her conservative mother, Susanne (Hanna Schygulla, longtime collaborator with German phenom director Rainer Werner Fassbinder).

As the story progresses, these three families become increasingly intertwined as relationships develop, international politics and immigration laws become involved, and general misunderstanding and prejudice gradually give way to maturing patience and human acceptance. In many ways, it’s a cliched story and the subject-matter itself contains nothing new or groundbreaking, and it comes across silly how often certain characters come so close to finding each other (or recognizing each other) but slip by; however, the way in which the film conveys its controversial material without descending into preaching is commendable. At times the politically charged dialogue can be funny, like in one notable conversation between socialist radical Ayten and conservative German mother Susanne, where the two discuss the political turmoil in Ayten’s home country of Turkey, where Susanne assures her that, “It’ll be much better when you join the European Union,” to which Ayten responds with hilarious obscenities. Other good exchanges, some memorable for their wit and humor while others more for their philosophical value, bolster the film’s dialogue and thus its characters.

Rounding out Edge of Heaven’s (EoH) commendable features are Akin’s confident camera and cinematographer Rainer Klausmann’s beautiful cinematic vistas and soft-lighting, which coalesce most of the film’s sequences. Akin does an admirable job making his film, particularly its closing scene, do justice to its title; its visual aesthetics work with the dialogue in strange but appropriate ways to make this story’s philosophical and sociopolitical themes fit.

Despite its lofty title, quality dialogue, and good direction, no single aspect of Edge of Heaven or synergistic effect of any combination of its various elements make it a terribly memorable or resounding film. It’s a smart flick with interesting things to say, but is never wholly engrossing in its own right. Based on this one film, I’d say Akin has a way to go before he reaches the levels of introspection and technical skill of Mehta’s Fire (1996). Still, Akin’s film displays more artistic storytelling and nuanced subtly than anything Gurinder Chadha has ever made (as fun and quirky as Bend It Like Beckham was, it wasn’t very smart or this self-aware), and its dialogue is highly entertaining for a low-key drama like this. All in all, the film is a solid if unspectacular entry in the “heritage self-reflection” subdrama of Western immigrant filmmakers.

SUMMARY & RECOMMENDATION: Akin handles his non-traditional, non-protagonist-driven narrative well and spreads sympathy and emotional complexity across his whole cast. The characters are interesting and the story itself is thematically rich and intelligent. Akin’s eye-catching camerawork and cinematographer Klausmann’s memorable visuals flesh out a film that otherwise depends almost entirely on its screenplay.

— However… the film as a whole still isn’t terribly fascinating despite its basic quality construction. The story is slowly paced and many of the instances where characters are searching for each other (or simply try to recognize one another, but fail) feel more gimmicky than tragic.

? He would make God his enemy in order to protect me.

I love movies, music, video games, and big, scary creatures.
View all posts by The Celtic Predator »
« ‘Dawn of the Planet of the Apes’ (2014): The Smartest Blockbuster in Years
‘Brotherhood of the Wolf’ (2001): An Eccentric Action-Horror Gem »