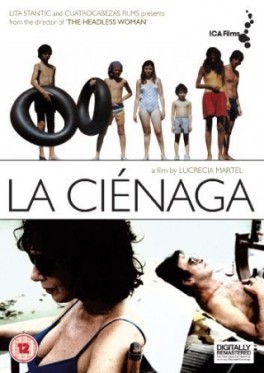 La Cienaga, “the swamp” en Ingles, is wet, murky, and more than a little hazy — as a movie, I mean.

Roger Ebert described this film “like attending a family reunion when it’s not your family and your hosts are too drunk to introduce you around.” I’d say that’s an adequate description of the movie from start to finish. At times, the film almost feels like it was shot by a drunken guest of the family reunion, as if writer-director Lucrecia Martel downed a few glasses of her cast members’ wine before shouldering the camera around on set. The whole movie and its incredibly loose “narrative” (saying the film has any sort of formal story structure is using the term very broadly) feel as if the experience were interpreted through alcoholic lenses and you, the viewer, are left to stumble around the dank, sweaty, humid, disorganized vacation homes of these socially decaying creatures.

That the film conveys a distinct mood and references a myriad of interesting subject matters, including but not limited to class inequality, racism, broken families, and the rotting infrastructure of the filmmaker’s native country with such an inebriated attitude, is impressive as well as immersive; at the same time, you can’t help but feel underwhelmed and utterly confused by the time the credits roll.

The film’s themes are built around two cousins whose claustrophobic bourgeois family lifestyles are threatening to unravel. The main cousin and matriarch of interest, Mecha (an emotionally unstable Graciela Borges) is consistently the drunkest of the lot, and takes her frustrations out on her Amerindian servants with racist rants and a plethora of profanity. The husbands seem emotionally detached from their disorganized, self-destructing families, while the otherwise cute, innocent children struggle to grow up when they see what kind of life is in store for them. A good part of the time, the adolescents more or less raise themselves.

Much subtle and not-so-subtle social allegory exist within these drunken musings and sweaty house chambers, some of which are interesting but a good portion of which you’ll struggle to remember after watching. The families’ decaying homes and obsession with wine speak to a larger societal Argentinian decay that Martel repeatedly hints at, and some homoerotic tension creeps into the frames between one of the daughters and their native servants.

These and other symbolic overtones coalesce throughout La Cienaga in repeated patterns as the characters loiter about each other. The deeper social implications of these interactions are mildly interesting, but the plethora of indistinct characters and random guest appearances, combined with Martel’s confusing, almost inebriated direction make the cinematic experience incoherent and tiresome. Over a hundred minutes of this stuff yields boredom and complete disinterest by the time the credits roll. I commend Martel for painting such a detailed picture of a family (and possibly community) in stagnation, but the problem with the film is that that picture is not terribly interesting. As always, if you get off on this sort of vague, episodic social analysis common in low-budget foreign dramas, you may find something of value in La Cienaga, but most everybody else, including myself, will pass this thing over feeling the disorientating effects of a heavy drinking episode, while enjoying none of the euphoric benefits.

Graciela Borges (foreground, right) drinks it up at her crumbling vacation home, a mother of a family implied to have “fallen from grace,” as it were.

SUMMARY & RECOMMENDATION: In general, La Cienega bores and confuses as much as it intrigues and startles. You won’t remember most of the characters’ names nor be able to distinguish many besides a couple of the most central figures. Martel’s commitment to creating a drunken haze of a cinematic experience makes her imagery incoherent to the point where you mentally check out of the experience.

— However… Martel manages to convey some visual flavor from her cinema verite camerawork, and packs a healthy does of allegorical substance into her psuedo-narrative. Some of the characters catch our attention, like Borges’ Mecha.

? Bolivia has cheaper school supplies? Whatever man, I’ll take your word for it…