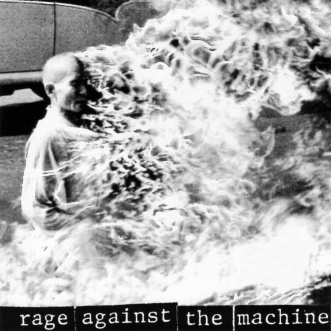 Rage Against the Machine is a band that has always held a special place in my heart — a very, very angry part of my heart. If you spend much time at all listening to (not even understanding) their music, you will probably gain the urge to smash every fucking thing in the room with a high-octane burst of rap/rock fury. Their music is that effective. However disconnected RATM’s political message has become with a significant portion of their fanbase, the fact that the violent rage fueling every note and beat of their songs always hits home by either infecting rage or inducing cowering fear in the listener is an impressive feat that few artists have ever matched. The memorable nature of Rage Against the Machine (RATM) is empowered by the additional fact that, quite actually, no band has ever sounded quite like Rage. Yes, there have been many ineffective posers that attempted to replicate the power of RATM’s three studio albums and single record of cover tracks by also combining aggressive rap vocals with hard rock riffs (e.g. the endlessly annoying and shallow “nu-metal” band, Limp Bizkit), but all those attempts at replication failed miserably when compared to the veteran songwriting and honest emotion of Zack de la Rocha, Tom Morello, Tim Commerford, and Brad Wilk. In other words, no one has ever rocked out like this before or since, regardless of whether or not you’re in tune with Rage’s political message.

Speaking of those political overtones, nobody has ever made rebelling against the system with violence and anger so cool. RATM’s Marxist spirit has always been the ultimate source, the core of their aggression, and it speaks volumes to understand how symbolic they have become as the poster boys for sticking the middle finger to the mainstream, right-wing conservatism, corporate America, and cultural imperialism. Their very active, aggressive stance against these philosophies and empowered groups is a message that has connected with millions of fans. While over the years this political message has often fallen on deaf ears with many of their fans (e.g. Paul Ryan) like I mentioned, it has been picked up and echoed in the ears and voices of countless socio-politically aware music fans across the globe. Or, if you’re like me, you may enjoy and be aware of RATM’s political stances while perhaps not always agreeing with 100% of them. That’s OK too. Either way, you still channel many elements of the Raging music simply by listening to and understanding their songs, and then spreading them for the sake of good music.

But how did we get here? How did this “Raging Against the Machine” first start, anyway? Well, it all began way back in 1992 with RATM’s self-titled debut record. The Los Angeles-based crew broke new ground by becoming the first (and really only) artist to successfully merge the seemingly dissonant genres of hip hop and rock ‘n roll. Their soon-to-be trademark aggressive style and politically fueled lyrics easily tied the the ten tracks together in a distinct and unique theme. That theme holds up today as well as it did then in the early ’90’s for obvious reasons.

Though Rage’s riffs are touted as part of the metal subgenre of rock ‘n roll, their hooks and aggressive instrumental style has far more in common with hard rock juggernauts (and heavy metal precursors) Led Zeppelin, as well as popular alternative bands of the early ’90’s, such as Nirvana, Soundgarden, Smashing Pumpkins, and even Nine Inch Nails. RATM’s rock style is much more akin to a standard ’90’s/modern alternative style than anything Metallica ever made, in other words. They are just as much a product of the early ’90’s rock scene as anything that came out of Seattle, so any listener should always keep that in mind before listening to a Rage album. If you come in here looking for a Megadeth ally, you will be sorely confused.

As far as Zack de la Rocha’s now famous rap vocals are concerned, their range of quality is much wider on this first album than Tim, Brad, and Tom’s instrumentals. Oftentimes, they are great (“Wake Up”), but seemingly just as often, they feel forced and awkward, as if they were recorded with little to no rehearsal (“Township Rebellion”). These weaker tracks still manage to conjure up plenty of politically fueled angst and general rage, but they are far less effective than when Morello’s idiosyncratic riffs are melding with de la Rocha’s more tightly controlled verses.

As for Morello’s now widely recognized funk style and bizarrely tuned guitar controls, this debut album sees him at his most traditional. It wasn’t until later in the band’s career that Morello more fully emerged as the inventive, unique guitarist that he known as today. There are definitely hints of what’s to come, with wacky solos showing up in a few tracks (“Wake Up,” “Know Your Enemy”), but for the most part, the majority of Tom’s showcase talents emerge as stuff that we have heard before (“Bombtrack,” “Fistful of Steel,” “Freedom”).

However, arguably the most underrated, yet also the most critical element of RATM’s sound, is Commerford’s bass. A distinctive, powerful signal of quality hard rock since the ’60’s and ’70’s with The Who and Led Zeppelin, Rage’s strong guitar riffs and pounding drums are held steady on top of the rock-solid base that is Commerford’s low, thumping notes. His slick work with the 4-string is what holds together all the other musical elements at play, and makes the band’s sound feel so much fuller and deeper. Rage just wouldn’t work without him.

All in all, RATM made a fine first effort with their debut album of 1992. It has its share of problems and a noticeable amount of weaker tracks with notably poor lyrics, to be sure, which is somewhat unforgivable given the length of some of those poorer tracks, and given how the album only has ten songs in total. Despite this, the sheer genius of the album’s strongest moments easily manage to propel RATM into the stratosphere of veteran rock musicians, and easily make up for tracks like “Township Rebellion.” The titanic, furious strength of songs like “Killing in the Name,” “Bombtrack,” and “Wake Up” will make you thank the Lord that four rebellious guys from the West Coast took the risk to finally meld two of the greatest American music genres into one magnificently violent sound. This is how you Rage.

Standout Tracks: “Killing in the Name,” “Wake Up,” “Bombtrack,” “Know Your Enemy,” “Take the Power Back”

? Now pardon me while I go smash every fucking thing in my room.