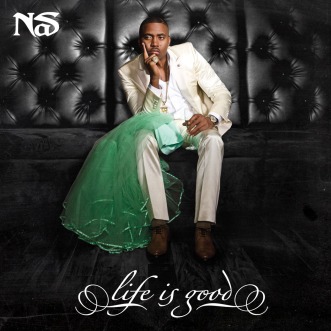 When I first sat down to write my review for Life is Good, the latest and eleventh studio album by my favorite rapper, Nas, I wasn’t quite sure whether to judge it with the single, “Nasty,” included. Normally, one good song won’t make such a huge difference in an entire album’s worth of tracks, but given that “Nasty” is the best song that Nas has written in years, its inclusion or exclusion matters. I was thinking for a while that I would write my judgment without the star single, given how it was not included in the standard release of the album. The fact that it was not included in the album’s standard release still, to this day, makes no sense to me. But then I recently scanned the Wikipedia page for the album and saw that it was included on the “Deluxe” version of Life is Good (LIG), and thinking about just how good “Nasty” was, I thought, “Eh, that’s good enough for me.” So I gave Nas the benefit of the doubt and threw it in the mix for this review. With that in mind, let’s go ahead and tackle Nas’s “good life” (fuck you, Kanye).

Nas’ career has seen its fair share of dips and peaks, valleys and mountains, dizzying highs and embarrassing lows. While definitely one of the best rappers to have ever lived, he’s taken the time to write sloppy, lazy records just like any other rapper (Nastradamus [1999], Untitled [2008]), and it took a full-blown super-feud with Jay-Z to finally kick him in the pants to start writing good songs again (Stillmatic [2001]). I will always give the man a chance, however, as he is the author of what is the single greatest hip hop album ever produced. Aside from Illmatic (1994), he also came out with the excellent sophomore effort, It Was Written (1996), so there’s plenty of reason to stick with Nas despite his inevitable dips in songwriting.

With that said, it has been some time since God’s Son came out with quality record. We hip hop fans have to learn to accept the fact that Stillmatic was a long-ass time ago, so it’s about high time that the man dished up something worth shouting about. Is LIG that album? Not really. But it’s a lot better than any of his recent efforts, and it does sport one of his best songs ever in “Nasty,” and that is something worth shouting about given how the man came out with Illmatic.

LIG doesn’t start off too well. “No Introduction” apparently did need an introduction, as the clash between Nas’ rapid-fire raps and the extremely slow synth-drum beat sounds disorganized and unappealing. Things get noticeably better in “Loco-motive,” where the verses and the heavy bass beat compliment each other quite well for some fun old-school Nas action. The rest of the material is pretty digestible, if not exemplary, up until the refined “Reach Out,” featuring some excellent vocals from Mary J. Blige. Other than “Nasty,” this is the best song on the album. “The World’s an Addiction,” “Summer on Smash” (minus an annoying chorus), and “You Wouldn’t Understand” are all quality tracks, but then the album takes another dip and gives some pretty forgettable (“Back When”) and annoying (“The Don”) material. “Stay” features some appealing jazz trumpet sampling, but the rapping doesn’t quite coalesce with the bass and beats. “Cherry Wine” picks things up a bit with a vibrant drum beat and vocals by the late Amy Winehouse. “Bye Baby” feels relatively boring by comparison, continuing the trend of inconsistency in the wine.

That’s how I would describe the whole album in one word: Inconsistent. Just when the music starts to pick up with some decent tracks, things head south again with mismatched raps and production beats or annoying choruses. The sampling ranges from quite good (“The World’s an Addiction,” “Stay,” “Cherry Wine”) to pretty bad (“The Don”). There’s really such a huge range of quality in the tracks that’s it hard to get too into LIG.

What is consistent is the theme that holds the overall mediocre collection of songs together. Nas’ divorce with ex-wife Kelis looms large over much of the album, with some tracks dedicated entirely to her (“Bye Baby,” “Cherry Wine,” “Roses”). This is a partially redeeming aspect of LIG, the fact that it does feel like a fully conceptualized album with an inspiration and a purpose to it. It does’t do much to save the record from its lower moments, but it’s something.

As for the bonus tracks on the “Deluxe” version, “Nasty” is the standout, but there are some other admirable efforts here that really make you wonder why on earth Nas and his producers left them off the “regular” album. “Roses,” another “divorce song,” is pretty good, showcasing some more good sampling, and “Where’s the Love” features solid rhymes paired with Cocaine 80’s sung vocals. “Trust” (the iTunes bonus track) is the one forgettable song that was probably best left to the deluxe versions.

Is LIG the quality album Nas needed to revive his career? I would say, “Kinda.” It’s definitely better than his previous recent efforts, but it’s far from the kind of re-invigoration that Stillmatic was. If you’re a die-hard Nas fan, you should probably pick up the deluxe version to make sure get the excellent “Nasty” single, plus a couple other quality tracks. If you’re on the fence with God’s Son, though, there are far better albums on which to start your introduction of Nasir Jones.