A common phrase haphazardly thrown around is the reference, “a jack of all trades, but a master of none.” Bethesda’s bestselling action-RPG series, The Elder Scrolls, has long been considered a varied, multilayered project that exemplifies many aspects of a “jack of all trades.” As the series has continued to evolve, particularly after its spread onto consoles with the third iteration, Morrowind, in 2002, each facet of the role-playing games has continued to evolve and become more refined as the developers continue to make their titles more and more multilingual. This wide-reaching scope is more definitive of the fifth Elder Scrolls title, 2011’s Skyrim, than perhaps any previous title. Skyrim is anything but a one-trick pony. In Bethesda’s latest epic, you can refine your character with deep controls and engage in combat in more varied ways than ever before. Do you want to be a master of stealth, sneaking and skulking in the shadows, waiting to pounce on your prey (or steal every penny they have) when the moment is right, like a cunning, silent black widow spider? Would you prefer to burst into every battle arena, swords clashing and slicing bone from sinew as loudly as possible? Or perhaps you would like most to strike from a distance, shooting down enemies with deadly arrows from all the way across the map? None of the above? Well then, there are entire practices of the arcane wizardry to consider…or maybe you would just like to do a bit of everything? Well, in Skyrim, your gameplay experience can be whatever you want it to be.

The Elder Scrolls finally adds dragons to its pantheon of monster foes for you to fight.

Skyrim’s depth and nuance is best illustrated in its wide range of combat options, but every aspect of the interactive experience is fantastic. What makes Skyrim sublime is how the deep combat systems meld with the series’ best character-building system yet. Various aspects of the game’s character-building have been refined and some have been removed entirely. Although you still get to pick a race that does, to some extent, grant special abilities (such as the Argonian’s water-breathing) and make learning certain skills easier than others, the pigeonholing ends there. You don’t select a class or anything like that. For the entire rest of the game following the main story arc’s impressive opening, your class is what you make it. Aside from your personal combat style, skills such as alchemy, smithing, and sales all combine to form a character that is uniquely yours. No protagonist in Skyrim will be exactly the same, which is exactly what an RPG project should be entail.

Skyrim, like other Elder Scrolls titles, is also defined by its quests and, to a lesser extent, its primary narrative. Strictly speaking, the vast majority of Skyrim’s infinite (I’m not kidding) number of quests are fantastic, and most of them will never get old. There is always something to do — some marauding monster to rid, some hidden treasure trove to plunder, or some gang of bandits to rob, or some high profile target to assassinate. Their scope, scale, and pacing will vary considerably from one mission to the next, with each adventure keeping you on your toes.

As for the main quest, it is a huge improvement over Oblivion’s (2006), and there was nothing terribly wrong with that story to begin with — it was quite good in its own right. However, Skyrim ups the ante in every way imaginable. Fighting dragons is far more interesting and exciting than closing an Oblivion Gate ever was, and you can always choose to forgo combating a fire-breathing lizard if you don’t want to fight them if you spot them from a distance.

With all of that said, though, the best part of Skyrim is still the marquee attribute that the Elder Scrolls series has made famous with ever entry: The open world. If Far Cry 2 (2008) is how not to do an open-world game, then Skyrim is the absolute polar opposite. You will encounter all sorts of wondrous and fascinating things in your travels of the Imperial province of Skyrim. Simply wandering the wilderness is the often the best way to play Skyrim, as you will create dynamic, evolving questlines all by yourself and under your control. You can find monsters to slay, beasts to hunt (on horseback or on foot), people to help (or rob/murder), and of course, dungeons in which to delve. It’s safe to say that the entire world of Skyrim is open to you and at your fingertips. Perhaps the best part of Skyrim’s open world is the way it creates these unscripted situations and adventures for you at every turn, and it always keeps your attention and always holds your interest with these memorable moments that you, yourself, manufacture.

The worst thing about The Elder Scrolls V: Skyrim is that it is so hard to put down, and that is a true definition of a great game. You will literally pour dozens of hours into this experience before you even realize what is happening. If you give Skyrim an hour, you will end up giving it over a 100 before the month is over. It is a game that will consume you. 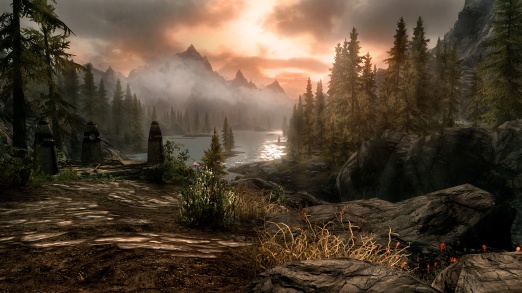 While close inspection of the game’s environment reveals plenty of rough edges and poor textures, the game is simply beautiful when taken in as a whole, and the environmental experience can be improved drastically through in-game modifications.

As is the case with any Bethesda project on the PC, if you choose to utilize mods (and you definitely should if you own a PC), then the options for in-game customization are truly endless. More or less every aspect of the game’s features can be altered, refined, or improved upon through the use of the mod community. You can even turn Skyrim into Middle-Earth if you want to.

The only significant negative aspects of Skyrim are the same problems that have been plaguing The Elder Scrolls ever since the series’ inception. Bugs will abound throughout most of your experience, although thankfully, most of the time they will be minor. Most problems will concern a small graphical glitch here and there, although some will be as annoying as broken quests and automatic crashes in some spots. Like the overall game-experience in general, everyone’s combination of problems will be unique, but many trends have emerged in the months since Skyrim’s release that have garnered much attention from the online community, and have in turn yielded many grateful solutions to Skyrim’s gaming headaches.

In the end, though, the fifth entry in Bethesda’s acclaimed Elder Scrolls series is an all-around fantastic game, and it deserves all the accolades and attention that it has garnered. This is up there with the Mass Effect series (2007, 2010, 2012) as one of my favorite RPG games of all time. I cannot recommend Skyrim enough, as it is an experience that will consume you in the best, most fun way possible. It is most certainly a “jack of all trades,” although I would say that is also a master of many, and is therefore a masterful game. Enjoy.

Standout Features: Skyrim boasts amazing combat and RPG customization at every level; a staggeringly detailed and endlessly entertaining open world that gives and gives; the soundtrack is beautiful

Noticeable Weaknesses: Bugs, the curse of every Elder Scrolls open-world experience, return here. They are the game’s main vice.

? Where would we be without the arrow to the knee?