‘The Master’ (2012): Paul Thomas Anderson at His Most Obtuse 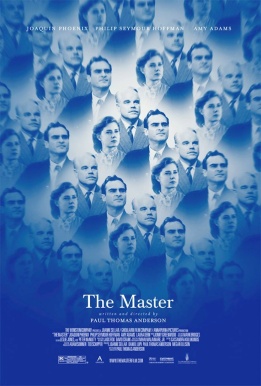 Paul Thomas Anderson’s latest auteur-piece, The Master, is an exercise in patience and drawn-out character-studies. Given the rave critical reviews and more than a few snobbish YouTube comments praising the film, I left the venue some two hours later a little confused and more than a little drowsy. If you want a lesson in great character-acting and poor posture, watch Paul Thomas Anderson’s (PTA) latest film, The Master. If you’re looking for thought-provoking cinema that is both memorable and interesting, I suggest you look elsewhere. The Master’s idiosyncratic visuals, eclectic music, and fantastic performances are worth the price of admission alone, but there is little here that will captivate you or keep you glued to your seat for the full 143 minutes.

In essence, Anderson’s newest movie is an analysis of cults and how they work, specifically their creators and the leadership that strives to keep the gears turning on the indoctrination machine. The film’s story draws most immediate parallels to Scientology and its founder, L. Ron Hubbard, which is ironic considering how Tom Cruise is a good friend of PTA. Regardless whether one chooses to draw allusions to niche followings or more mainstream religions, the point of the movie is to place a magnifying glass on the inner workings of philosophical or spiritual movements in modern society, specifically, post-WWII America.

Anderson guides us through the narrative from the perspective of a newcomer to the movie’s fictional movement, which is named “The Cause.” Our fish-out-of-water main character is a WWII veteran and drifter, Freddie Quell (a sardonic, aggressive Joaquin Phoenix), who stumbles upon The Cause by chance after stowing away on a private yacht, crashing the party, and becoming inebriated. Slowly and awkwardly, we are introduced to the religious movement through Philip Seymour Hoffman’s relationship with Phoenix. Hoffman, the leader of the movement, takes a liking to Phoenix’s wandering, independent spirit, and their dynamic molds into a sort of father-son, master-apprentice relationship, hence the title. The film is at its best when the drama centers around Hoffman and Phoenix, as most of the other characters are rather uninteresting, despite Amy Adam’s terrifying rendition of a religious housewife.

Philip Seymour Hoffman stars as Lancaster Dodd, the charismatic, ambitious leader of the enigmatically named religious movement, The Cause. His protege, Freddie Quell (Joaquin Phoenix) attempts to find fulfillment in his teachings.

My issue with Phoenix’s relationship with Hoffman is how it never develops beyond Phoenix’s frustration with his teacher’s preaching and his inability to find fulfillment within The Cause. Phoenix never seems to learn anything, grow, or change, and as a consequence, neither do we. That, combined with the fact that the story is ridiculously slow-paced, can make large portions of Anderson’s latest “art-house” picture seem dull. This is a shame, because both Hoffman and Phoenix put on fine performances as master and apprentice, respectively, and have terrific chemistry with one another.

The Master’s story never expands beyond its first act. It makes for an interesting dual character analysis, I suppose, yet there is no personal growth or tragedy for either teacher or student throughout the entire story. There is no real closure. It just ends. While there are some interesting encounters in the narrative, such as a funny confrontation between Hoffman and a rather incredulous non-believer, as well as a memorable room-trashing scene by Phoenix, little excitement or drama occurs throughout the entire film. Nothing much happens at all. Phoenix wanders in a drunken haze, joins the cult, leaves, and then resumes his drunken haze.

The stylistic acting of Hoffman, Phoenix and, to a lesser extent, Adams, are what carry the movie, yet fail to raise it above mediocrity. The Master has an interesting idea, but it doesn’t execute it well. I guess the biggest disappointment with Paul Thomas Anderson’s latest film is that it lacks personality and tension — something that There Will Be Blood (2007) had in droves. I hesitate to call The Master a snoozer, because it’s packed with intelligence on a thematic level, and it boasts fine performances, but the end result nearly put me to sleep. And I’m damned hard to put to sleep in a theatre.

SUMMARY & RECOMMENDATION: The Master is conceptually dense and thematically deep, like any PTA film. Anderson endows his story with unique visual flair and uses Jonny Greenwood’s music to great effect. Phoenix and Hoffman are terrific.

— However… neither master nor apprentice have much of an arc throughout the film’s 143 minute running-time. The film lacks personality and drama, despite all its oddball characters. The Master is just slow as hell.

—> ON THE FENCE: Don’t expect another PTA masterpiece, but you could learn something about the methodology of cults and dramatic acting, I suppose.