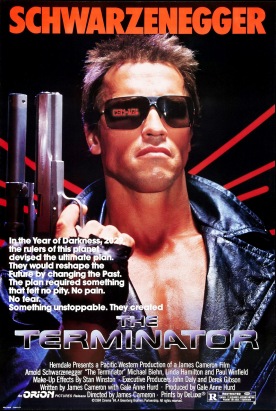 In honor of the presumably horrible Terminator: Genisys (2015), which releases today (July 1st) in the United States, let us go back to a simpler time when James Cameron was a young, unknown, up-and-coming filmmaker and Arnold Schwarzenegger was a recently retired Austrian bodybuilder who’d debuted in his first mainstream acting role, Conan the Barbarian (1982), just a couple years prior.

Cameron came up with the idea that would later become his iconic Terminator franchise after experiencing dreams of a robotic monster chasing him during the release of his first film, Piranha II: The Spawning (1981, the best movie ever with flying piranhas!). In the style of his idol, John Carpenter, as well as taking influences from gritty action films of the time (e.g. Mad Max [1979]), Cameron crafted a dark, brooding action-thriller about a cross-dimensional adventure where artificial intelligence becomes the bane of human existence and the keys to human survival are romantic and familial bonds that extend over time and space.

The Terminator (top, far left )will ensure a bleak future for the human race (bottom).

Much of the Terminator franchise’s modern legacy rests on the first film’s premise but the second film’s spectacle and character development. Most people forget how low-key, grim (in terms of both mood and actual lighting), and emotional the origins of the series really are. While Arnold Schwarzenegger is unforgettable here as the titular realization of cyborg death-incarnate, the beating heart and narrative core of the film (and by extension, the rest of the series) lie with Linda Hamilton’s Sarah Connor and Michael Biehn’s Kyle Reese.

The former is better known for her iconic portrayal of a wounded, psychologically tormented mother and guerrilla warrior in Terminator II: Judgement Day (1991), but it’s in this first film that the focus of the franchise is exclusively on her and all other narrative considerations are secondary. She has an amazing arc that features some of the best character development in cinematic history, and certainly the most noteworthy of any heroine in genre-cinema other than perhaps Sigourney Weaver’s Ellen Ripley in Aliens (1986, another Cameron classic).

Opposite her is her bodyguard and loyal defender (and eventual lover), Reese, played with stout admiration and class by Cameron-regular, Michael Biehn. Aliens is my favorite film, bar none, and the most important film I’ve watched during my adulthood, so imagine my surprise when I first saw Corporal Hicks’ young, adorable face squaring off against the one and only Terminator! I’ll always prefer his Colonial Marine role, but for the life of me I can’t understand why Biehn hasn’t achieved more mainstream fame for his key role in one of the most important science-fiction films ever. His chemistry with Hamilton is as memorable and heartfelt as his growth with Weaver in Aliens.

Rounding the last of our lead roles is, of course, Schwarzenegger himself. The role that would solidify him as a Hollywood icon is in hindsight one of his least typical performances. While one could argue that the man was born to play the role of a hulking, monotone giant hellbent on seeking and destroying those lesser than he, the bulk of Arnold’s career has been built on likable, charismatic lead performances in straightforward, shoot-em-up action films. The Terminator features plenty of hardcore violence and shooting, but the tone is quite moody and grim, the titular character has sparse dialogue and only a single one-liner (though a memorable one, to be sure), and no arc of which to speak. Arnold is more the enforcer and plot-driver, a device that sets the story in motion and keeps it so rather than a complete character. That being said, Schwarzenegger plays the role perfectly and justifies the T-800’s unquestionable status as one of the most ionic movie villains of all time.

Oddly enough, the biggest weaknesses with this first Terminator film are some of its technical, rather than storytelling, elements. Cameron can shoot action set-pieces like it’s nobody’s business, and he establishes his career-trademark grit and sci-fi spectacle with this movie, but in many respects his feature remains limited by the technology available to the crew at the time. Perhaps this justifies or explains the strength and timelessness of the narrative, but many of the practical effects on The Terminator leave much to be desired, and the stop-motion in the final factory-sequence hasn’t aged well at all. Shots where Arnold has to perform surgery on his robot face in one scene and others where a full, practical model of the robot endoskeleton are used in the latter sequence look terrible.

In addition, the 1980s-techno score doesn’t go with the picture at all. I know it was the 1980s and techno/synth soundtracks were all the rage back then, but the music just doesn’t jibe with the film’s tone and dark, bloody violence. It’s strange that in a generation where film scores were still considered grand, operatic, and yes memorable elements of mainstream movies (as opposed to modern times where scores are essentially background filler), one of the 1980s most famous films has a subpar, if not totally inappropriate, musical component.

Top: You might wanna run, now, Sarah… Bottom: Plastique is what’s for dinner.

Despite its non-insignificant technical shortcomings, though, The Terminator is a pile-driver of potent sci-fi and emotional storytelling. It features kickass action, great characters, great performances, and some stellar direction from one of the then soon-to-be action-movie masters. Again, the first Terminator was a little too ahead of its time, perhaps a little too ambitious in some respects, but it got the ball rolling on one of Hollywood’s greatest sci-fi franchises as well as the careers of two of the industry’s most important modern artists; not to mention, it features arguably the strongest story of the series and demonstrates how the potency of high-concept effects and gritty action can be multiplied tenfold when held together by the beating heart of searing human drama.

SUMMARY & RECOMMENDATION: James Cameron and Gale Anne Hurd write one of the best science-fiction stories of the past half-century, creating a brilliant premise with strong characters, a terrifying antagonist, and arguably the most underrated genre-romance ever. Hamilton and Biehn have great chemistry and grow and change like real people.

Schwarzenegger is as far from his likable, action-star badass persona that he would ever get, but he plays his part like no other person ever could or should. Though it would inevitably be outclassed in every way by its 1991-sequel, especially in terms of scale, The Terminator’s action is grueling and menacing to the core.

— However… numerous practical effects take you out of the experience, including and most memorably in the film’s final action-scene. The score has aged equally poorly.

? John Connor gave me a picture of you once. I didn’t know why at the time. It was very old – torn, faded. You were young like you are now. You seemed just a little sad. I used to always wonder what you were thinking at that moment. I memorized every line, every curve… I came across time for you, Sarah. I love you; I always have.